Turkey is my Camelot 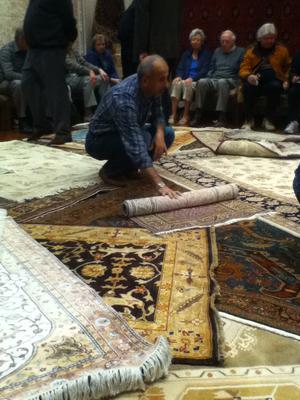 Another day of selling carpets - Istanbul 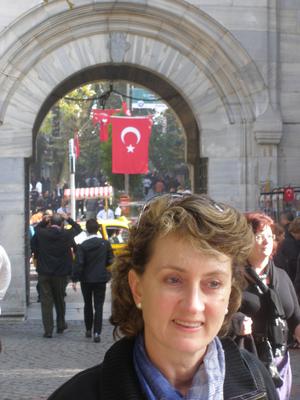 The author in Istanbul 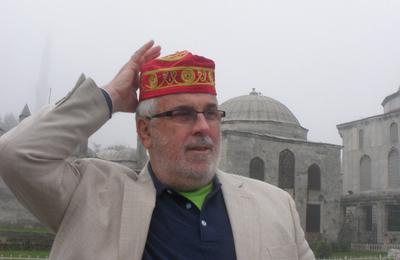 Author's husband and his fez - Istanbul 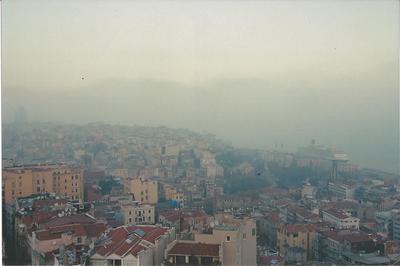 Istanbul at sunset from Galata Tower

I have come to see a lot of similarities between Turkey and Camelot probably because I find them both so alluring.

The Arthurian story, with its elements of war, magic, adventure and chivalry has touched the popular imagination and become part of the world's shared mythology. These same elements are embedded in Turkey's history with Istanbul as the jewel in the crown, fought over by Greeks, Persians, Spartans and Romans with the Ottomans finally triumphing in the 14th century.

The 20th century saw Turkey involved in a world war, and the people gained a new, enigmatic leader. Mustafa Kemal Ataturk, a modern day King Arthur, created a new political and legal system, made both government and education secular, gave equal rights to women, changed the alphabet and the attire, and advanced the arts and the sciences, agriculture and industry.

The landscape of Istanbul would change too, as large historic parts of the city were demolished to make space for new buildings and highways and Istanbul lost its status as the capital of an empire. I wonder what the Ottoman, Suleiman the Magnificent, would think of the modern Istanbul from his final resting place, a domed mausoleum attached to the Süleymaniye Mosque.

Today Camelot still remains a myth but Istanbul is a pulsing, enigmatic city, albeit one that struggles to retain its heritage as the portal between two worlds.

I first fell in love with Turkey, and Istanbul, as a young, wide-eyed backpacker in the late 1980s.

Then I returned briefly in 2010 on a Mediterranean cruise aboard Cunard's Queen Victoria. These few days in Turkish ports were short moments in my life and a blip in the history of that country but they reawakened my senses and left me in awe of this magical place.

I was brimming with anticipation as Queen Victoria journeyed from the Aegean into the Sea of Marmara, then through the Dardanelles and past Gallipoli, where Ataturk erected his monument to the chivalry and valour of Turkey's fallen sons and their combatants from the allied forces. We wound through the curves of the Bosporus Strait with Europe on our port side and Asia to starboard.

As we approached our berth in the Golden Horn I was in the ship's gym (situated in the bow with floor to ceiling glass windows), where Istanbul's mosques and minarets loomed large as I ran on the treadmill to greet them.

Early next morning we dutifully took our seats on a bus for a tour of the Blue Mosque and Hagia Sophia. We waited in queues that weaved through the grounds and gardens like some mythic dragon guarding the Sultan's secrets, its many heads the numbered signs held high by excitable tour guides.

After the tour we were driven to a designated carpet store in an unremarkable building where wizened men unfurled, spun and twirled the carpets into a spectacular dance for their captive audience.

Any magic they created for us in the hope that these Cunard passengers would spend up big was dispelled by the cynical salesmen and the historically stale simits we were fed, washed down with cheap cai.

After escaping from their lair we headed straight to the Grand Bazaar to make our own marketing decisions. One step inside this glorious centre of commerce and I was under a spell. I was on a mission to venture down as many alleyways and corridors as possible in the next hour and a half before the return bus trip to Queen Victoria.

Of course I could have moved a lot faster without my family by my side, but as I'd spent endless hours exploring the Bazaar by myself many years earlier, I guess I could accommodate their slower pace.

I wasn't searching for the Holy Grail but I was damned sure I was going to snag a special souvenir - but where to begin? As we already had our leather coats from Kusadasi and I didn't need any more carpets I had to be strategic in my quest.

The Grand Bazaar is like Merlin's cave, where I'm pretty sure you can find almost anything, for a price. I settled on a pair of faux Rayban sunglasses, silk pashminas for gifts and an I Love Istanbul t-shirt for my daughter, who was collecting them in every port we visited.

My husband had already succumbed to the souvenir sellers outside the Blue Mosque, buying 2 fez hats in different colours, presumably to suit different moods.

After a late lunch on board I was hankering to get back into the thriving metropolis so I headed off with my heavy SLR Nikon F60 (11 years old at the time and not digital) and a plan to go to Taksim Square. I didn't get that far. Instead I alighted the tram just before it crossed Galata Bridge and headed up the steepest hill I could find. I passed cafes perched on the side of the cliff and unique boutiques on hairpin bends.

At the top of the hill I discovered a castle; small but worthy of Camelot. It turned out to be Galata Tower which truly does have a medieval history. I had no idea what was inside but felt compelled to join the queue. After paying a small entrance fee and catching a tiny lift to the top I couldn't have been more pleased: I was a little bit closer to heaven and from there I could gaze down over the kingdom, and what a sight it was.

The top of the tower has glass windows that offer a panoramic view, however the external viewing area was so narrow it was impossible not to body hug anybody else trying to pass or go the opposite way around the tower. I drank in the views of the city, the Golden Horn, the Bosporous and the Sea of Mamara and the beauty was only dimmed by the fading light as the sun set on this magnificent vista. I took as many photos as I could but knew that I was dabbling with disaster as Queen Victoria was due to sail at 5.30pm.

I can only imagine what would have happened if I hadn't made it back to the dock in time because I did make it back with about 15 minutes to spare. Of course my teenage daughter and my mother were in meltdown because my name was called out many times over the ship's loudspeakers, only adding to their increasing worries about my safety.

My husband, my knight in a shining fez, didn't appear to be phased at all as he sat at a round table watching Istanbul out the window. I like to think that it was because he trusts in my spirit of adventure and knew that if I had been stranded there I would have made a great life for myself in Turkey.
And when the family came to visit me we would all sit and chat over tiny glasses of apple cai with sugar lumps on the side, and we would look at the sun glinting on the water, and we would smile.

In reality I am a daughter, wife and mother and, as a passenger aboard Cunard's Queen Victoria I had other ports to visit, sail-away parties to attend, and stories to tell of my wonderful visit back to Istanbul.


Having trouble finding what you need? International Travel Writers Index and Map