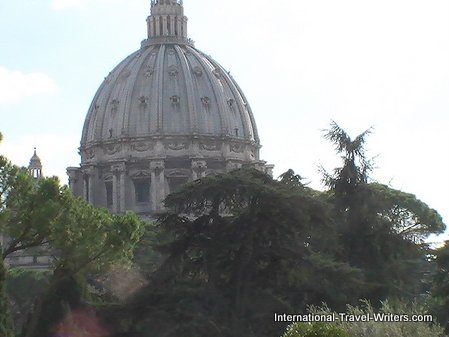 The Dome of the Saint Peter Basilica is visible from numerous locations in Rome. It is interesting to note that there are similar domes modeled after this one. Saint Paul’s in London (1675), Les Invalides in Paris (1680-1691), and the Capital building in Washington, D.C. (1794-1817).

We were pleasantly surprised to find that the dome was visible from the Bramante Terrace dining room in our superb and historical accommodations in Rome, the Hotel Raphael.

Since there are hordes of tourists that form lengthy lines at the Vatican, the very competent reception staff at the hotel suggested we take a private tour. We’d skip the lines plus have an educated historian to explain many of the features we would see in both the Vatican and the Basilica.

The company they contacted was “The Eyes of Rome” and our assigned guide was Mike Botula, an American currently living in Rome. He was a walking encyclopedia and he knew a lot of facts that weren’t common knowledge. It was a breeze getting inside the areas and bypassing the crowds. This company is highly recommended and especially if you choose Mike. 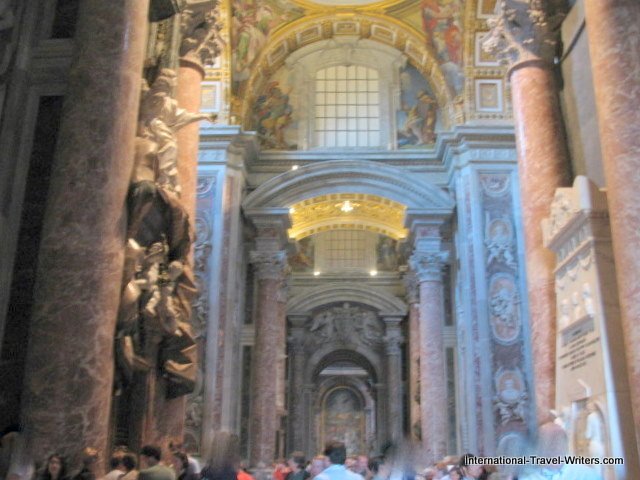 When you enter Saint Peter Basilica, which is a structure designed as a Latin cross, the enormity and magnificence of the interior is overwhelming. The length of the basilica is over 600 feet and is around 190 feet wide not counting the right and left channels of the cross structure design, plus the height of the vault in the nave is as high as a 15 storey building. Impressive…you bet!

The center is an octagon decorated with Baroque stuccos, statues, and mosaics. There are niches filled with statues of saints who were founders of various religious orders and congregations. 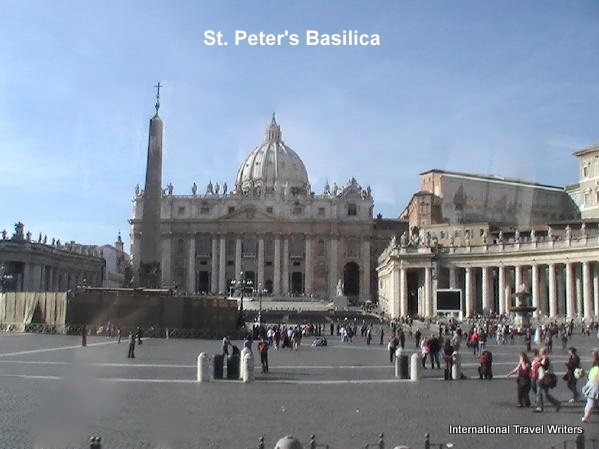 A synopsis of what we learned is that the construction of Saint Peter Basilica was authorized in 324 A.D. by Constantine, the first Christian Emperor. This basically signaled that Christians were allowed to build places to worship.

The new basilica was to enclose Peter’s tomb and make it the focal center of the building as a symbolic shrine close to where the apostle was buried in 64 A.D. Centuries passed with little significant activity other than church functions.

Then Charlemagne was crowned emperor of the Holy Roman Empire in Saint Peter Basilica in 800 A.D. Time marched on again and in the early 14th century pilgrims started to travel on foot from vast distances so they could honor St. Peter. It was then obvious that the basilica had seen better days…it was over a thousand years old.

When Pope Julius II was elected in 1503 he entrusted the task of rebuilding to the great architect, Donato Bramante. Within 10 years both of those men were dead, the project was unfinished and political wrangling kept things at a stand-still for years.

After a succession of planners, architects, even artists including Michelangelo and Bernini… the work on the basilica took until 1626 to get done and it wasn’t until 1656-1667 that Bernini planned and constructed the great St. Peter’s Square. 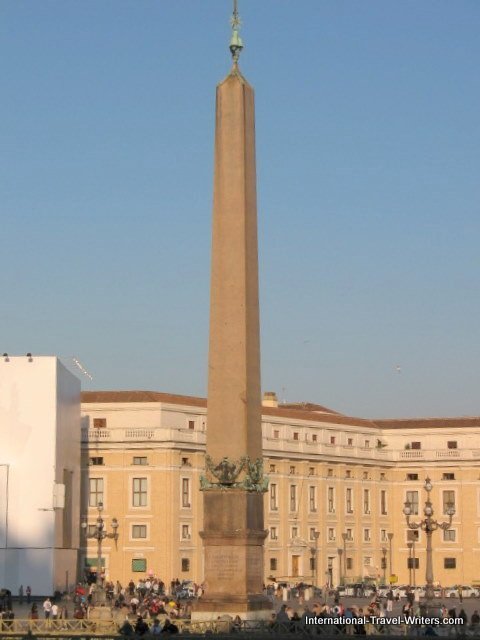 The 1st Century obelisk that originally was set in the centre of Caligula’s Circus, where St. Peter was martyred, was moved to St. Peter’s Square in 1585 and it makes an impressive centerpiece to this huge open space. 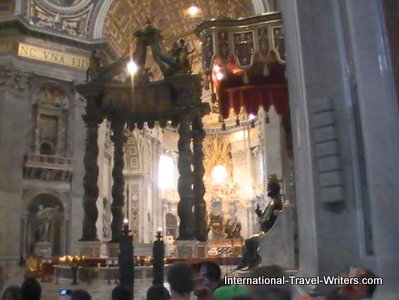 The bronze and gold altar inside the Saint Peter Basilica is called the Baldachin Altar. This is located directly above the tomb of St. Peter. The combination of the altar and canopy is a Bernini masterpiece that was built between 1624 and 1633. 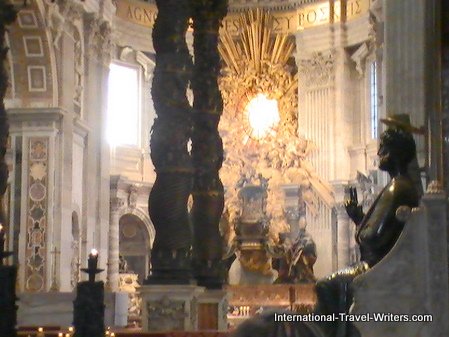 The chair of Saint Peter is shown at the back of the massive bronze Benini canopy structure. You can see the glow of the gilding and it has detailed carvings within it. 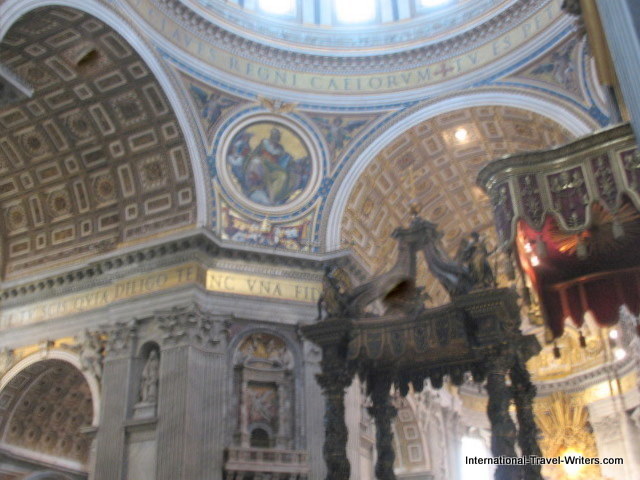 The canopy is a massive monument and this is the peak. Surrounding the area above are mosaics of some of the saints. It stands nearly 95 feet high. 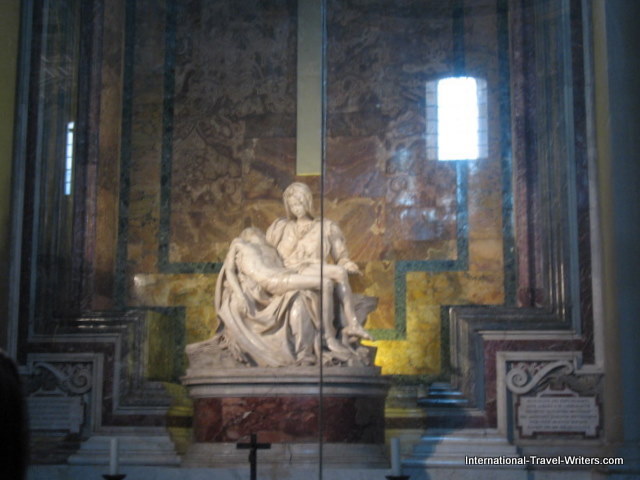 Michelangelo’s Pieta (1498-1499) is in the first chapel, shielded by thick glass. Our tour guide, Mike, told us that some person with a mental problem burst into the area in 1972 and tried to damage the priceless work of art with a hammer so it was deemed expedient to protect it with bullet-proof glass.

Michelangelo created this wondrous work in Carrara marble when he was only 24 years old. It balances the Renaissance ideals of classical beauty with naturalism. Madonna, as she cradles the dead body of her son has an expression of acceptance.

I found it touching that she was portrayed by the artist as youthful and not the aging mother that she must have been. She cradles him gently and lovingly in her arms as he’d left this world, in the same manner as she'd done when he was a baby entering this world.

This is the only work signed by the artist. It was commissioned for the French Cardinal Jean de Billheres as his funeral monument but it was moved to Saint Peter Basilica in the 18th century. 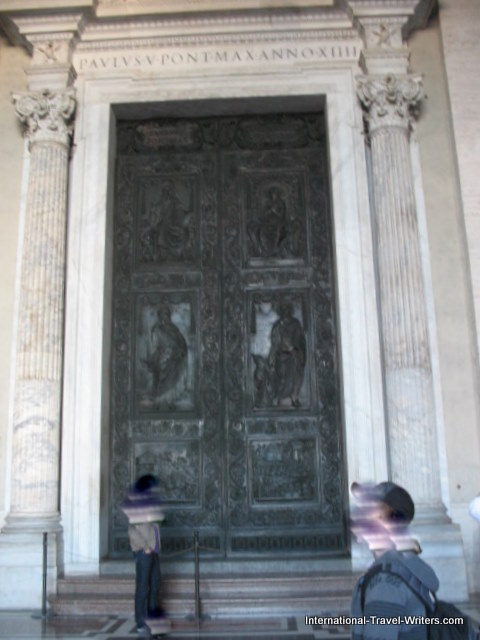 On the right side of the main entrance is a door by Venanzio Crocetti (1965). This door is called the "Door of the Sacraments". It has two rows of 4 panels each showing the seven sacraments.

Another door to look for is an older door in Saint Peter Basilica which is a massive bronze door that was made for the old St. Peters' by Filarete in 1445 and it was moved to the new structure because of its artistic and historical significance.

The panels have impressions, the major ones are of St. Paul sentenced by Nero, the martyrdom of St. Peter and St. Peter giving the keys to Pope Eligenius IV. 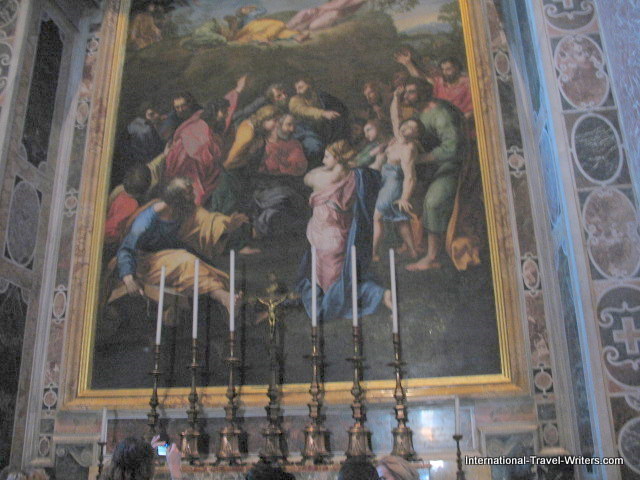 The Alter of the Transfiguration is a mosaic based on the 1520 Raphael's "deathbed" painting. It took six artists around 9 years to create the mosaic which was completed in 1767. Saint Peter Basilica is an appropriate home for it. 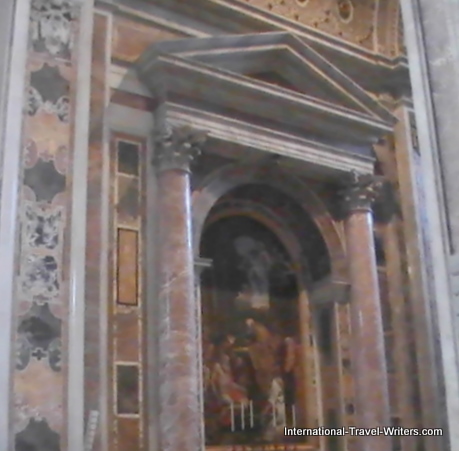 There are numerous altars in Saint Peter Basilica (I believe I read that there were 45) and one of the major ones is the Altar of St. Jerome, a 1744 mosaic of Domenichino's "Last Communion of St. Jerome". The body of Pope John XXIII (1963) is enclosed in glass beneath it. 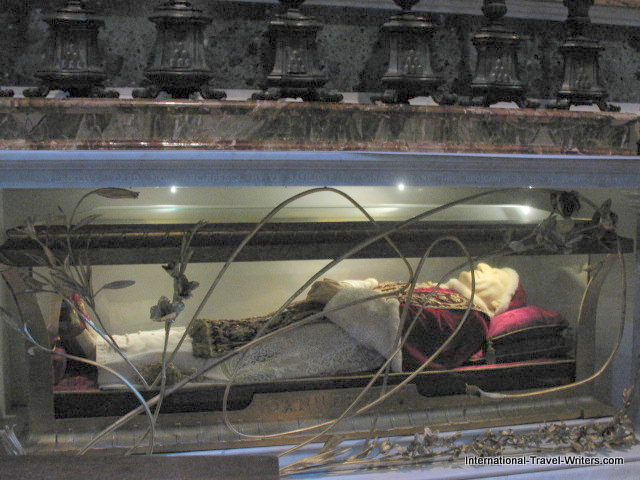 The body of Pope John XXIII is amazingly well preserved looking. An urban legend is that the coffin was a few inches too short for his body so they removed a few inches of bones above his ankles and re-attached them so that he could fit. Who really knows? 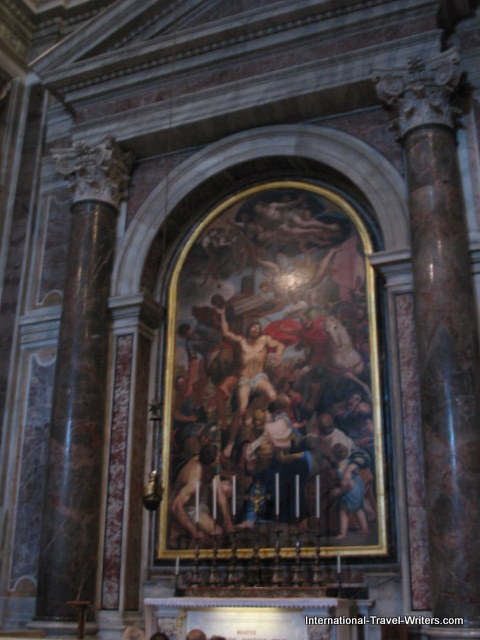 The Chapel of St. Sebastian is the monument of the Tomb of Pope Innocent XI. 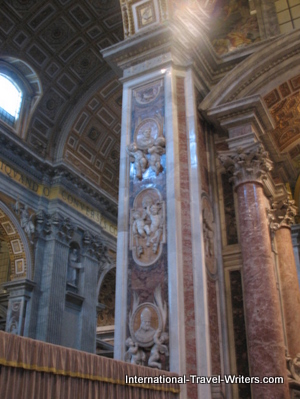 It is absolutely mind-boggling how many pillars have impressions, carvings, reliefs and mosaics that honor past Popes that aren't named prominently (unless there are some small Latin terms unbeknownst to me). The sheer magnitude of carvings, statues and grande arte contained in Saint Peter Basilica just left me awestruck. 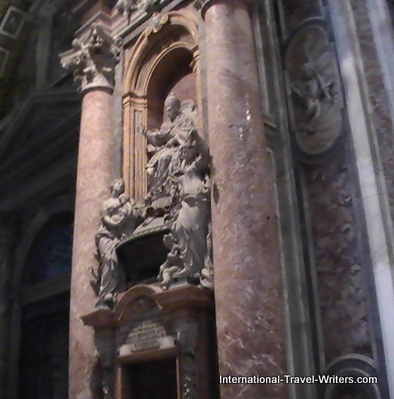 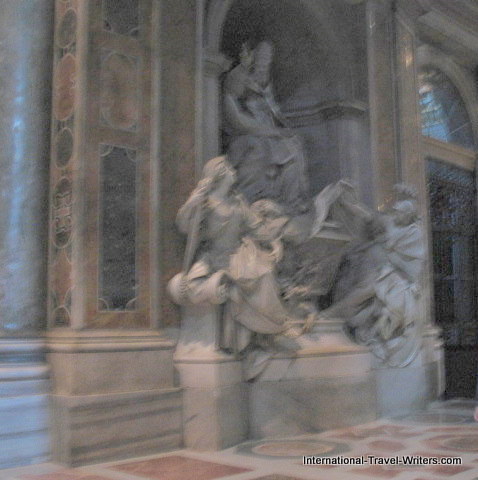 Unfortunately this is a very bad and blurry photo of the Monument to Pope Gregory XIII (1572-85) done by the sculptor from Milan, Camillo Rusconi (1723). The statue sits on top of the urn which is covered with a relief showing the Gregorian Calendar. On the right it shows Wisdom raising the drapery revealing Science and on the left is the allegory of Religion holding the tablets of law. At the bottom is a dragon, a symbol of the Pope's family crest. Sorry it is so hard to see. It was "oops with the camera settings again"........... 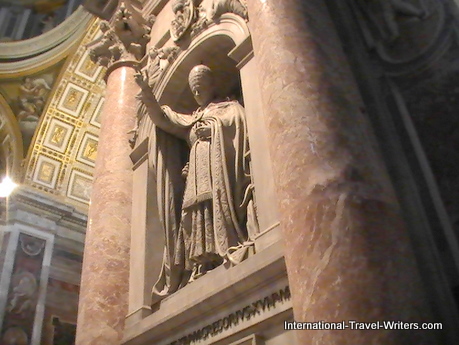 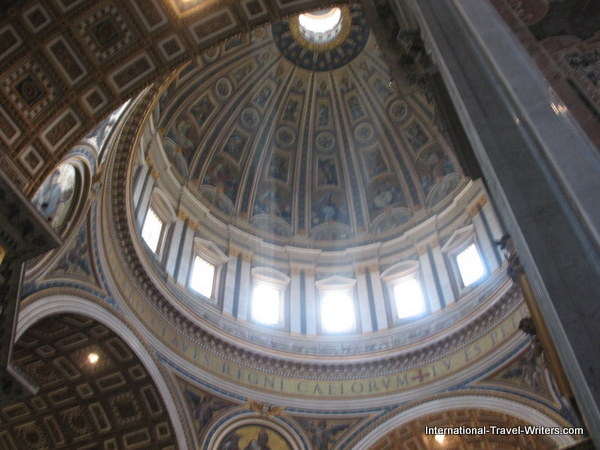 This is the Michelangelo Dome that was finished by Giacomo dell Porta in 1590. You can purchase a ticket to view the dome via elevator or you can climb the stairs. From there you can get a terrific view of Saint Peter Square and Rome. 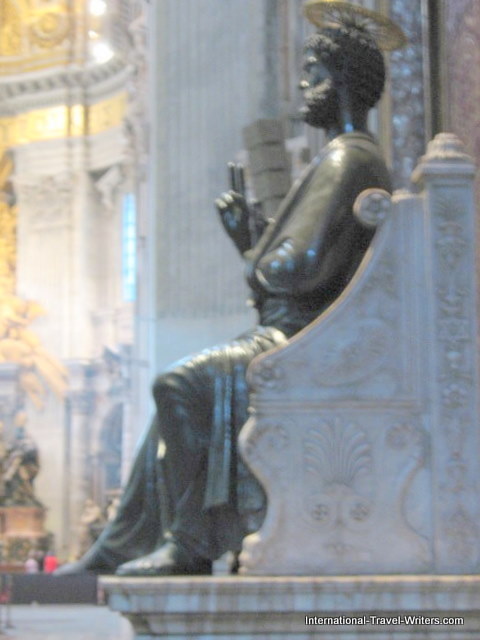 There is a controversy whether this is a 5rd century Bronze of St. Peter Enthroned or if it was done by Arnolfo di Cabio (1245-1302). Also housed in Saint Peter Basilica are four huge statues depicting persons that were important to Christ during critical moments.

One is St. Longinus, the soldier who pierced Christ's side with his spear but later became Christian; St. Helen, Emperor Constantine's mother, who brought the cross and nails from the Crucifixion to Rome; St. Andrew, Peter's brother, who was crucified in Greece; and St. Veronica, who wiped Christ's face with a cloth on the road to Calvary. Bernini did one and the other three were done by his pupils. 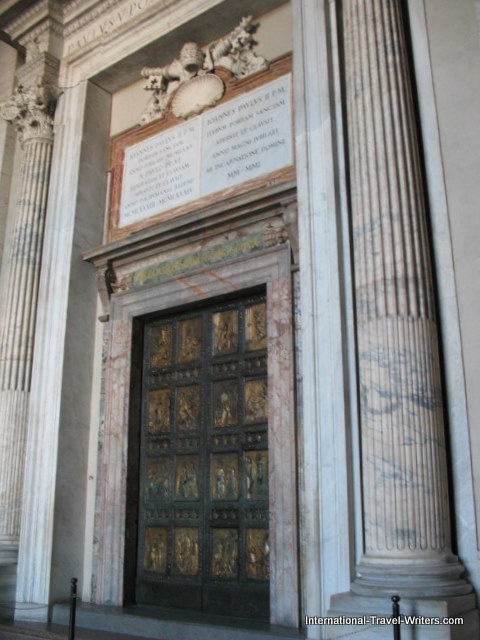 The "Holy Door" is bricked up on the inside and on the first day of the Holy Year the Pope bludgeons the brick wall with a hammer and opens the door. It is closed by the Pope at the end of the Holy Year which is celebrated in Saint Peter Basilica every 25 years. The bronze panels of the door were made by Vico Consorti. They replace the wooden panels made in 1749. 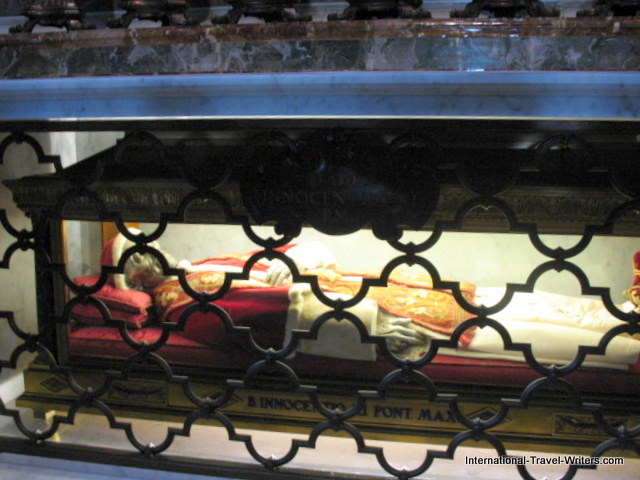 This is the body of Pope Pius X that is situated under the Presentation Chapel. 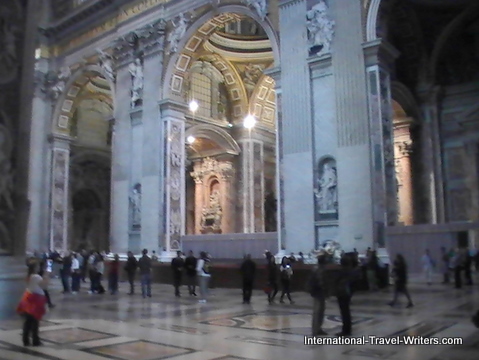 Everywhere you turn, whether you look up, down or sideways, you see statues in niches and an abundance of altars and mosaics. Since it is dark inside it is difficult to get good photos so take your time.

Unfortunately I rushed and ruined some fine pictures and didn't take the time to check prior to leaving the basilica. My camera is capable of taking better pictures but it was a case of "operator errors". 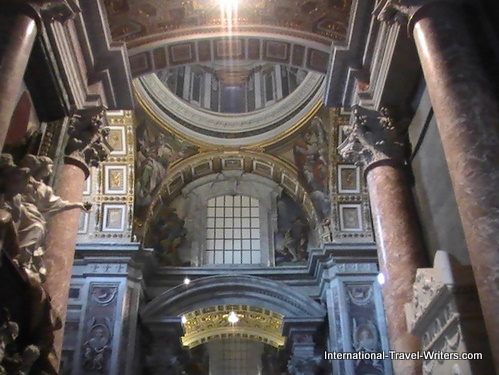 Pope Pius XI authorized excavations beneath the Vatican in 1940. He wanted to be buried closer to the tomb and bones of St. Peter. The bones, purported to be St. Peter's, rest in a stone cavity behind very thick Plexiglas. To tour this area, you must apply six months in advance of your visit, give your passport details and then wait. Not everyone is approved but it is worth the wait in order to see the "Scavi".