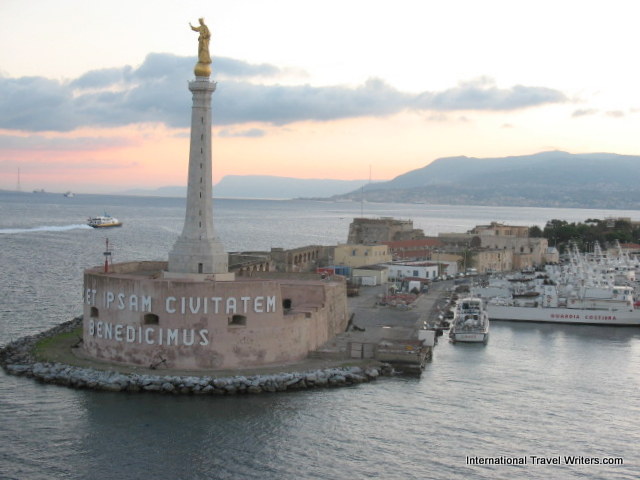 Messina, the capitol of Sicily, was our next port of call. As we headed into the harbor the sun was just rising. The Madonnina of Port stood proudly atop a high pillar. The city was supposedly founded by Greek colonists in the 8thcentury B.C. but legends suggest they were pirates.

The following centuries were comprised of turbulence, wars, and power struggles (such as the city being sacked by the Carthaginians and then reconquered by Dionysius I of Syracuse).

The Mamertines (Italian born mercenaries hired by Syracuse) eventually overthrew those from Syracuse and requested an alliance with the Roman Republic. So in 264 BC, Roman troops were deployed to Sicily, and this was the first time a Roman army acted outside the Italian Peninsula. 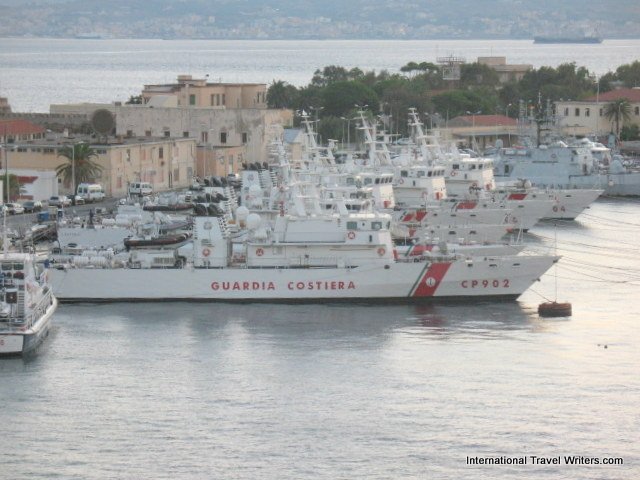 As we entered the harbor we saw the Coast Guard ships that had been in port overnight. They would resume their duties as the sun came up. When you stop to think, you realize that throughout the Middle Ages, Messina was a port of great significance. European knights on their way to the Crusades stopped over and even Richard the Lionheart and King Philip II of France stopped in 1190. As a matter of fact it was this cathedral where Richard the Lionheart 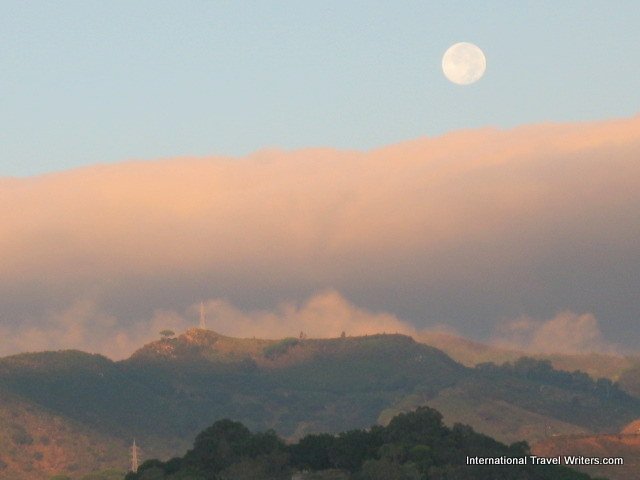 We turned to the left view from our balcony and saw a surreal vision. It looked like a lunar landscape as the sun started to beam through the low mist over the hills and the moon had not yet disappeared. It gave an unearthly sensation of being part of another world but the moment passed. We knew the steep hills lining the coast before heading west to the Nebrodi range are called the Peloritan Mountains and that was the area we were viewing. 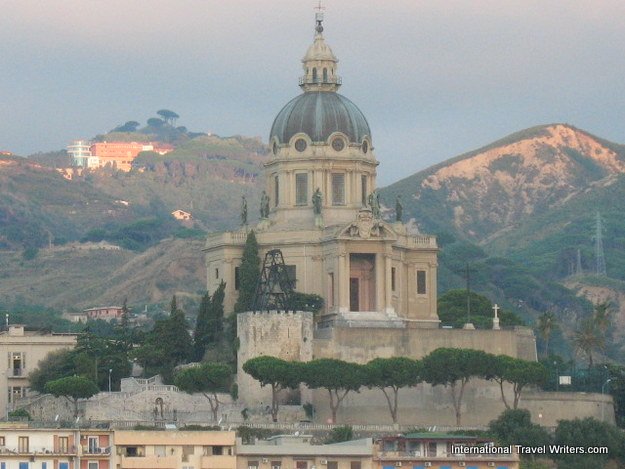 Turning the camera back to view what was in front of us we saw the Shrine of Cristo Re and we were able to zoom the lens closer. The Tempio Votivo di Cristo Re (Votive Temple of Christ the King) was built in 1900 in the Baroque style. It has a crypt with a shrine inside that is a memorial to Italian soldiers. The bell, the 3rd largest in Italy, chimes in memory of all those who fell in all wars.

We opted to take the tour called Highlights of Messina that is listed above mainly because it would give us a cross section of the city and its surroundings. The tour included famous sites such as the Cathedral, Shrine of Cristo Re, Ganzirri Lake as well as the huge Clock Tower and the Orion Fountain (seen above). More detail is given on the page called Piazza Duomo. 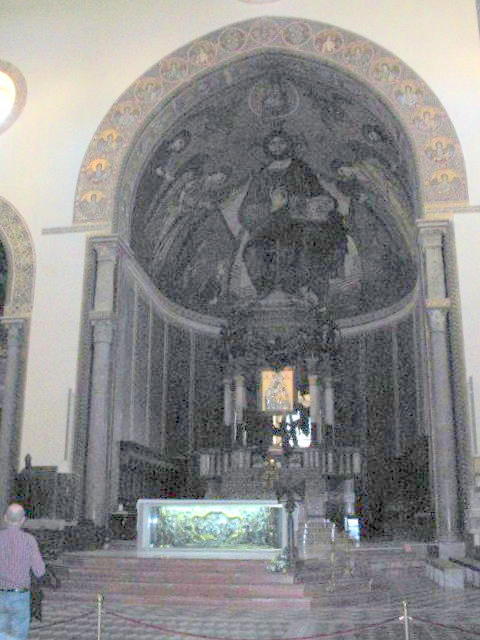 The altar of the Cathedral was begun in 1628 and not completed until the end of the 18th century. In 1930 the largest organ in Italy (3rd largest in Europe) was added. 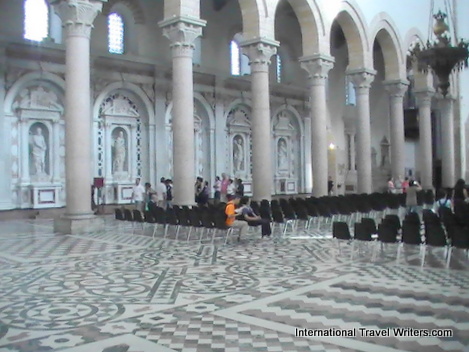 In the 16th century a marble inlay floor was designed. The statues of the Apostolates line the side walls of the naves as you can see here past the pillars. 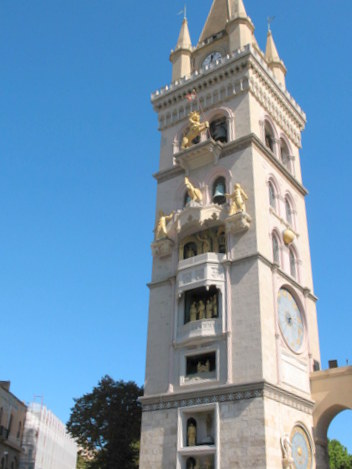 The famous 197 foot Astronomical Clock Tower attracts numerous tourist and residents every day at noon to watch the animated ritualistic sequences while Ave Maria is playing over the loudspeakers. 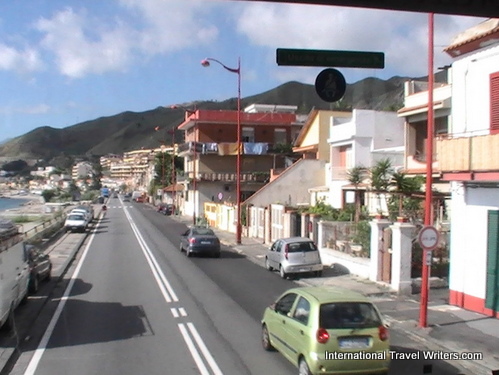 As we embarked on the drive to Ganzirri Lake we observed the small shops, restaurants and hotels that lined the waterfront. 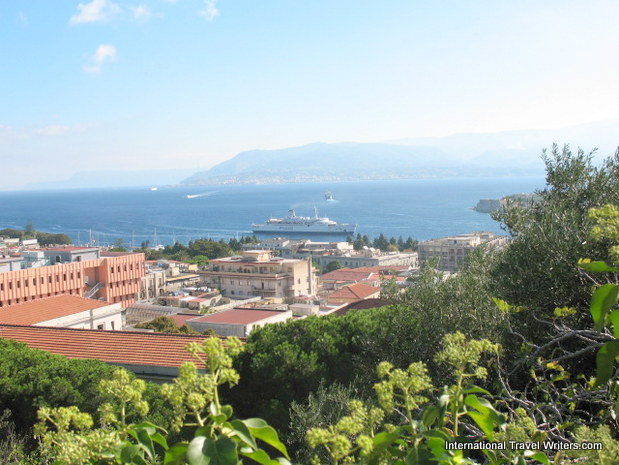 The road wound partially away from the water for a few miles and the views over the Strait of Messina were spectacular. 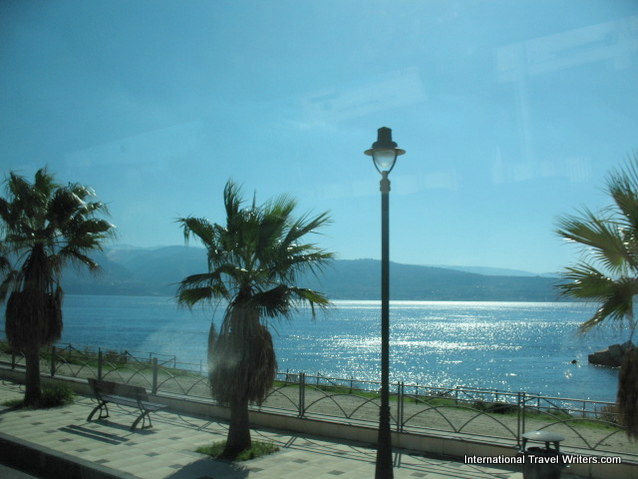 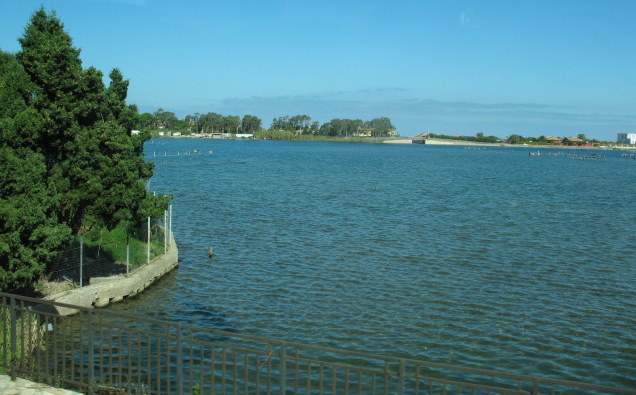 Ganzirri Lake is a salt-water lake with the best mussels around according to our guide. The lake is surrounded by a very small town of around 200 residents but in the summer, the same guide said that the area is filled with young people enjoying the beaches, restaurants and bars. 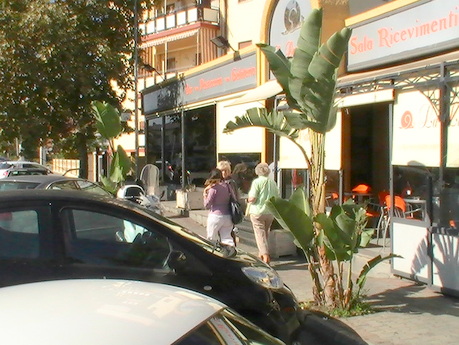 On the return drive from Ganzirri Lake there was a short stop for refreshments and time to use facilities. The area was resort-like and the people were friendly and smiling. Seemed like a nice area to stay for a few days on a future visit. We had a few more highlights to see before returning to the ship. 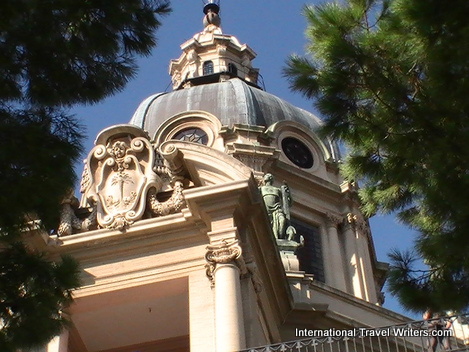 We were finally up close and personal with the Shrine of Cristo Re and it is a magnificent structure. This was the Shrine that we had seen high on the hill as we arrived in the harbor. The location was originally used for a fortress. 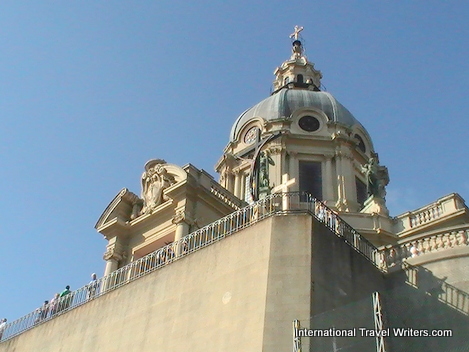 Constructed around 1900, the Tempio Votivo de Cristo Re (Votive Temple of Christ the King), is built on very high and elevated ground. Topping the structure is an octagonal dome and the style is reminiscent of baroque. Built over the remains of the Matagrifone Castle and fortress it has been a place of reverence for many years.

It has a crypt with a shrine inside which is a memorial to Italian soldiers. 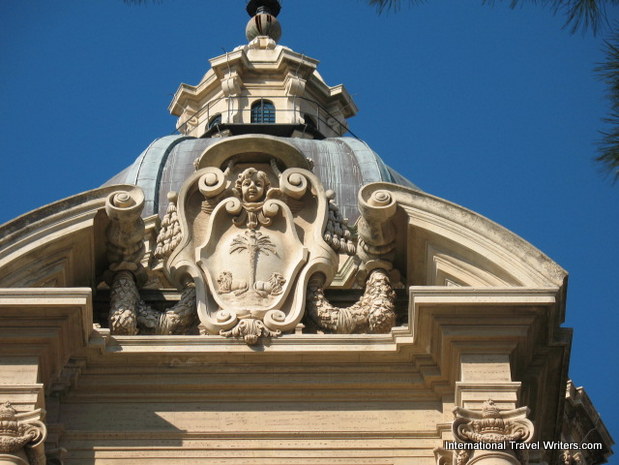 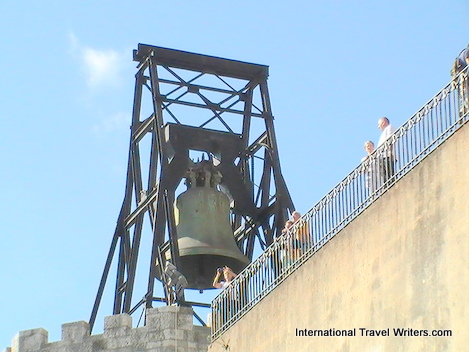 The Shrine of Cristo Re has the third largest bell tower in Italy. The bell sounds in memory of those who died in wars. 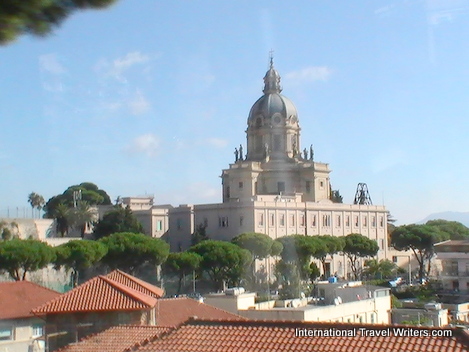 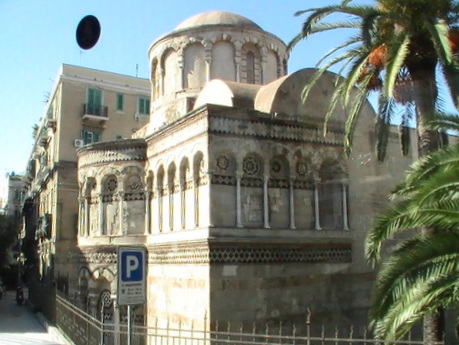 This location actually dates back to a pagan temple dedicated to Neptune and it was on these ruins that this church was erected (somewhere between 1150 and 1200).

Photos of the Church of the Annunciation of the Catalans (both above and below) show the cylindrical apse and high dome. It dates from the late Norman period and it was transformed in the 13th century. It shows some Arabic influences. 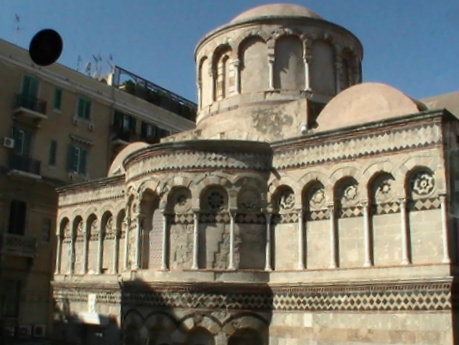 It is the only building to have survived the 1908 earthquake without major damage. The earthquake only pealed away outer layers of additions to the church added over the centuries...leaving the original structure and style intact. Some of the geometrical patterns are made from volcanic glass. The church has a Latin-cross ground plan with a nave and side aisles. 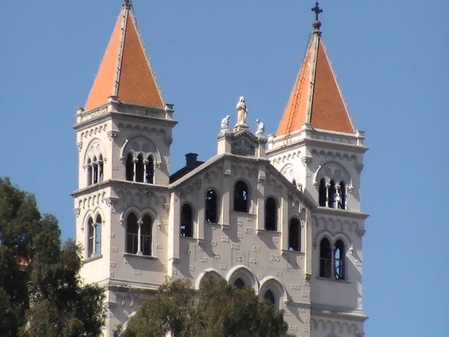 The sanctuary of Madonna di Montalto is located in Messina. It is very prominent on the hill of Caperrina. According to Wikipedia it was the first church rebuilt after the earthquake, and the sanctuary is in the tradition of a church in defense of Messina besieged by the French during the War of the Vespers (Our Lady of Victories).

The façade, facing the sea, was rebuilt in 1930 with two towers flanking this façade with prominent spires. Even from the square in front of this church, there is the view on the Strait of Messina , praised by Pope John Paul II during his visit to the city of 1988 . 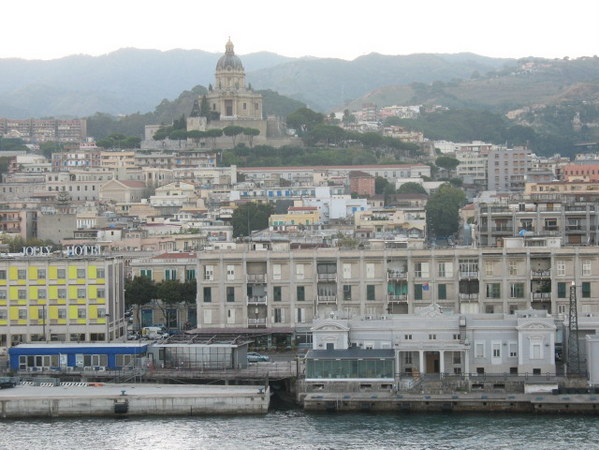 As we pulled out of the harbor we were still able to see the Shrine of Cristo Re, rising above the city and overlooking the Strait of Messina. I think this is an image of the city that many retain in their memories when they think fondly of Sicily.