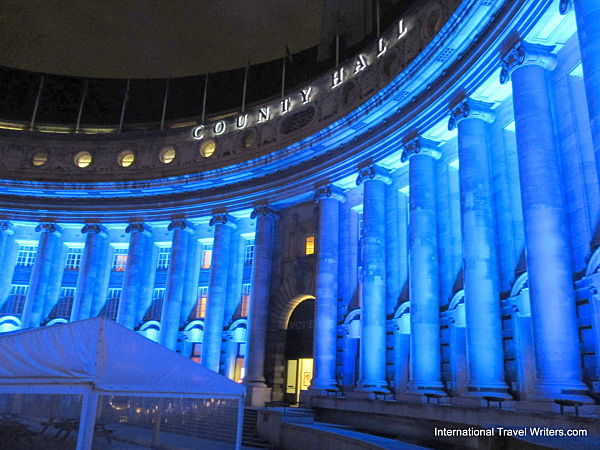 Marriott County Hall wasn't on our radar when we opted to visit London for a couple of days prior to taking a cruise out of Barcelona.  London has thousands of hotel rooms throughout the city so we narrowed our criteria for our accommodations to (1) hotels with a view of Big Ben and the River Thames, (2) a familiar hotel company with a good reputation and (3) a location near some major landmarks.  Voila!   Our chosen hotel was a landmark in its own right...with just the right whiff of  sophistication that we sought.

Our room is the top light showing in the dark center section (we had the curtains closed on two of the three windows. 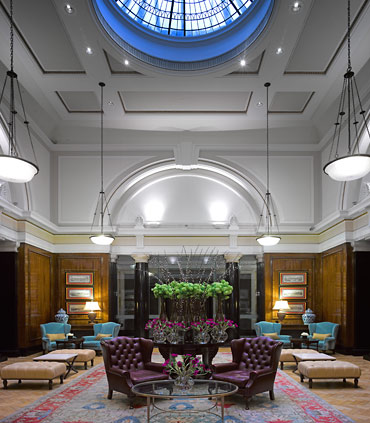 The Marriott County Hall London has an impressive arched vehicle entry that our cab drove through.  We came to a halt at the main entrance where the bellmen were ready to assist and get us speedily inside.  The lobby was massive.  The wood paneling projected a warmer, more intimate feel.

Our flight arrived earlier than check-in so we were thrilled to discover that our accommodations included a pass to the VIP lounge where you can use the WI-FI (it's in all rooms), have complimentary biscuits, coffee, sodas, and an amazing selection of teas.  There was also a flat screen TV so we lounged and watched the current news while we waited to be alerted that our room was ready.  Our flight from Seattle had been non-stop on British Airways so we looked forward to a short nap before meeting with friends for dinner. 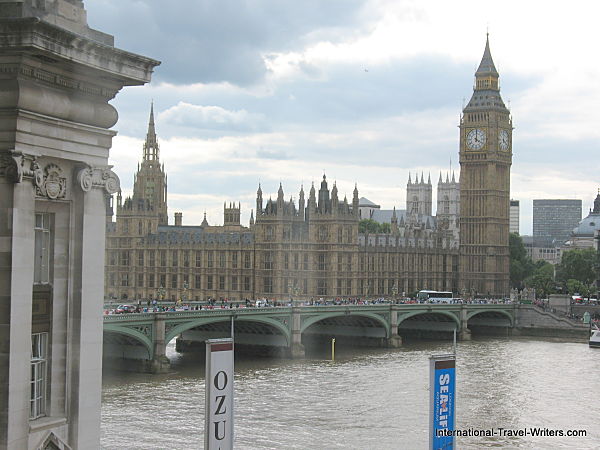 We had delayed our travel until the Olympics were over rather than arrive smack dab into the middle of crowded venues.  The events had ceased just days before but there was still a residual of the swarms obviously enjoying a few days sightseeing prior to heading home .  It was late August and London was still abuzz, but unfortunately, the weather was overcast and rather dull.

(Above is one of the views from our room)  We wanted to view Big Ben and the Thames...this certainly hit the mark.  You can see part of the hotel's pillar on the left. 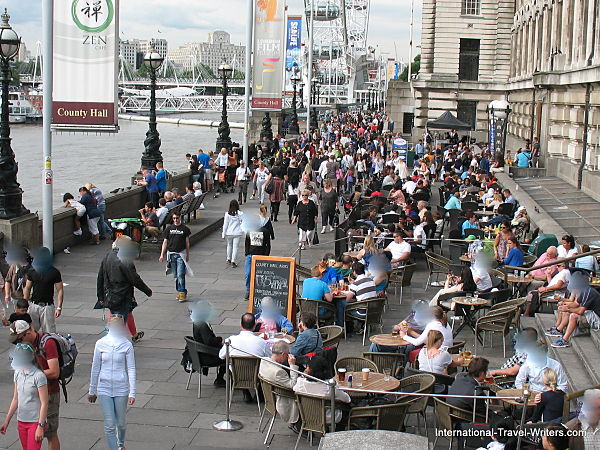 The hotel's waterfront walk led to the Millenium Pier and the London Eye which you can see above at the top center of the photo.  Outdoor tables were strategically aligned to allow visitors to enjoy beverages and snacks served from a cafe outlet nearby. 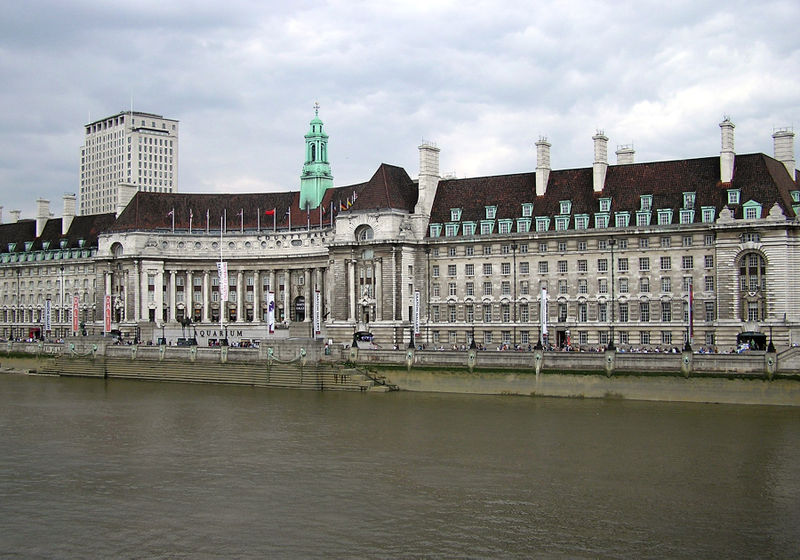 Marriott County Hall London encompassed more than we realized.  The Marriott section is seen between the two projections (shown above) that are topped with a green tower...and it goes inward making a semi-circle.  Beneath its outside patio is the Sea Life London Aquarium.  To the left, with a high building behind it, is the Premier Inn which is a budget hotel.  To the left of them (not in view) is the London Eye outside and inside the Zen China restaurant.  On the right, the flat faced facade with the white chimneys houses 605 private residential flats (with parking) that were converted between 1995 and 1996.

County Hall is on the south bank of the River Thames, just north of Westminster Bridge, facing west toward the Palace of Westminster.  The main six storey building is faced in Portland stone in an Edwardian Baroque style.  It was opened in 1922 by King George V.  The other sections were added between 1936 and 1939.  It ceased being used as a seat of London's government in 1986 and took a circuitous route being passed around until it was sold to private investors in the 1990's.

Today County Hall is the site of businesses (we saw dentist offices), it has a Namco Funscape for everyone not just kids (bowling, bumper-cars, video-games, simulators, etc.)  The center also has pool tables and a licensed bar & grill.  The relocated London Dungeon is due to open in early 2013...that sounds like fun! 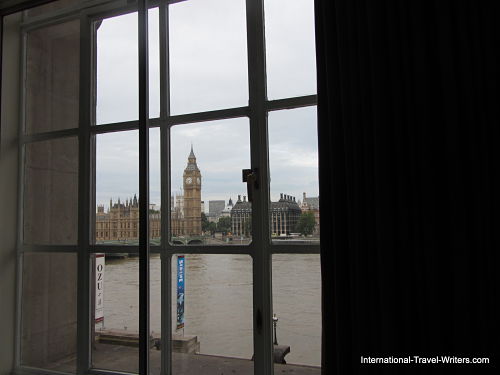 Through the windows, Big Ben and the Palace of Westminster (the Houses of Parliament) were visible from two of the three windows (this is the middle window). 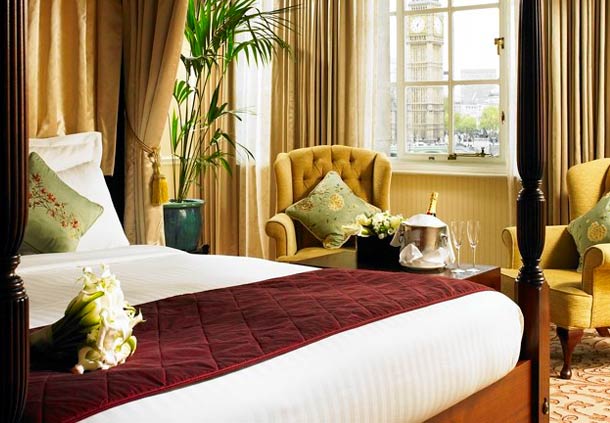 This is a professional photo of Room 344 that I obtained from the Marriott website.  It is much brighter than anything I was able to capture, plus it is an accurate depiction of part of the actual room that we were occupying. 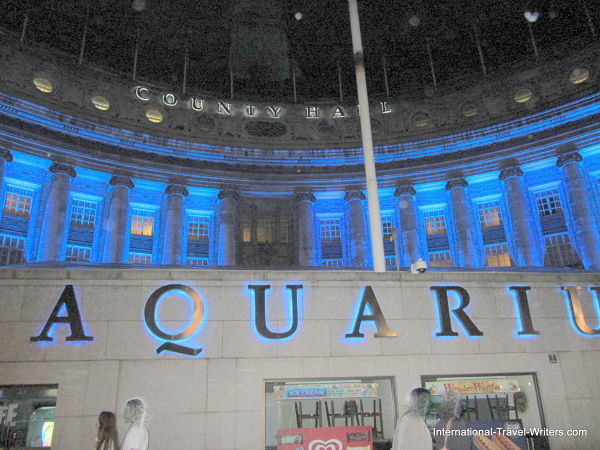 The Sea Life London Aquarium is adjacent/beneath the hotel. Visitors can come face to face with sharks, watch piranhas at feeding time and see rays up close when they come to the surface at the Ray Pool.  It opened in 1997 and occupied 3 floors.  More than 3000 species of sea animals and plants can be viewed in more than 50 water tanks.

Our room, #344, is seen above the letter U.  It is the one without the blue lights and we considered it to be a prime location for viewing many areas of the activities on the Thames.

The Marriott County Hall has been modernized and you can see the bathroom is certainly revamped to American standards.  The bathtub was larger than it looks in the photo and the comfort of the Four Poster Bed was superb.  Didn't even wake up with Big Ben! 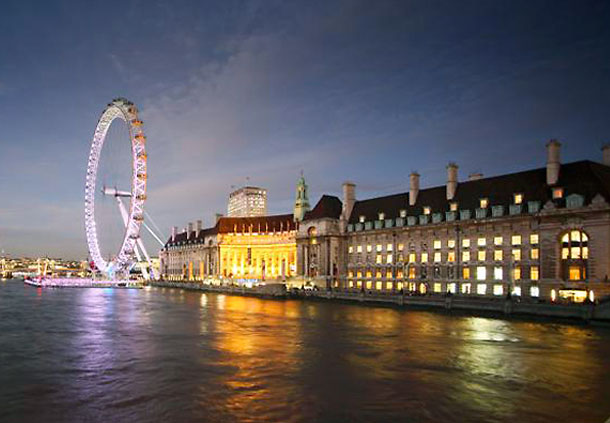 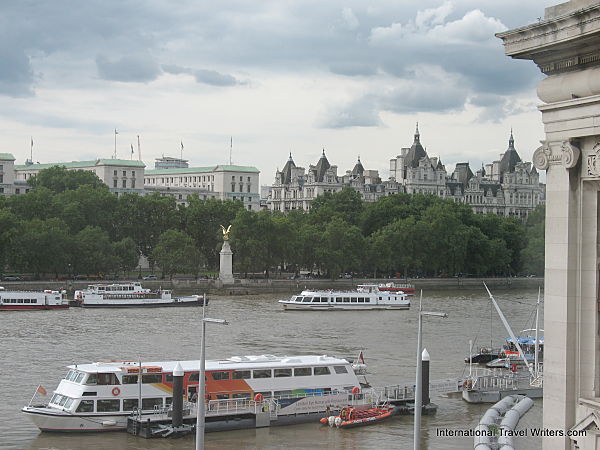 This was the view from our third window.  This time you can see a hotel pillar on the right.  Ferries maneuvered amongst other river traffic and it appeared to be busy most of the time...at least when we glanced out it was quite active. 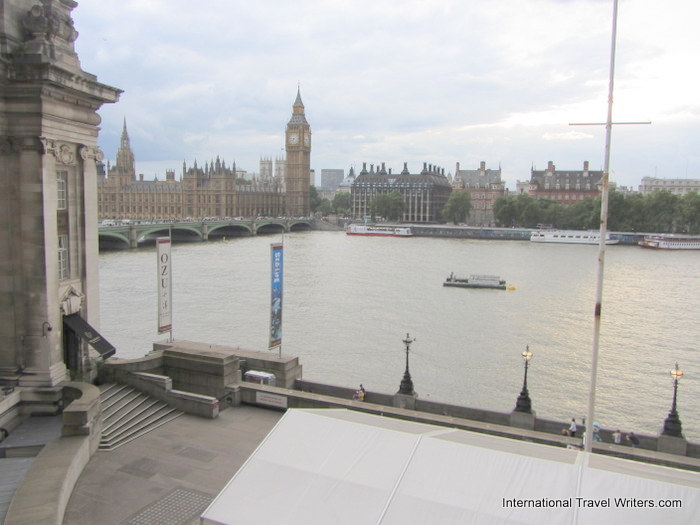 Looking downward we could see the outside entrance to Gillrays Steakhouse as well as the hotel's patio.  There was still a tent set up for a function that had been held during weather that was less than ideal. 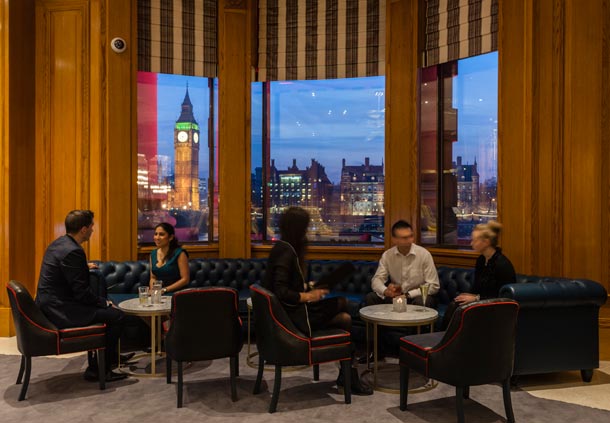 Gillrays Steakhouse & Bar is located inside the Marriott County Hall.  It is named after James Gillray, a famed caricaturist of the late eighteenth century, who was born in Chelsea in 1756.  His work punctuates the menu and a selection is exhibited on the walls of the restaurant.  The bar featured a couple of live music events during the month of August. 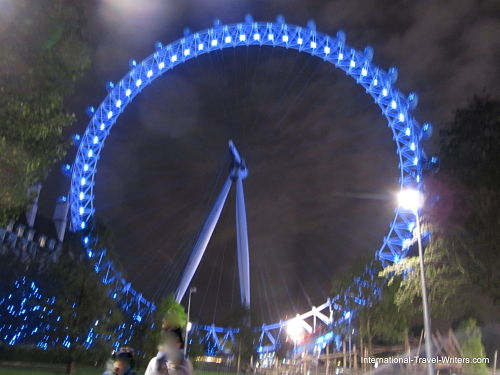 The London Eye at night seemed like the ultimate fusion of modern day technology with a noted historical landmark site.  A gorgeous sight to behold as we ended our day with a walk in the park.

Any future stays in London will be at the Marriott County Hall London.  It is situated strategically to take advantage of the surrounding London landmarks and activities such as the Sea Life Aquarium.  It also offers close proximity to Zen China, a high class Chinese restaurant inside County Hall (in case you tend to get a hankering for oriental food like we do), and Zen Cafe right near the wheel where you can people watch with your meal or snack.

If you want to work off calories consumed, Marriott County Hall has a gym and an indoor pool.  Plus they have relaxing treatments available in their spa...why stay anywhere else?