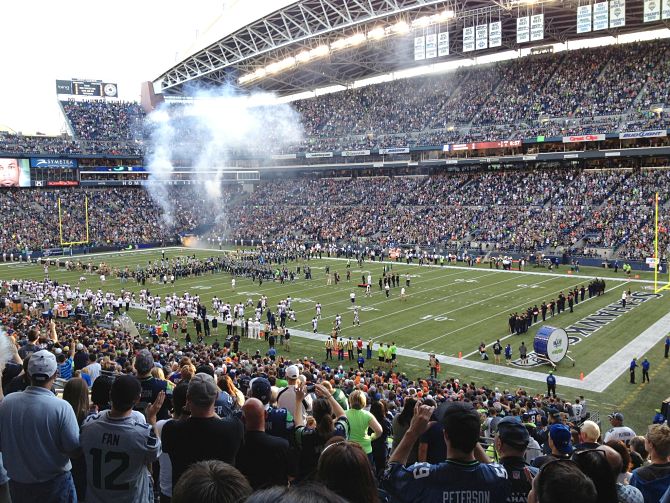 During a Seattle Seahawks game the atmosphere is both electrifying and zestfully intoxicating. Even the pre-season games, with the introduction of players back onto the football field after a long break, transmit spine-tingling moments that are thrilling and dramatic.  Each year...the same question. Will this be our year?  This year of 2013, it was!

We've watched our team during our travels while in hotel rooms and airport lounges, or when no live feed was available, even followed the action on IPhones. Nonetheless, on this day of August 17th, we were at Century Link Field to see our team at home... take on the Denver Broncos. Although I'm a die-hard Seahawks fan, my quarterback of choice was always Peyton Manning. It was a little overwhelming to have both on the same field because no matter what a marvel it is to see Peyton play, our Seahawks must win. And, win they did.

Most of all, a new quarterback of choice materialized...Russell Wilson. We finally had a QB to hold our attention who actually belonged to us. We could now focus on this young, talented, athletic and bold rookie starting his second year who played like he was invincible. 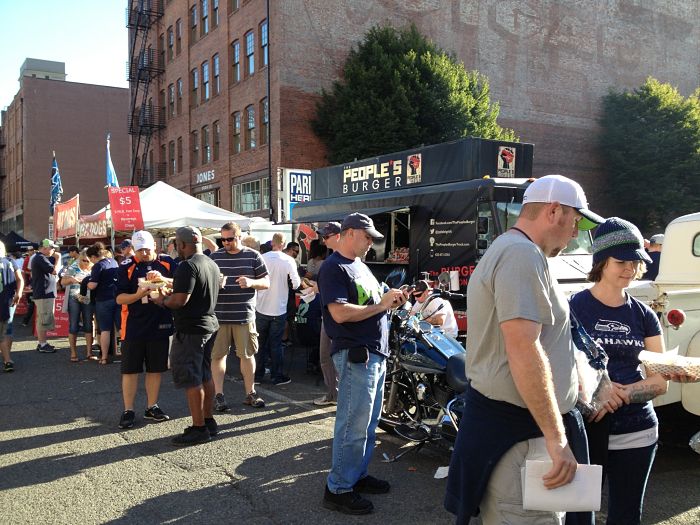 Festive and party-like, thousands of #12 fans arrive early and mingle. The pre-season is a little different because teams are "testing the waters", learning where they need improvements, plus who they will release when paring for the salary cap. But for #12 fans it's a celebration of another year to shine and maybe even bring back the coveted Lombardi Trophy after a hard fought season in which we all participate and let the whole world know by our thundering, boisterous and rip-roaring voices which will be hoarse the next day. 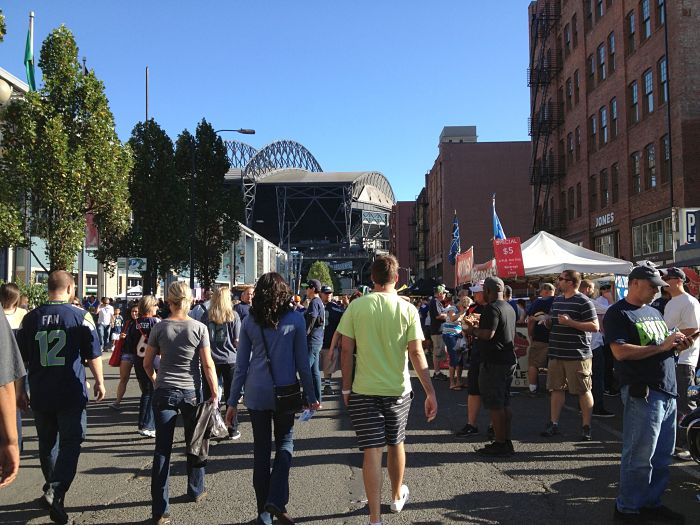 Vendors selling Seahawks NFL jerseys, hoodies, etc. abound. Kettlecorn, French fries, hotdogs, bratwurst, gyros, and hamburgers are stockpiled on mobile vans or quick set-up kiosks to capture the attention of fans prior to entering the gates of the stadium where sales are brisk as fans fill the stomach void. Inside the stadium prices are higher so not being overly hungry is a benefit as is the camaraderie with friends that have seats in sections far apart. Eat, Drink and be Merry...sums it up. 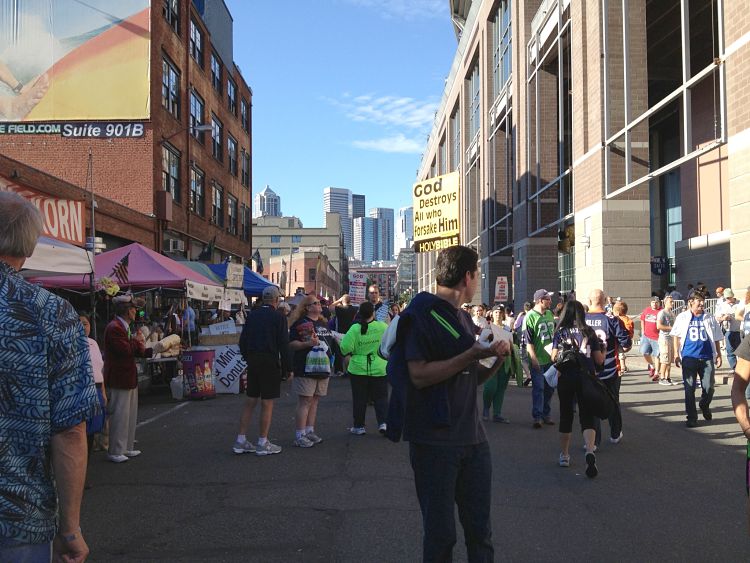 As game time approaches the crowds start to thin as the throngs head for the entry gates, grabbing a last snack or making plans to meet other fans afterwards.

The stadium noise starts out respectfully subdued for the opening ceremonies although it will ramp up considerably before the first play. We try to let the whole world know that we support our Seahawks team, win or lose, and cheer with unconcealed glee to let them know we have their back. The roster has numerous great players but Wilson, Lynch, Sherman, Tate, Bryant, Chancellor and Thomas come to mind quickly. 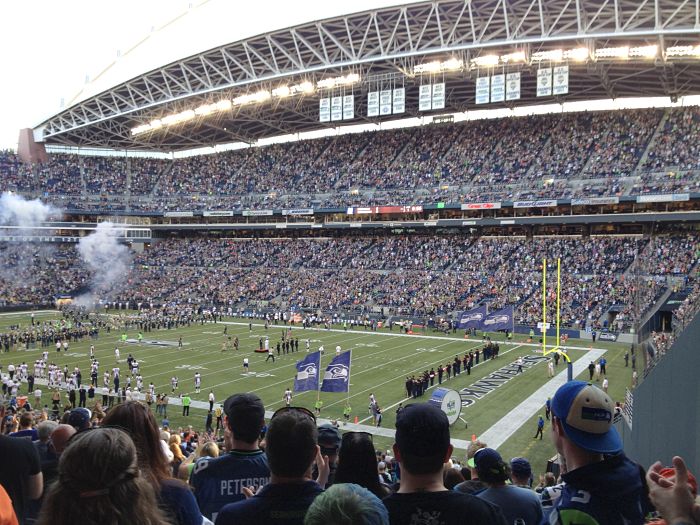 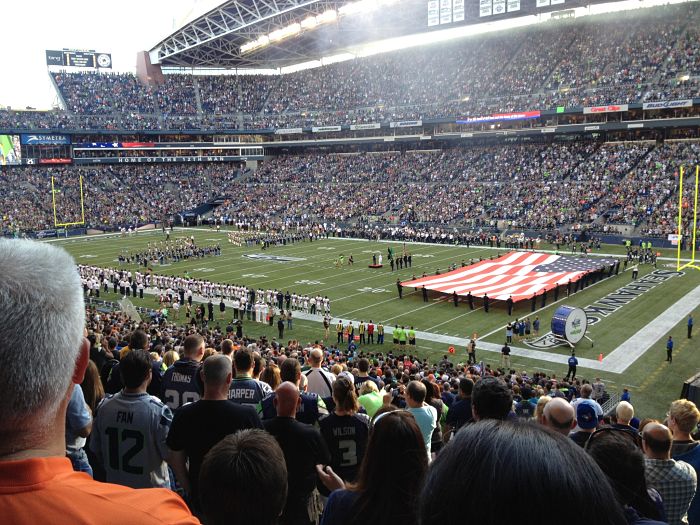 A man in front of us was wearing Bronco orange and he was plunked right in the midst of an undulating sea of 12'ers. He was a good sport but as the game score continued rising against the Broncos, he got quieter. 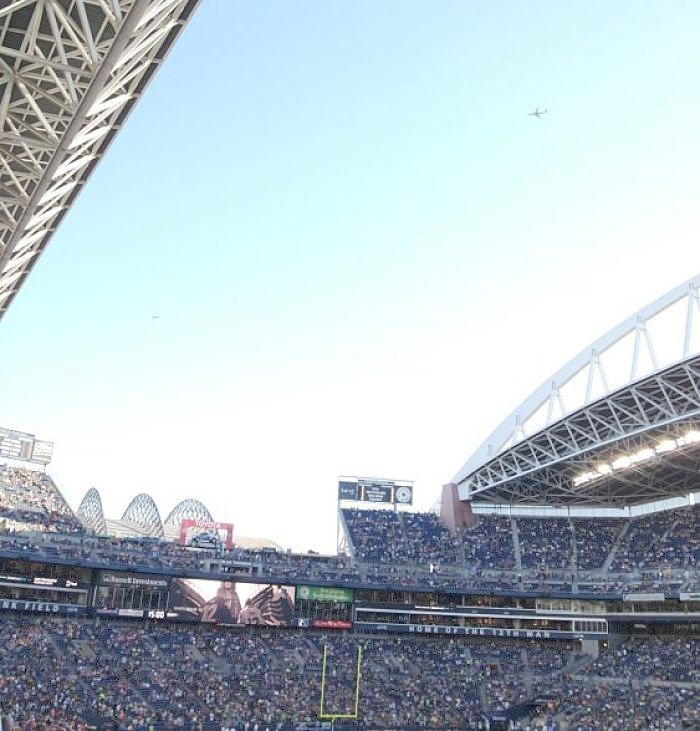 If you look closely you can see a Boeing aircraft flying over Century Link Stadium. An omen that we could get to the top? A suggestion that the sky's the limit? Superstitions aside, the Seattle Seahawks were showing us by their actions that pre-game or not, they were ready to take on anyone!

We did! This pre-season game on Aug. 17th was the first win over Denver topped off with a commanding repeat performance once more on Feb. 2nd's Super Bowl game. Broncos 8 - Seattle Seahawks 43.

No longer to be that "team in the North" sounding like we were in the Alaska tundra, no longer to be "nameless" in words of sportscasters who droned on about teams in the East, no longer to be left out when
NFL teams were lauded and we seemed to be "anonymous", no longer "unsung" winners stamped with "fluke game", "pedestrian", etc. Finally, some respect for a noble job, well done.

Pete Carroll had taken raw, rough-hewn mega talents, honing and molding them into a cohesive, significant unit that was hard to beat...and made us 12'ers almost burst with pride.

Finally the Seahawks have shown that being assertive, dominant and forceful aren't descriptions of other teams but of themselves. They brought home a gratifying and glorious first Super Bowl win in franchise history...and we 12'ers know...it certainly won't be the last!