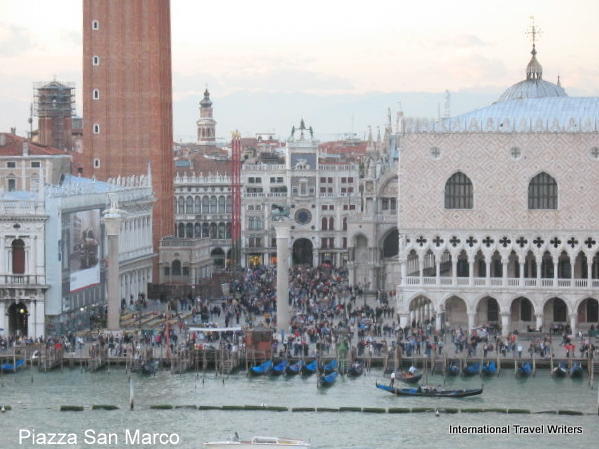 Piazza San Marco (St. Mark’s Square) was just as we had been told…full of tourists. However, if we wanted to be alone we'd have gone to an remote island, if we wanted to be someplace with less activity we'd have chosen a location with fewer attractions…so we opted to visit Venice in October when the pedestrians were sparser. The key word here is “pedestrian” because there are no cars, buses or motorcycles allowed. The only modes of transportation are water taxis, vaporettos (water buses) and on foot. 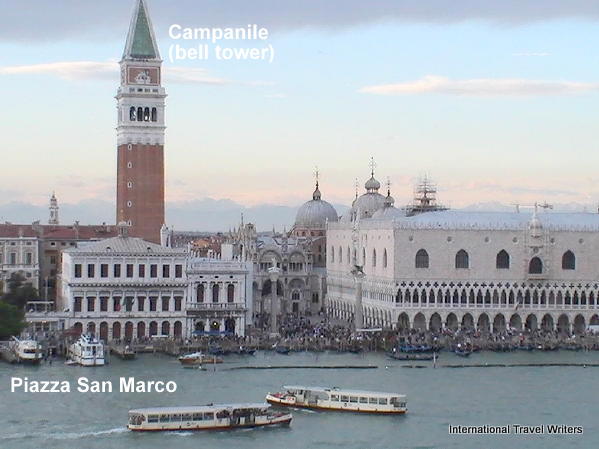 As we entered the Piazza San Marco, towering over the multitude (most with cameras in their hands), was the Campanile di San Marco (bell tower). It has a colorful history of being both a lighthouse and military watchtower that was constructed in the 10th century. The five bells alerted the populace of different activities such as the smallest bell being rung to announce the executions of prisoners who were suspended in cages halfway up the tower’s walls.

Later it was expanded, and later still it got a major renovation in the early 1500’s, then finally it collapsed in 1902. It was rebuilt and eventually was ready for prime time in 1912. Today you can buy a ticket and enter the Campanile which has an elevator that will take you to the viewing platform. 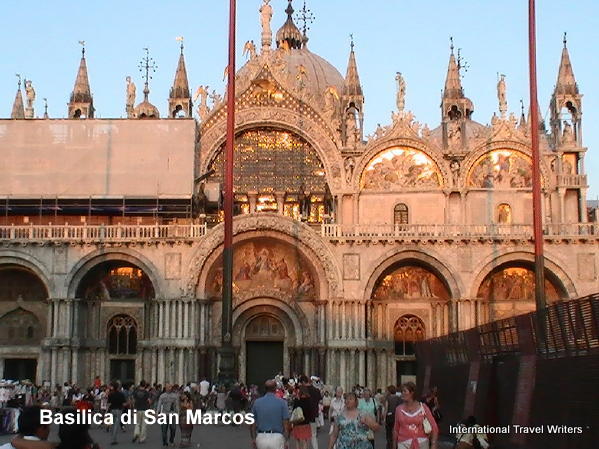 The Basilica di San Marco in Piazza San Marco is a huge cathedral famous for its Byzantine domes and gilded tiling and mosaics. The exterior of the building has changed a great deal over time because Venetian ships would return from the Orient with columns or friezes taken from some ancient site and add it to the church. The brickwork became covered with a variety of marbles and carvings, some much older than the church.

It was built to honor St. Mark after the saint’s bones were stolen from Alexandria, Egypt in the 9th century. Originally it was the chapel of the Doge and is connected to the Doge’s Palace. When it became the seat of the Patriarch of Venice in 1807, who was archbishop of the Roman Catholic Archdiocese of Venice, it became the city’s cathedral. 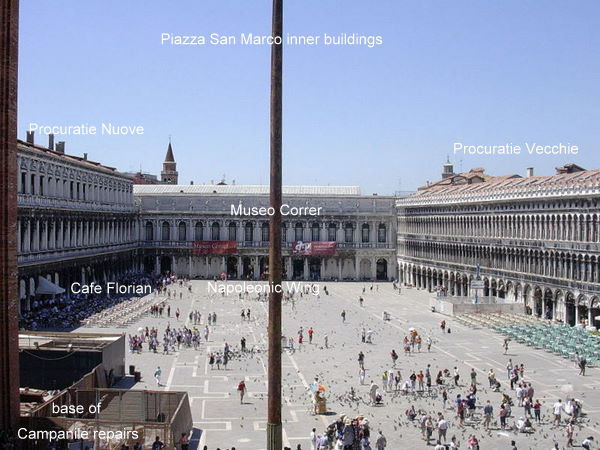 Libreria Sansoviniana houses the collection of the Marciana Library and the entrance to the Marciana is via the Museo Correr, at the far end of the Piazza San Marco. The Zecca (mint) and Loggetta (at the base of the campanile) is where the nobles gathered before meetings, especially if it was raining. Museo Correr occupies both the ballroom wing and the Procuratie Nuove…now serves as a museum.

The famous Caffe Florian is has a good vantage point to sit and people watch but be aware that coffee for two will set you back around $24. The same is true for the nearby Gran Caffe & Ristorante Quadri...thier hot chocolate is good but priced about the same as coffee. You can get reasonably priced pastries and snacks just steps away at the Marchini Time Pastry shop. For a non-touristy priced dinner there is Al Covo seafood restaurant where the food is suprisingly tasty and it is close also to Piazza San Marco. 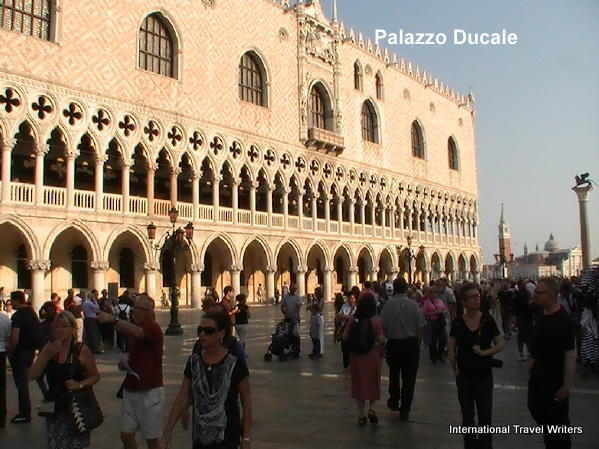 A dominant building in the Piazza San Marco is the Pallazzo Ducale (Doge’s Palace). It was the seat of Venice’s rulers for more than 6 centuries. The Palazzo’s main function was to provide a space for the government to carry out its civic responsibilities. The Palazzo Ducale combined the functions of our White House, Captitol, and Supreme Court.

Venice was a constitutional republic. The doge (duke) was elected to office by other nobles very much like the Pople is elected by the Cardinals. However, although the doge resided in the Palazzo he held no real power and was mainly a figurehead. The job came with an apartment in the palace. The Palazzo is preserved as a museum and there are tours with the hours posted outside. It connects to Prigioni Nuove (New Prisons) via the Bridge of Sighs. 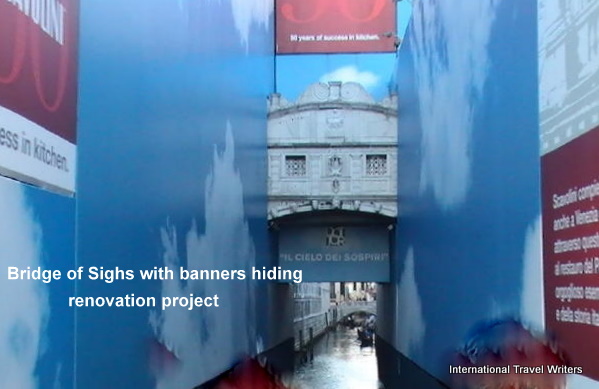 The passage existed from the 14th century to the 19th century without having a name. It was coined the romanticized name of the Bridge of Sighs by Lord Byron. He was referencing the walk from the court to the prison, suggesting the path through the passage offered a final view Venice, for those with lengthy or deadly sentences.