Walking in Rome Saturates your Senses 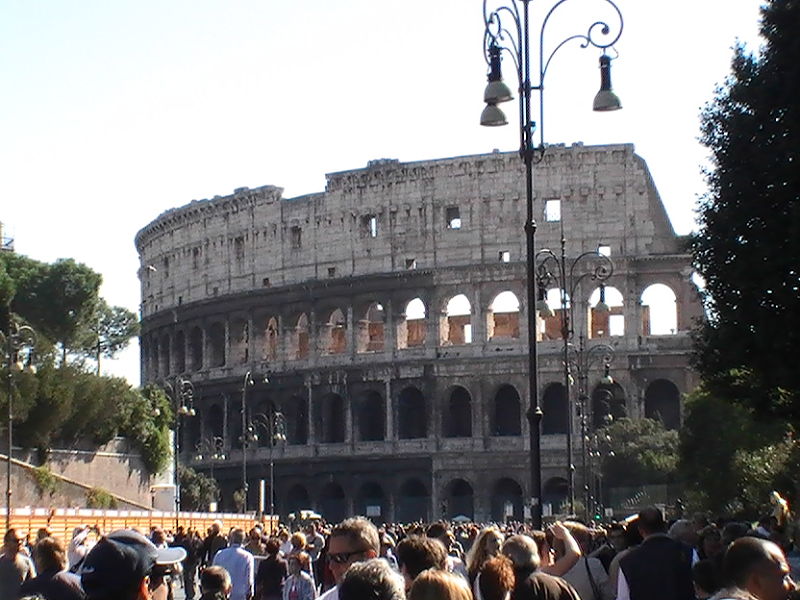 Walking in Rome saturates your senses with its magnificent but brutal history, especially when you realize the activities at the Colosseum in ancient times. The past evening we had meandered in an opposite direction taking in the Pantheon and the Trevi Fountain.

On this day we had reservations for a tour at the Colosseum and we allowed ample time to find photo opportunities along the way. We had also allowed extra time because of the rioting that had happened in the area the previous day. 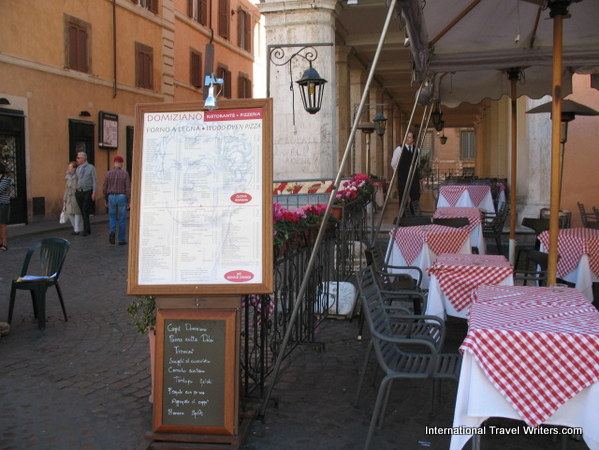 During our initial exit from the hotel we took a short cut from the hotel through a short street that cut into the Piazza Navona which we would traverse to get to the major road. There was a charming little restaurant (seen above) getting ready to start their day.

Walking in Rome with a map given to us by the hotel we located Corsa Del Rinascimento which is the street outside Piazza Navona. Within two blocks it leads you to Corso Vittorio Emanuele, the road which leads right to the Colosseum. 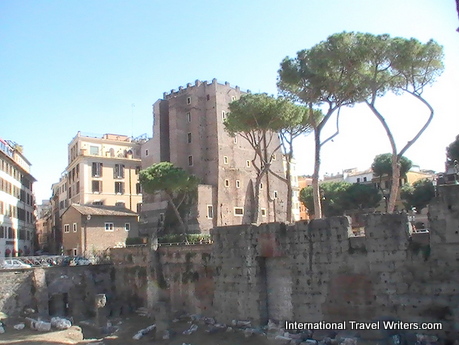 Within 10 minutes of reaching the main road we had come upon ruins that were still being excavated. It was Largo di Torre Argentina also known as Area Sacra. This was discovered by accident when they were going to expand the road and instead found parts of statues beneath the ground.

Since then they have uncovered numerous items and one of the important pieces of history is that the Pompey Theater was here. It was the Curia of Pompey’s Theater where Julius Caesar met his fateful end. Walking in Rome you see a curious mixture of really fascinating history. 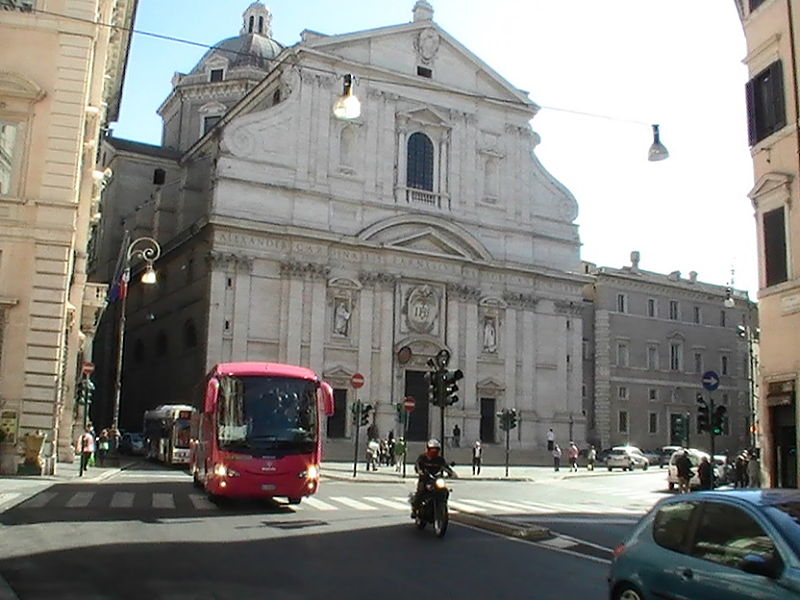 As we turned a corner and prepared to cross the very wide Corso Vittorio Emmanuel, we saw a baroque church. We asked several people what it was until finally an older lady, who spoke some English, was able to tell us that it was the mother church of the Jesuits.

We have since looked up some history of the church and discovered that it was first conceived in 1551 by Saint Ignatius of Loyola, the founder of the Jesuits Society of Jesus.

Construction was started in 1568. It went through changes over the years but the design of this church set a pattern for Jesuit churches that lasted into the twentieth century. It has some amazing frescoes on the ceilings and on numerous pillars.

There are also paintings by artists of the day. We continued walking in Rome just a few minutes more when we were stopped sharply by cyclists whizzing by. 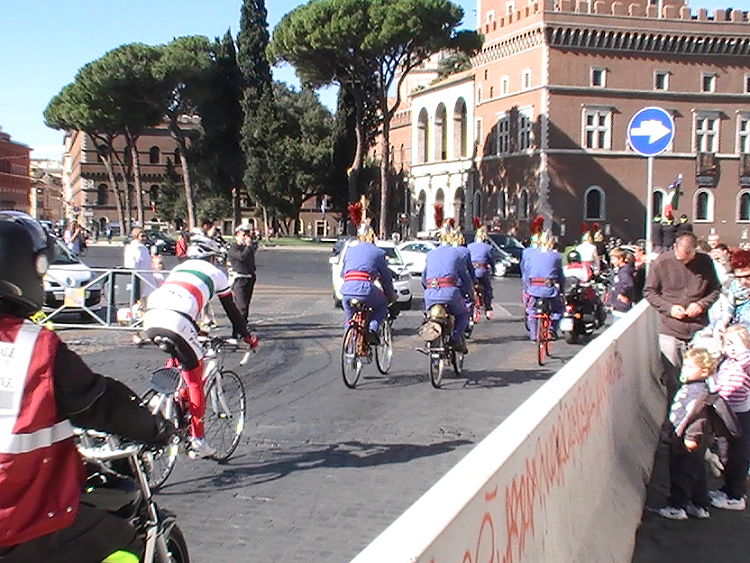 We were almost at the Piazza Venezia which has 3 major historical buildings when this event happened. It appeared that on this particular day a cyclist marathon of sorts was in full swing. The first of those 3 buildings, Palazzo Venezia, is partially seen on the right corner of the photo above. With the activity of the bikes it was difficult to get close.

Palazzo Venezia is an old building that dates back to the mid-1400’s. The palace was used a papal residence until Pope Pius IV allowed Venice to use it as their embassy. In 1916 it was acquired by the Italian government and Mussolini used it as his headquarters. It is now home to the Museo del Palazzo Venezia, a museum with historic arts, tapestry, paintings, armor, sculptures and ceramics. 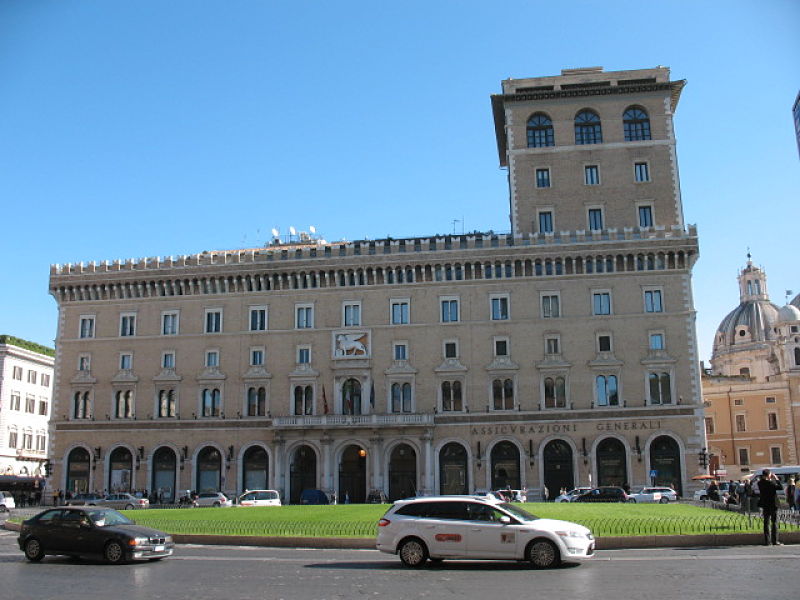 Across the street from Palazzo Venezia is the Palazzo delle Assicurazioni Generali (now an Insurance Company building) that was completed in 1911. It is a copy of the Palazzo Venezia including the elevated roof section. The third building in the Piazza Venezia is Palazzo Bonaparte. It was named after the mother of emperor Napoleon. She resided in this palace until she died in 1836. 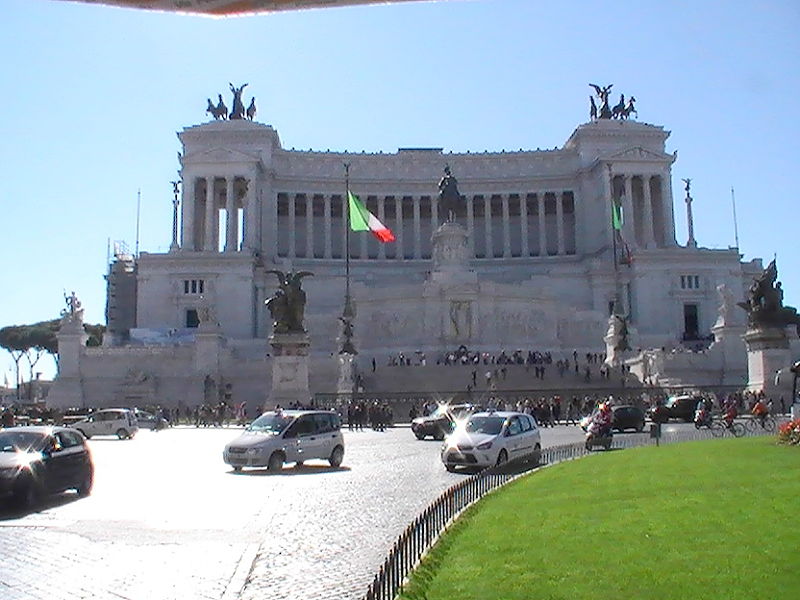 As we kept in walking in Rome, the Corso Vittorio Emanuele intersected with Via del Corso, then the name of the road changed to Via dei Fori Imperiali (Imperial Forums Road). We were now smack dab in the area of The National Monument to Vittorio Emanuele II, the first king of a unified Italy, it is also called Altare della Patria (alter of the Motherland).

It sits between the Piazza Venezia and the Capitoline Hill. Designed in 1885 and finally completed in 1935, it is built of white marble. It has Corinthian columns, fountains and stairways. an equestrian sculpture of Emanuele as well as two statues of the goddess Victoria riding on quadrigas. 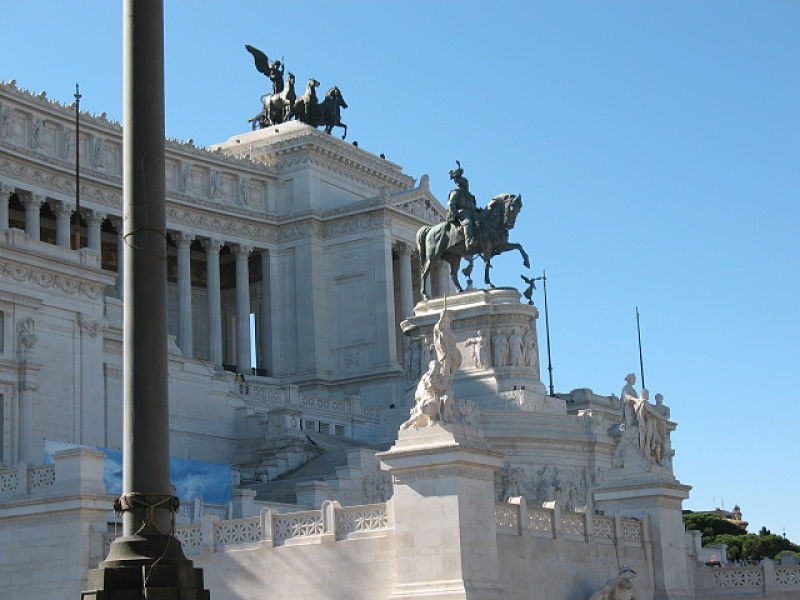 It is huge, measuring 443 feet wide and 230 feet high and that’s not counting the winged statues on top which take it to a towering 266 feet. There is a panoramic elevator (added in 2007) to the Terrazza Vittorano on the upper level where you can get a wonderful view of the area plus a close-up view of the statues.

This monument holds the Tomb of the Unknown Soldier (since World War 1) with an eternal flame. The base also contains the museum of Italian Reunification. This massive monument can be seen from many areas in Rome. Walking in Rome can be a discovery of small hidden areas or huge "hit you in the face" places like this. 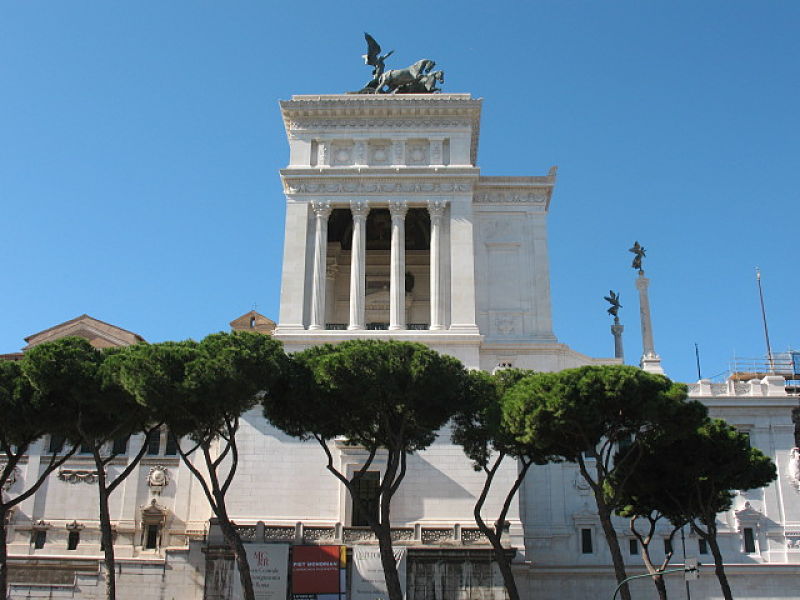 Although there was a lot of controversy regarding the building of this immense monument because it was displacing ancient historical finds, it is an impressive work of art. Commonly referred to as "a wedding cake" by tourists because of the tier design, the goddess Victoria riding on quadrigas can be seen from many areas of Rome. 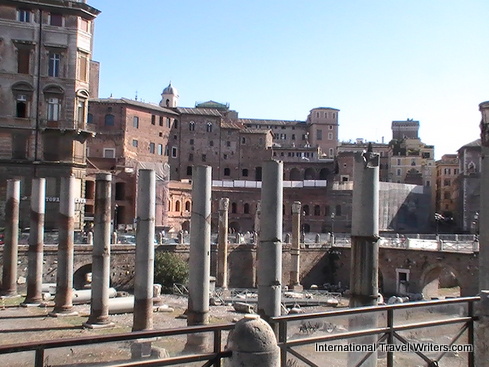 Just past Trajan’s Column is the first forum which is Trajan’s Forum. We thought that the Roman Forums were all one Forum with historical temples and ruins being unearthed to add to the grandeur of the huge area.

We were surprised to discover that the forums are actually Imperial Forums consisting of Trajan’s Forum, Augustus’s Forum, Caesar’s Forum, Nerva’s Forum and the Roman Forum. These Forums will be covered separately on the an Imperial Forums page that isn't completed. 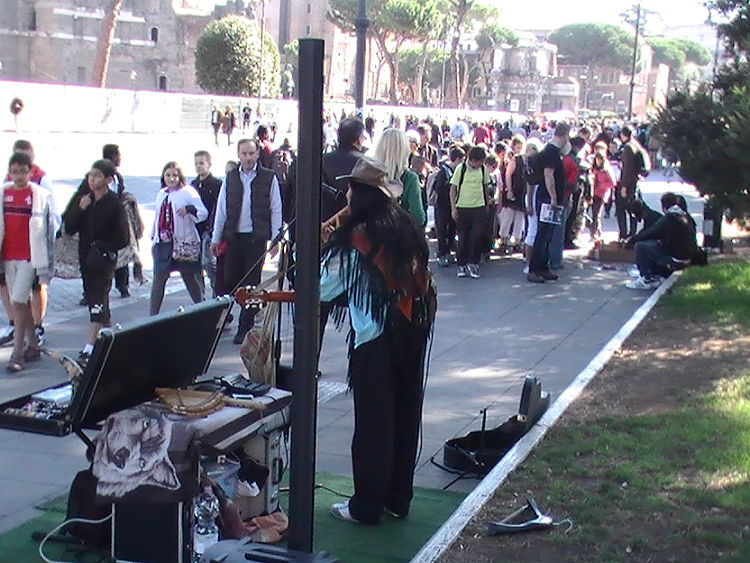 As I’ve mentioned, walking in Rome has a festive feel to it. Entertainers such as a group of Indians (looked and sounded like they were from the USA) were playing and selling their CD’s. 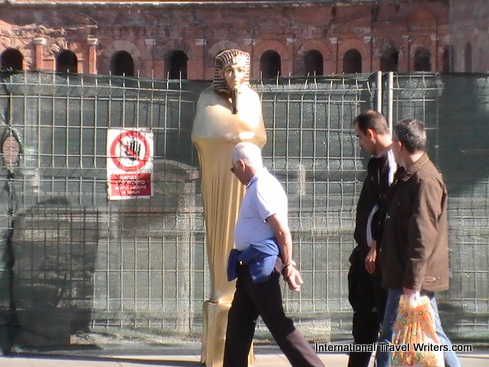 Mimes were dressed and ready for photographs and stood along the path to the Colosseum. A lot of the excavation areas were behind transparent fences to protect newly discovered artifacts from damage. 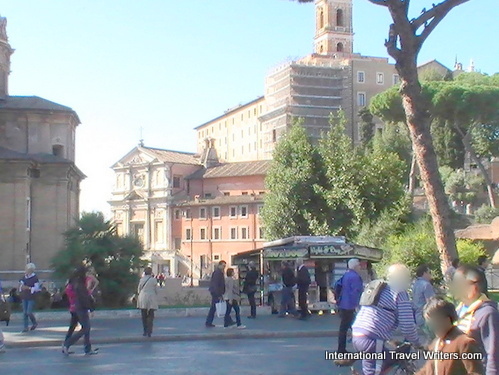 There were small ice cream kiosks available periodically. Business was brisk with the masses of people that were circulating in the historical areas. 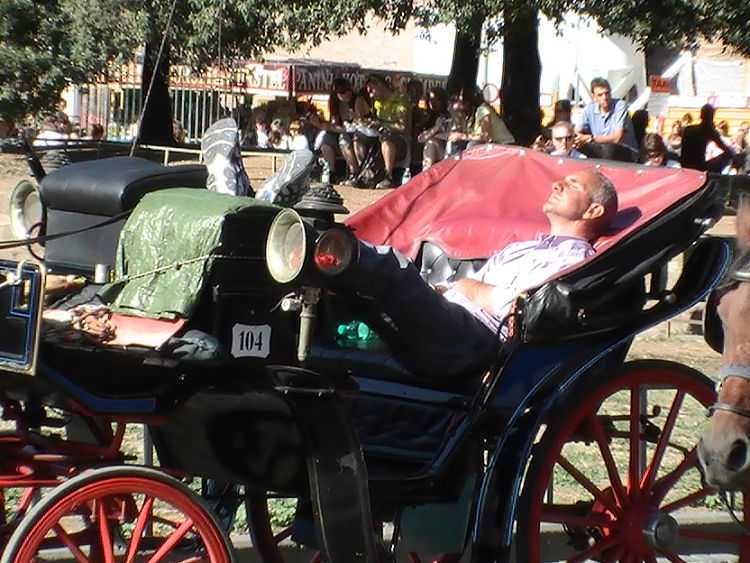 For those that find walking in Rome a bit tiring there are horses with a buggy for hire. Drivers nap until someone approaches and says something. I assume they make a good living at it because they weren’t actively seeking business 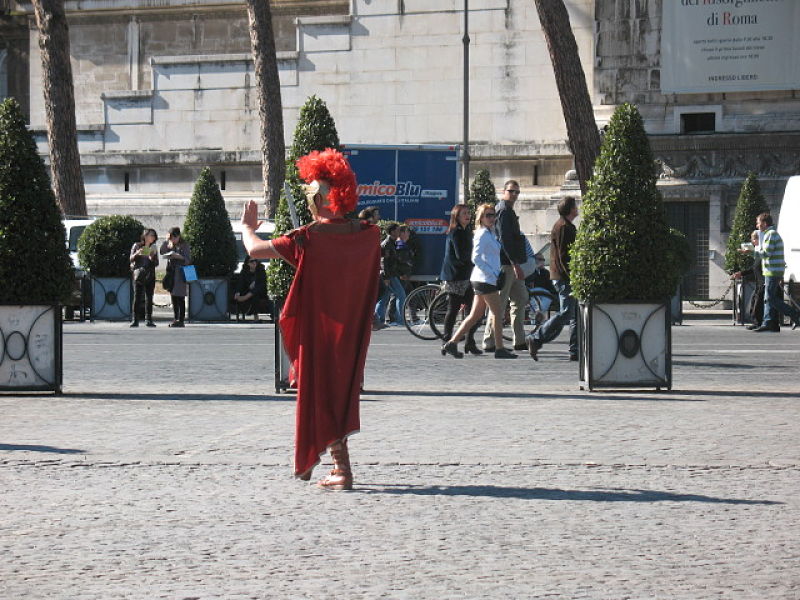 Not only mimes were available for photographs but there were also those in various Roman costumes. Some were centurions and we didn’t know what the others were. 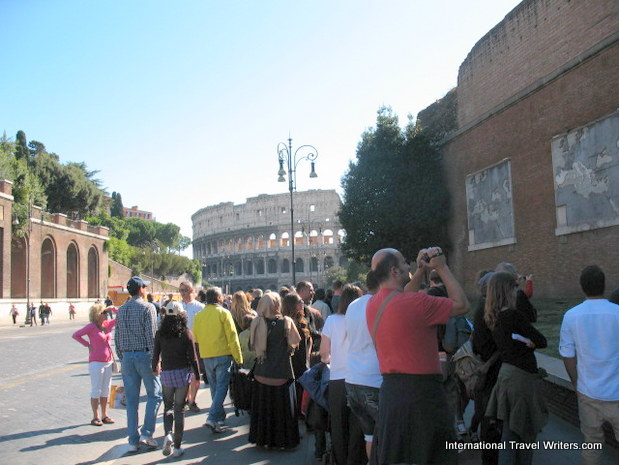 Along a wall as we neared the Colosseum were ancient maps that were surprisingly accurate considering that they couldn’t do aerial views. So, walking in Rome is extremely educational. We stopped to take photos of the maps as did numerous other tourists.

We could see the Colosseum up ahead and we still had time to spare which was lucky because it was like a madhouse in the ticketing area.

Thank heavens we had our hotel take care of that. However, walking in Rome you can become caught up in the relics of the past and lost track of time easily unless you have an appointment. It is as if there are so many historical objects permeating your thoughts, that current time ceases to exist, at least momentarily. 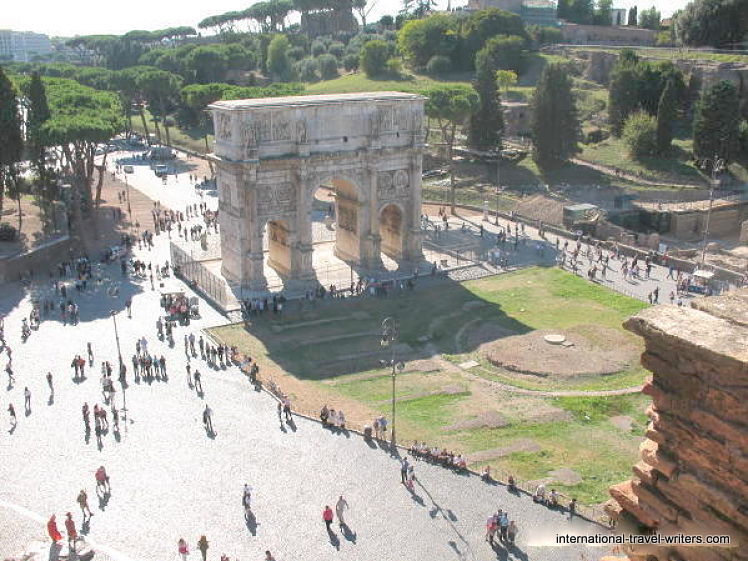 As we neared our final destination we saw the Arch of Constantine on our right. There were mobs of people passing through it to continue seeing other areas of Palatine Hill. It is situated between the Colosseum and Palatine Hill.

It was built to celebrate Constantine’s victory over Maxentius in 312 AD. The arch spans the Via Triumphalis, the way taken by the emperors when they entered the city in triumph.

Interestingly, it is decorated with parts of older monuments like those of Trajan, Hadrian and Marcus Aurelius. We took a photo but the better photo was taken from an upper level once we were inside the Colosseum. 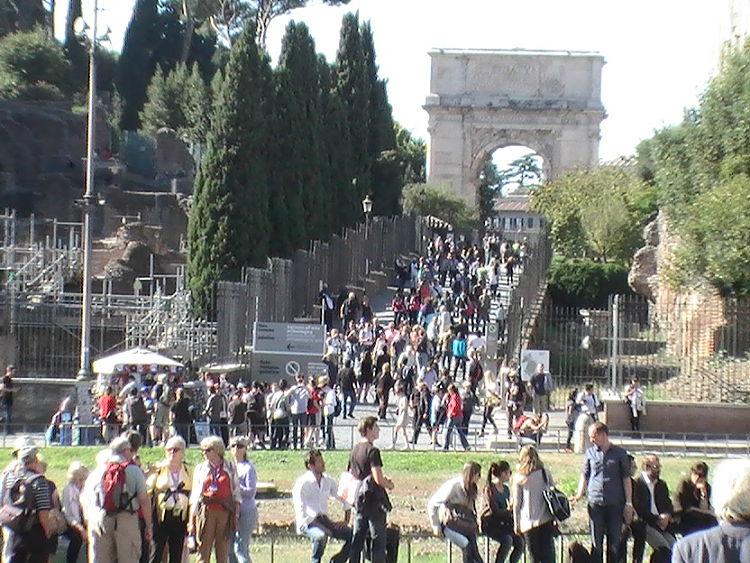 The arch of Titus is a 1st century arch constructed in 82 AD by Emperor Domitian not long after the death of his brother Titus. It celebrates victories of Titus. It is on the Via Sacra built on a prominent piece of land between the Palatine and Esquiline Hills near the Roman Forum and is visible from the Colosseum. 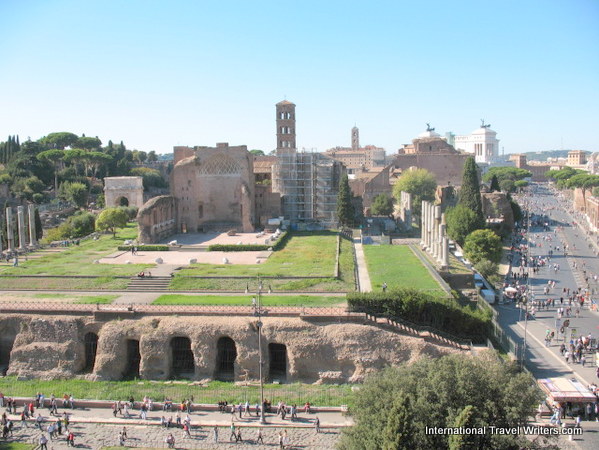 From the upper level of the Colosseum we were able to take a photo of part of the area we’d covered walking in Rome. On the left was the Arch of Titus, in the center is the Temple of Venus & Rome and in the background you can see the Monument of Vittorio Emanuele II rising above everything else. On the right side of the photo, not visible, are the Imperial Forums. 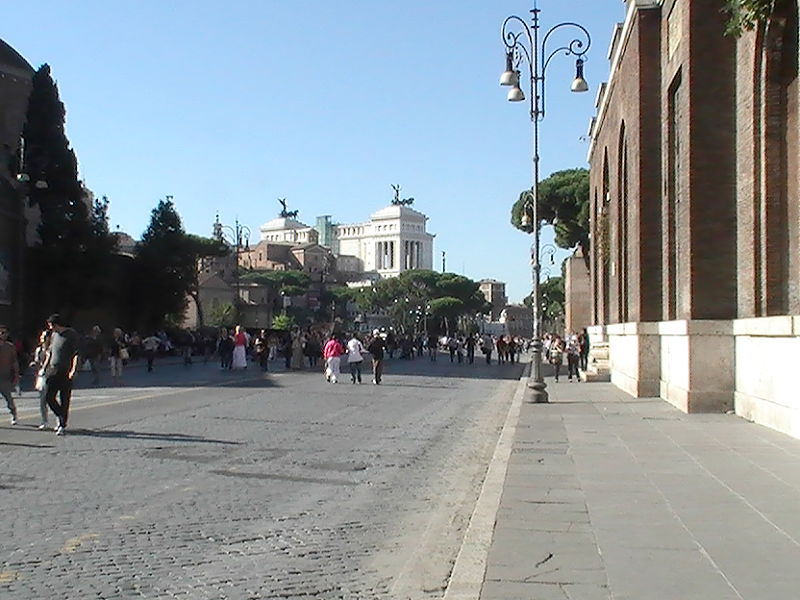 Walking in Rome was pretty easy because we took a leisurely pace. I'm not good at walking since I got older and typically taking a taxi is my preference. However, with so much history staring me in the face, I had to see how long I could last.

We didn't hurry, stopped to view sights along the way, and of course had our tour of the Colosseum. We surely put on some mileage but other than taking a short 2-3 minute rest several times it worked out well.

I'd do it again in a heartbeat. And, we now had the chance because we opted to walk back to the hotel and if I tired we could hail a taxi. We did make it back to the hotel on foot. I would guess-timate that the time was approximately an hour each way at a slow pace.

Although I welcomed soaking in a hot tub at the hotel before dinner (to rejuvenate those old muscles)it was a wonderful day full of amazing sights. Tomorrow we were scheduled for the Vatican but we were being picked up by the tour guide and wouldn't be walking in Rome this time...nice touch.

Return from Walking in Rome to International Travel Writers Homepage