Fire up your imagination with Knights and Mdina-Malta ...medieval walled city

Mdina-Malta was the small, walled, medieval capital of Malta. The current capital, Valletta, located on the peninsula, is dealt with on another page but Mdina was the ancient capital. The region is located on one of the island’s highest points and at a maximum distance from the sea.

It had been where the Roman Governor built his palace when the area was under Roman rule. Over the centuries, other noble families also built palaces there.

When Malta passed to the Knights in 1530 AD, Mdina was pretty much a safe place for the nobility while the Knights of Malta fought off intruders miles away in either Birgu or Valletta. It is believed that it was first fortified by the Phoenicians in around 1000 BC but that they didn’t wall it in. It appears that this task was undertaken by the Saracens much later, in 870 AD.

After the Norman conquest of Malta in 1091 AD, the Normans added to the defensive fortifications and widened the moat but most of the present architecture and palatial styles reflect the hundred years prior to the Normans. Today, most of Mdina’s palaces serve as private homes.

Not just Mdina, but the whole island of Malta, fire up the imagination. Malta was not only a strategically located plot of land but it became a pivotal site and refuge during some very grim moments in history. Malta stands on an underwater ridge that extends from North Africa to Sicily. At some time in the distant past Malta was submerged, as shown by marine fossils embedded in rock in the highest points of Malta.

As the ridge was pushed up and the straits of Gibraltar’s tectonic plates closed, the sea level was lower, and Malta was on a bridge of dry land that extended between the two continents, surrounded by large lakes. Some caverns in Malta have revealed bones of elephants and hippopotami, and other large animals now found in Africa, while others have revealed animals native to Europe.

Cars are not allowed with the exception of vehicles for weddings and special occasions so it has the nickname of “the Silent City”. There is parking available within the city itself and a back road that runs actually up the side of the ramparts and in through a tunnel under the walls.

There are classic entries to this petite town of Mdina-Malta. Motor coaches stop outside and once on foot you cross a bridge over a moat and pass through a monumental arch, the Mdina Gate, which has strong but also intricate stonework.

The widest point in Mdina-Malta is only 825 feet wide. Streets are narrow and they were constructed that way for a specific reason...defence. The streets are laid out almost in mazes to confuse enemies. However, these narrow streets also have beautifully crafted houses which are actually former palaces.

Many are still occupied by noble families, some with generations that go back 5 or 6 centuries. Their impressive houses and palaces line very narrow streets. You can have a leisurely stroll through these alleyways lined with stately Norman and Baroque architecture.

The pride of Mdina-Malta is the magnificent St. Paul’s Cathedral with its twin bell towers and dome that gives it a very stately presence. St. Paul’s has dual clocks similar to those in Valletta-Malta but they differed in location. The clocks in Valletta were on the same side of the church while St. Paul's Catheral in Mdina-Malta had one on the left side and the other on the right side. You will see this in the photos.

The Palazzo Santa Sophia is the oldest building in Mdina and opposite that is the church of St. Rogue. They have a Museum of Roman Antiquities to browse in. There is the Mdina Dungeons that offer waxwork displays in the original medieval dungeon chambers. As we meandered the narrow sidestreets we browsed in various merchant's windows and gazed upon a repertoire of varied offerings.

A shop that was truly done with a whiff of sophistication was the Maltese Falcon, no doubt flamboyantly named after the film and book of the same title. It boasted extravagant jewelry choices along with other gift items. We were tempted to purchase something just to have the purple bag with the boldly imprinted shop name, but decided not to.

It was getting to be dusk and the weather had changed, becoming cold and windy which happens frequently on an island such as this in the middle of the Mediterranean. We ended up heading for the Fontanella Café and Tea Gardens for hot coffee (some actually had ice cream) before leaving this enchanting, if somewhat miniscule, medieval city that had a mystic quality. Mdina-Malta is definitely another location to be placed on our "Cities to Return to" list. 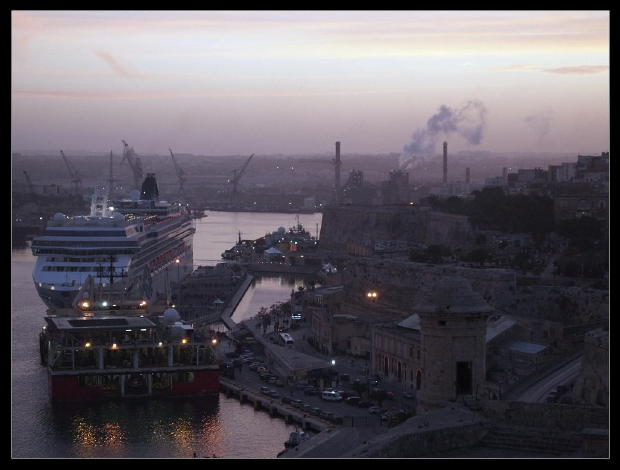 When we got to the Valletta Wharf where we were docked it was getting dark. We noticed that other ships had already left and the Norwegian Jade, once she departed, would leave the dock barren until the next cruise ships arrived.

The next morning we would be in Eupheus (Izmir), Turkey and there would be other ruins of weathered and ancient limestone with secrets of the past waiting to be seen by new sets of wide-eyed spectators.