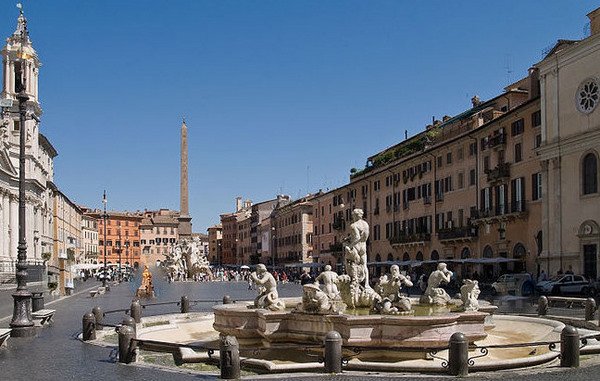 Piazza Navona had grand beginnings in 86 AD. It was conceived and built as a stadium by Domitian (Vespasian’s son and brother of Titus) who expanded the Colosseum by building both the hypgeum (underground) and adding the fourth floor. Games were involved here also, but not the bloody spectacles of the Colosseum. Domitian’s Stadium had a larger arena than that of the Colosseum. Chariot races, similar to those at Circus Maximus, were held utilizing its oval design.

As a matter of fact the stadium was originally known as Circus Agonalis. The square was sometimes flooded in the summer and used for aquatic games and staged naval battles. In the 15th century, over the ruins of the then decrepit stadium, it was paved over to create Piazza Navona. 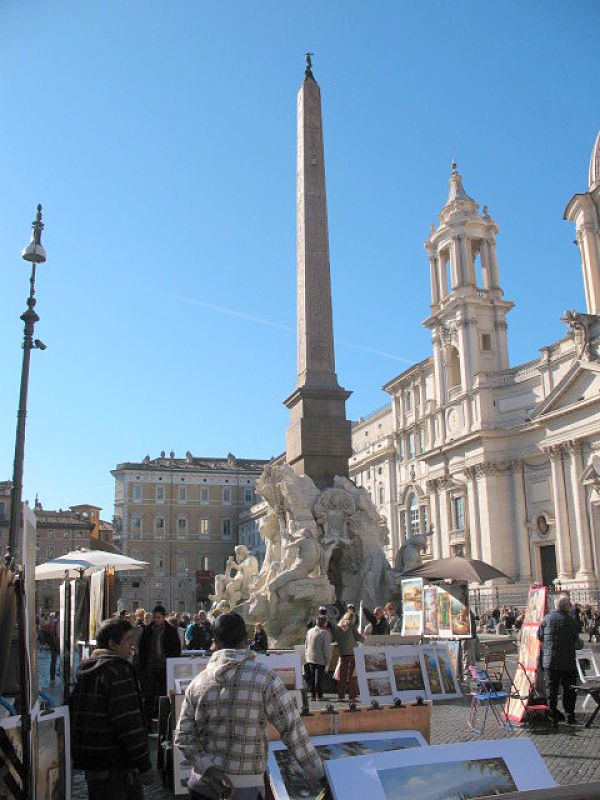 This modern piazza is situated just west of the Pantheon…an easy walk. It boasts 3 magnificent and classic fountains. The most famous of them is the Four Rivers Fountain (Fontana Dei Quattro Fiumi) which is an extremely complex work of art by Bernini. He sculpted 4 nude figures surrounded by symbols indigenous to each area. 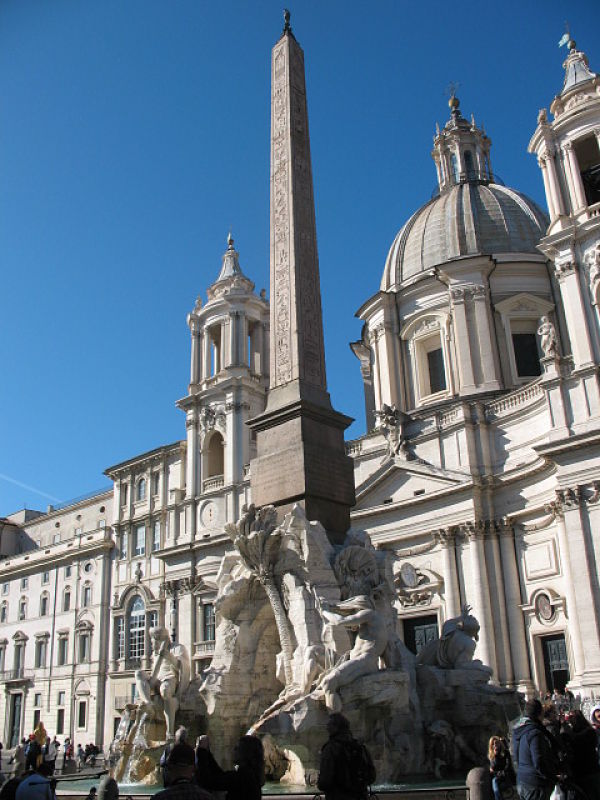 Since the Amazon River was unknown at that time the four rivers represented were the Rio de la Plata, Danube, Ganges and the Nile. Towering over the fountain and anchored in its center is the 70 foot tall Egyptian Obelisk that was originally in the Circus Maximus. The fountain was inaugurated in 1651. 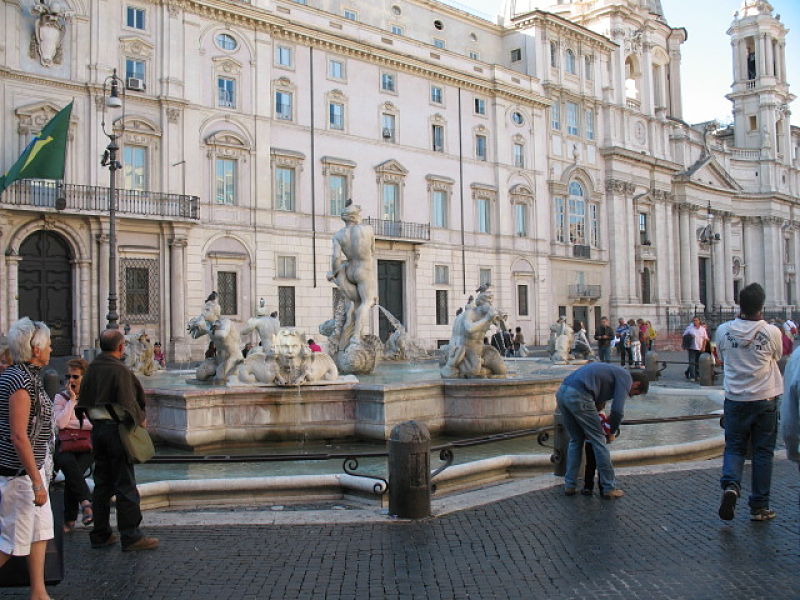 Standing proudly, facing the Fontana Dei Fiumi, is the Sant’Angese in Agone Church. This photo was taken from behind the Neptune Fountain to give a different perspective than the one above. The church was designed by Borromini (a rival of Bernini) who added a statue of St. Agnes to the façade gazing out beyond the square. The baroque church, although it was started just two years after the fountain’s completion, was completed in 1670. It is a remarkable example of Baroque architecture. 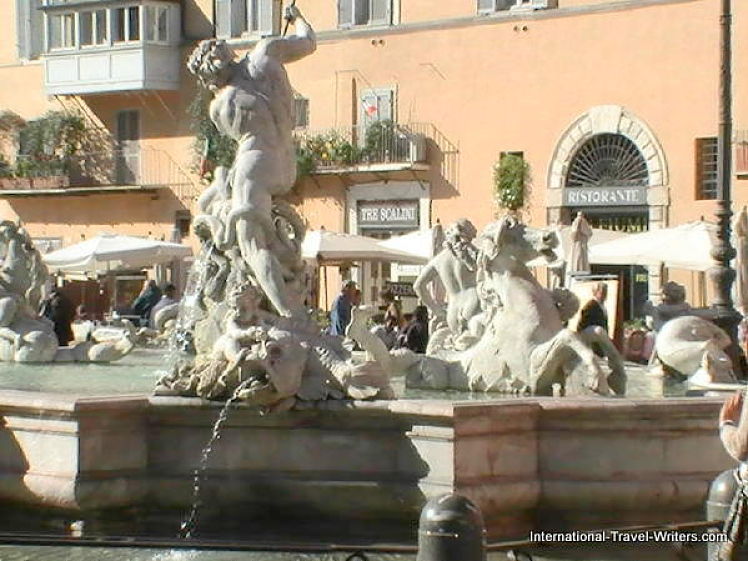 At the north end of Piazza Navona is the Neptune Fountain (Fontana de Nettuno. It is also known as the Calderari and was built in 1576 by Giacomo della Porta. The statues of sea nymphs surrounding Neptune were added in the 19th century. 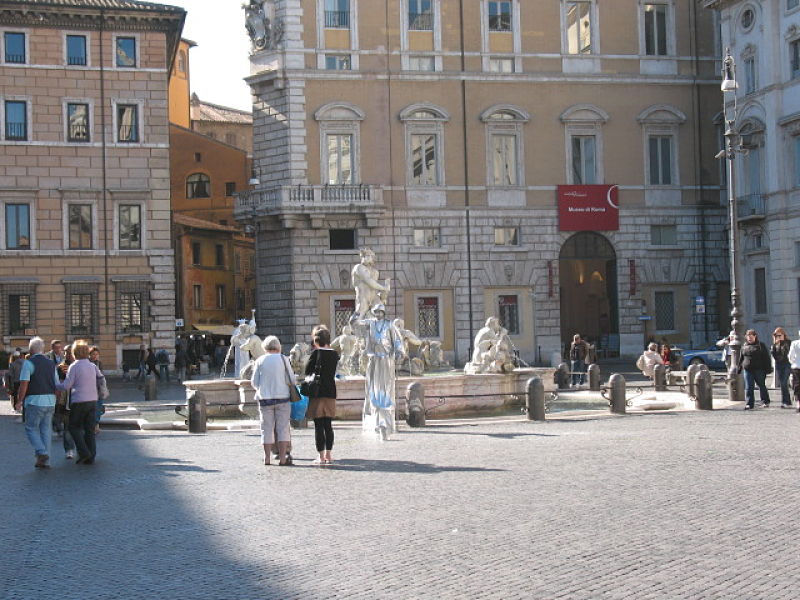 Moor Fountain (Fontana del Moro) is located at the southern end of the piazza. This was also built by Giacomo della Porta but the central statue of a Moor holding a dolphin (designed by Bernini) was added in the 17th century and the 4 Tritons were added in the 19th century. The fountain basin is made of a special antique rose marble. In 1874 the original sculptures were moved to the Villa Borghese during a restoration but the substitute copies are still on the fountain. 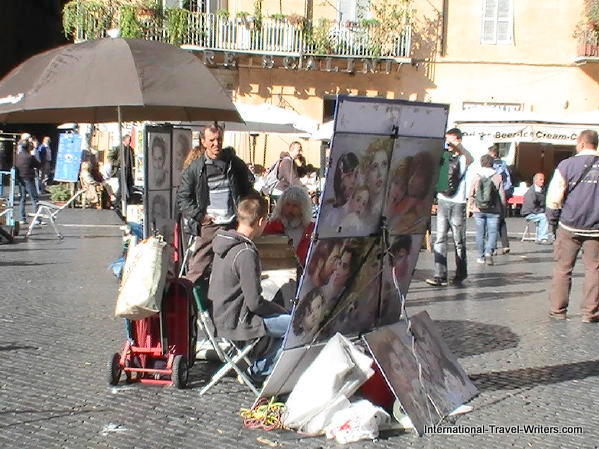 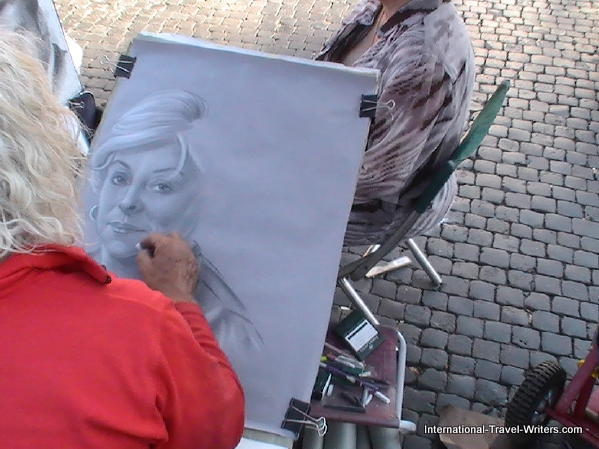 The Piazza Navona was pretty much like we remembered it when we had our brief visit in 2009. Lively, active, artists gathered to both paint and sell paintings, vendors selling souvenirs, and of course…the mimes. Around one of the fountains was a treasure trove of art. Although it is busy, it’s still quaint and it feels like you have your finger on the pulse of Rome.

The faces in the crowds are a mix of young and old as well as mostly foreign tourists in the middle of the day. Early mornings and later in the evening is when you will see more of the locals blending with the tourists. Joining in the activities we decided to get an artist to sketch us. 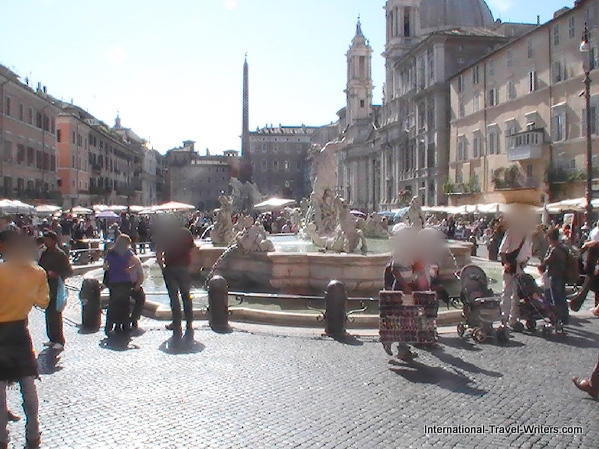 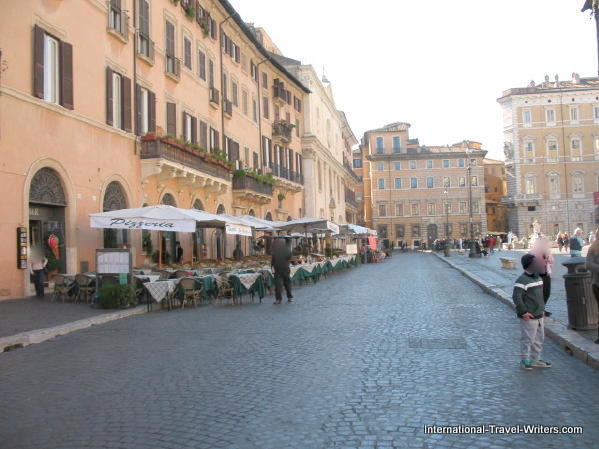 People watching is a great pastime. There are a variety of outdoor cafes and sitting at a table sipping espresso or wine while taking in the scene can be a little pricey…so splurge and consider it great outdoor entertainment.

We ate lunch one day at La Dolce Vita restaurant and had a pizza for lunch on a second afternoon at another cafe nearby. It had a poached egg in the middle…guess there’s a first time for everything. We had dinner one evening at another café that I can’t recall the name of. The food was very good but we tended to eat dinner at our hotel where the food is fabulous, Hotel Raphael.