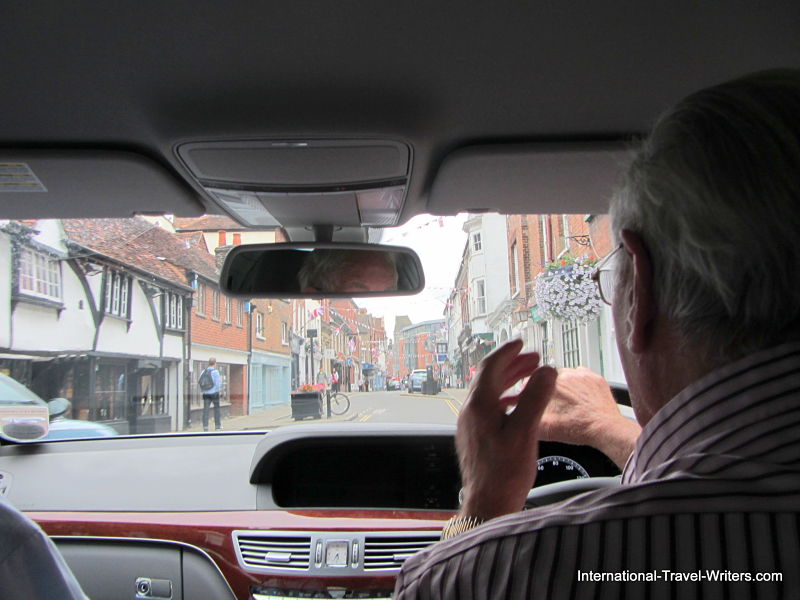 London...had it not been for the supreme effort of our two British friends to spread before us as much of this city as they possibly could (in the 36 hours we had available prior to continuing on to Barcelona), there's no way in hell we'd have seen even a fraction of the sites.  The result...we've been struck by "London fever" and can scarcely wait to return.

The photo above shows Jim giving us a history lesson as he and Yvonne bestow upon us this astonishing whirlwind tour to experience their majestic and renowned city.  We not only got to observe the highlights and legendary landmarks but then headed to time-honored  Cliveden for a superb lunch.

Some highlights are below - others follow on the London Landmarks page 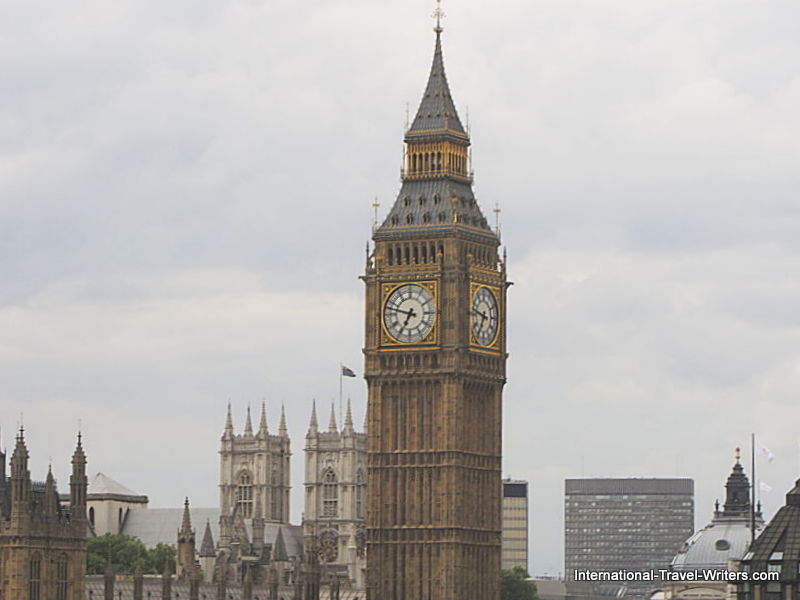 London celebrated!  After 13 years of construction, Big Ben first rang out announcing its resounding and reverberating presence on May 31st, 1859.  Big Ben is not the name of the tower structure that contains it, but the larger bell that has 4 smaller bells at its side.  It is 8 feet in diameter and weighs an incredible 13 1/2 tons.  It is embellished with the Royal arms and portcullis of Westminster. (UPDATE:  It has recently been renamed Elizabeth Tower) 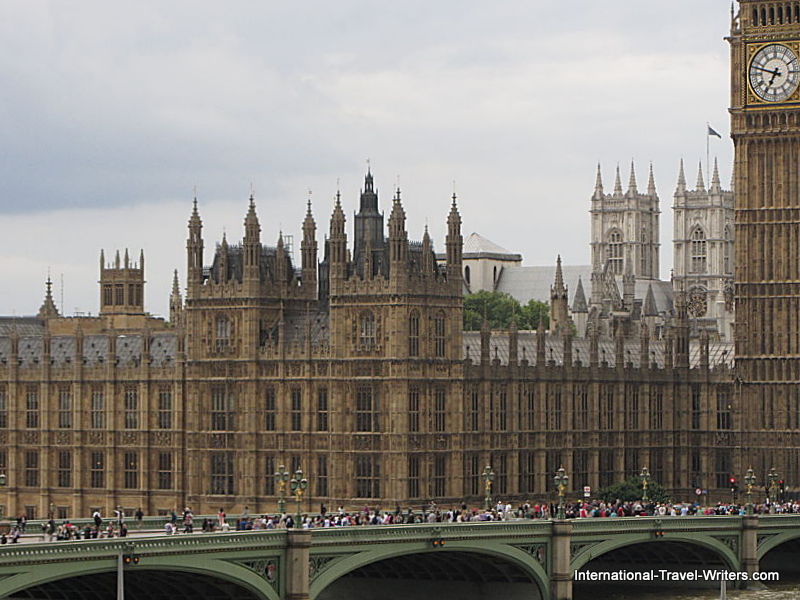 London is a great escape whereby you can abandon yourself to fantasies of the ancient days of yore.  Visions of Knights of the Round Table, valiant warriors protecting home and hearth, mighty steeds--also armored, swirl inside your head as you gaze at the magnificent architecture.  Imagination can run rampant...when you delete the vehicle traffic from your vision. 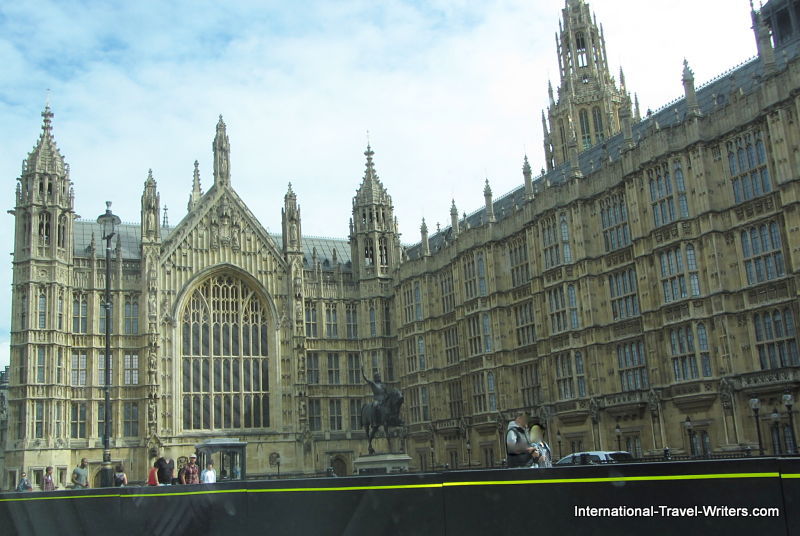 The Houses of Parliament (Palace of Westminster) has had the same placement since Canute the Great built the palace in 1016.  After a fire in 1529, King Henry VII moved to St. James Palace and turned the building over to the politicians. Most of what you see today is rebuilt after another fire that devastated the buildings in 1834.

It was split into two sections...the House of Lords which has the non-elected nobles and wealthy landowners and the House of Commons which has the commoners.  This is where the Prime Minister comes face to face with members of the opposition.   Unbelievably, to this day, the Queen is forbidden to enter the House of Commons.   The last monarch to gain entry was Charles I in 1642, but then Cromwell ousted him...so I don't think it's high on a monarch's list of priorities anyway. 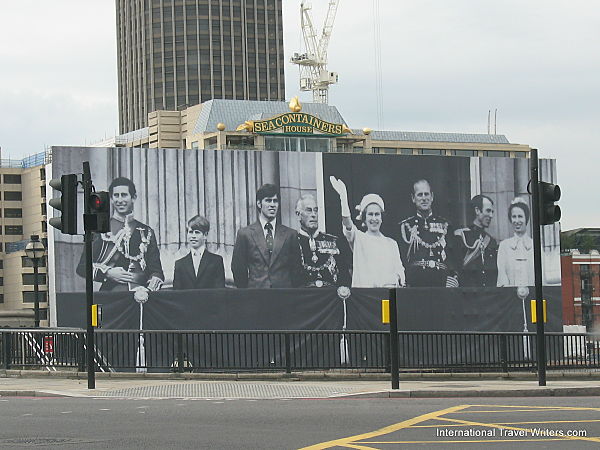 A royal welcome to London!  Utilizing a photo from the Queen's 1977 Silver Jubilee, a huge banner was crafted to hide the restructuring of the Sea Container House, a recreational area along the waterfront.  For a few years there have been revisions and re-planning but it is expected to be completed by the end of 2013.  Great idea as a greeting to 2013 Olympic attendees! 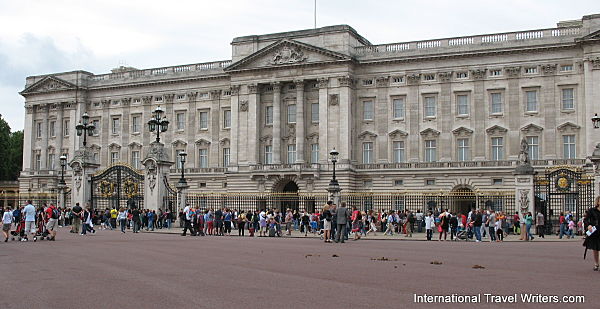 Buckingham Palace has a colorful past.  It was built by the 1st Duke of Buckingham in 1702.  It was meant to be a country mansion at the edge of St. James's Park but as frequently happens...the city grew out to surround it.  George III bought it and George IV took it upon himself to make it regal.

During World War II bombs rained down on King George VI and Queen Elizabeth (the current Queen's parents) who staunchly held their ground and wouldn't evacuate.  Fortunately, although there was damage, the palace withstood the brunt of it. 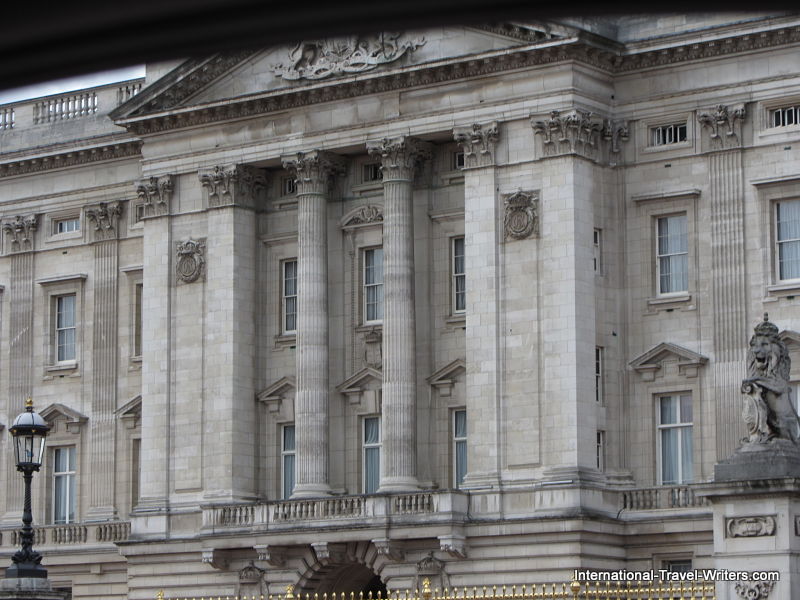 The large wing facing The Mall was added in the 1850's creating the balcony where the royals could wave at the crowds and in 1913 the front was replaced with Portland Stone in order to compliment the Queen Victoria Monument nearby. 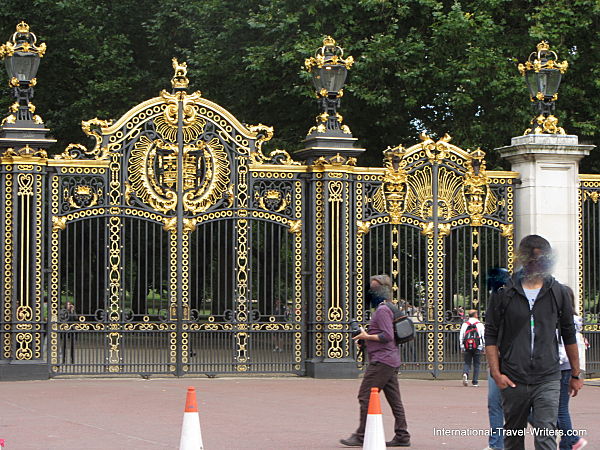 Above, you see the Canada Gate at the entrance to Green Park.  Canada has long had a close relationship with England.  As a Canadian, I grew up singing God Save the Queen at special functions and her photograph graced the wall of all schoolrooms in those days.  Today, much has changed but the bond with England and Canada is still intertwined through the travails of two world wars fought side by side, with my father amongst them. 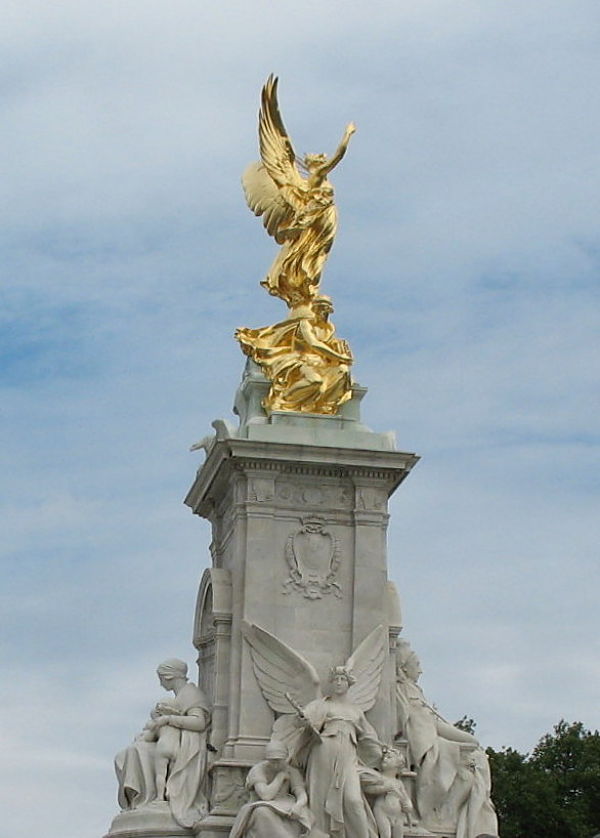 The Queen Victoria Memorial is an impressive 2300 tons of white marble that climbs to a height of 82 feet and celebrates her long reign from 1837 until her death in 1901. King George V unveiled it in 1911.

Crowning the top is a gilded statue of Victory with the two seated figures of Courage and Constancy.  The surrounding wall has reliefs of sea-related creatures and bronze sculptures. 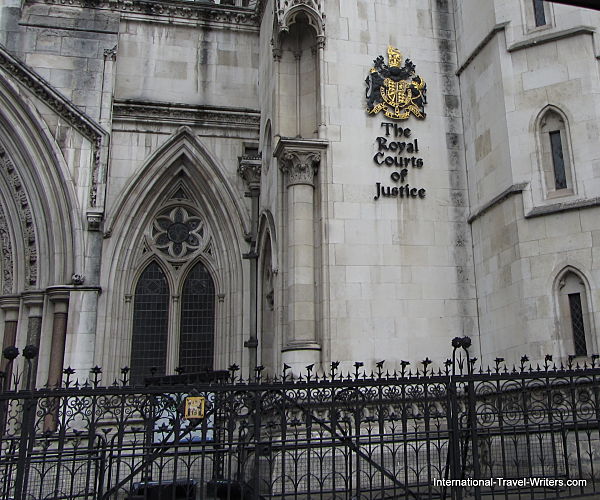 The Royal Courts of Justice were designed in the 1870's with a Gothic flavor that blends well in the Strand.  It has become one of the most distinctive buildings in London.  The Royal Courts are where the high-profile civil cases are fought.  It isn't unusual to see famous faces departing after a hard fought battle.  Rigorous security checks are done prior to entry.

The main entrance sports two ornate porches with iron gates and leads to a mammoth hall done in a cathedral style.  Soaring arches feature the coats of arms of Lord Chancellors and keepers of the Great Seal.  Above the outer porch are replications of heads of England's most prominent lawyers and judges of that era as well as Jesus, Moses and King Solomon.

It was expanded after about 30 years, adding the West Green Building, to house more divorce courts.  In 1968 the Queens Building was added for more courtrooms and cells were added in the basement.  In 1990, the Thomas More Building was added to house more bankruptcy courts.  There remains no more room for further expansions although occasionally larger areas get partitioned. 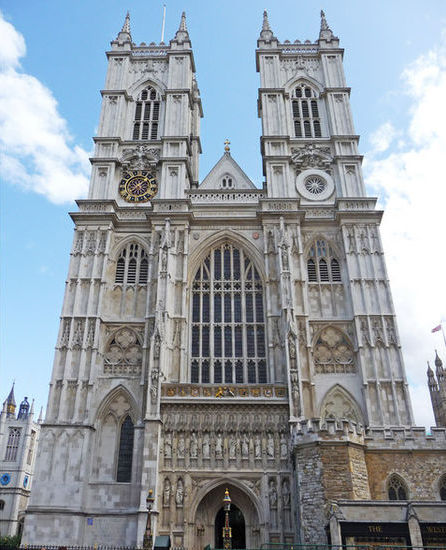 Westminster Abbey had a humble beginning followed by a turbulent legacy.  After a fisherman's vision in 616 AD the ground was marked by a shrine.  Then in the 730's AD some Benedictine monks built an abbey.  In 1045 Edward the Confessor decreed a better building and it was consecrated a decade later.  Henry III, in the mid-thirteenth century knocked it all down and embarked upon a "new improved version" which took an additional 260 years to reach fruition under Richard III.

Westminster Abbey's royal connections kept it safe for the nation throughout the 16th and 17th centuries although religious persecutions varied.  By the 18th century it had risen to be the third highest seat of learning in the country (after Oxford and Cambridge). 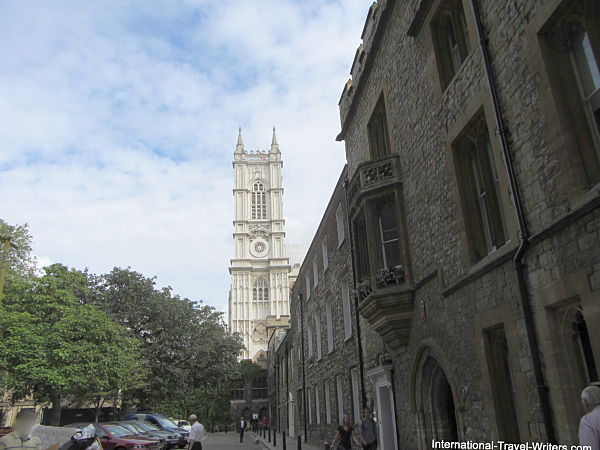 Street with parking near Westminster Abbey.  Liddell's House and the school reception is on the right. 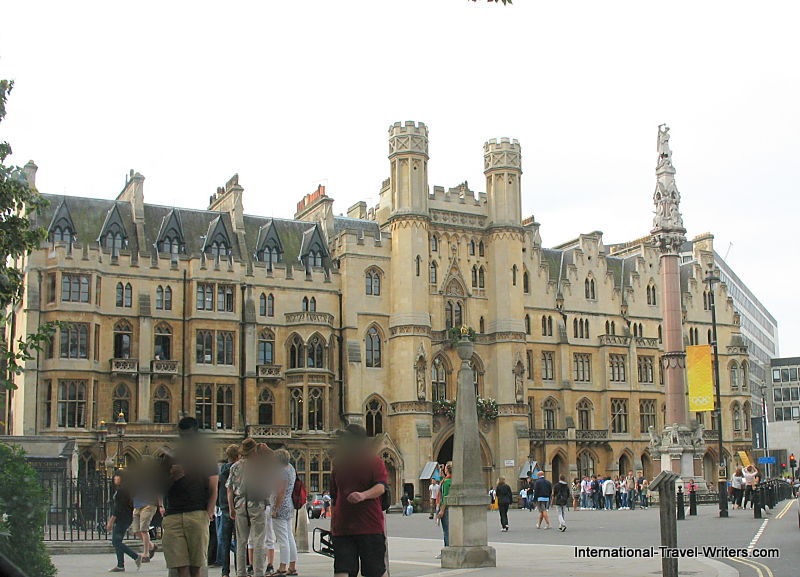 The Royal College of St. Peter in Westminster is better known as Westminster School.  It has a history going back to the 11th century and claims the highest Oxford and Cambridge acceptance rates of any secondary school or college in Britain.  Notable alumni include seven Prime Ministers. 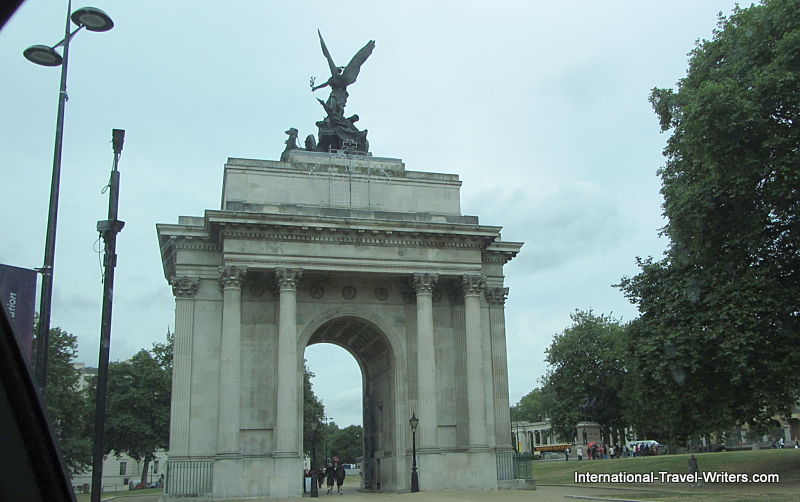 Wellington Arch is also known as Constitution Arch because it's positioned on Constitution Hill.  It is just off Hyde Park Corner (a large traffic island) and was built in 1826, heralding the Duke of Wellington's victory in the Napoleonic War. Additionally, it was meant to serve as a triumphal gateway to London and a northern gate to the grounds of Buckingham Palace, as visualized in 1825 by King George IV.

The Quadriga statue that crowns the top of the arch was added in 1914 just before the outbreak of World War I.  It is entitled Peace descending on the Quadriga of War, and is the largest bronze statue in Britain.  The arch is hollow so it currently contains a three-story museum that gives a history of the arch. 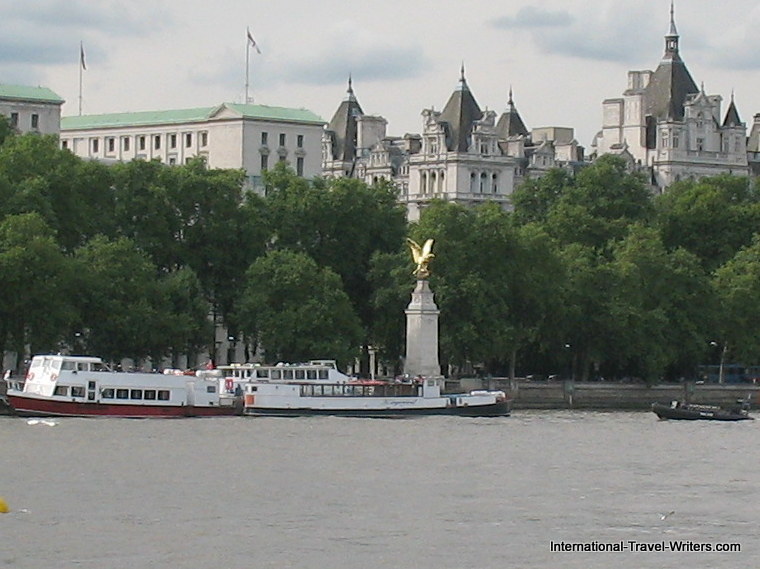 Across the river from our hotel, on the Victoria Embankment, we could see the Royal Air Force Memorial.  It is a pylon of Portland stone with a sculpted and gilded eagle perched on a globe.  It was copied from the RAF badge and dedicated on July 13, 1923 by the Prince of Wales as a memorial dedicated to the royal Air Force in World War I.  Now, later conflicts are included. 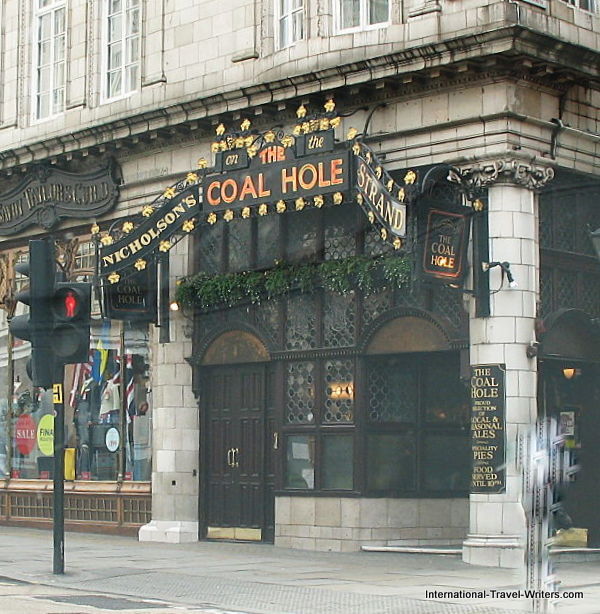 Coal Hole Pub, seen above, is in the Strand area near Charing Cross, Trafalgar Square and Covent Garden.  It's a traditional pub with quality pub food.  Gilbert & Sullivan regularly performed there in Edwardian times.  If you want to try an authentic pub it is open 10am to 11pm daily and until midnight on Fri. & Sat. 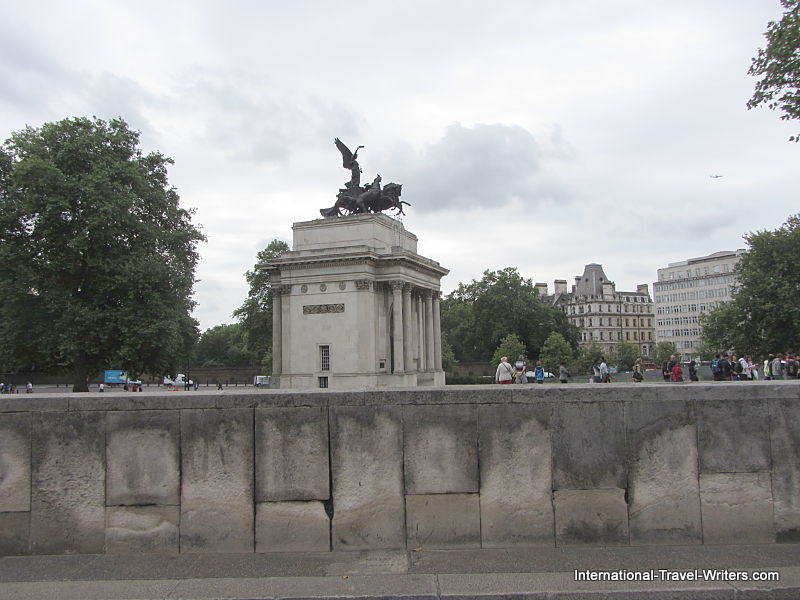 Although London isn’t Rome, both display past victories with statues of homage to their battle tested heroes…one has Admiral Lord Nelson and Wellington versus the other’s Julius Caesar and Augustus.

But Rome has had more than an extra millennium to assimilate the conquered into a reasonably cohesive personality that shapes the Italian “laid-back” psyche while London is a still a vibrant collage of (sometimes conflicting) cultures and social classes that are truly unique…sometimes quirky, extravagant and/or downright charming.  As much as I adore Rome, being Canadian, I have to admit that London feels more like home. 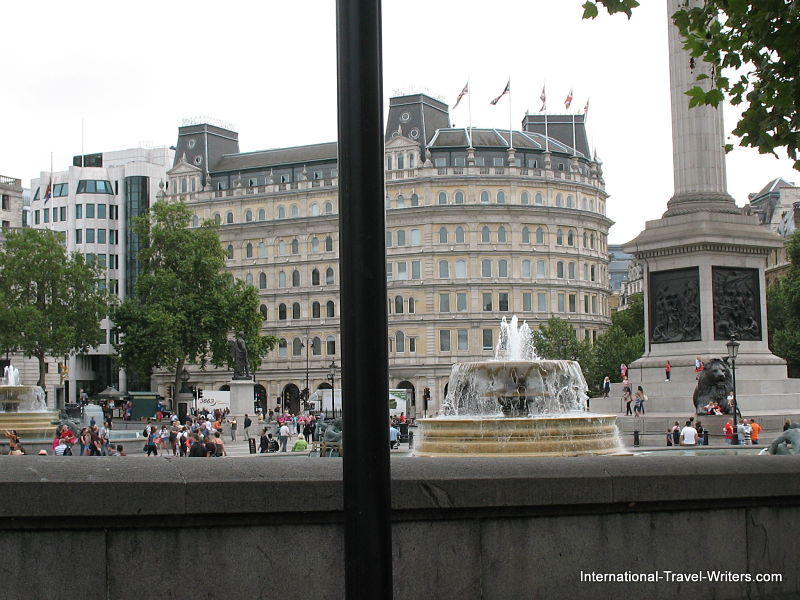 Trafalgar Square is not only the largest square in London, but also the pulsating heart of the city.  Formerly the Royal Mews, the area was redeveloped in the 1840's.   Nelson's Column, surrounded by four huge lions resting at its base, became the central focus point.  Fountains were added and it is a central meeting place for not only tourists but locals.  The perimeter areas contain numerous other venues of historical significance. 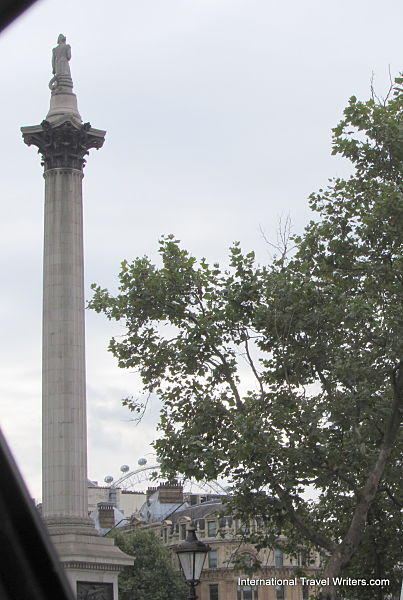 Nelson's Column in the center of Trafalgar Square is a Corinthian column topped by a 17 foot tall likeness of Nelson with four sculpted lions forming part of its tiered base.  Tip to toe it towers to a grand height of 185 feet. 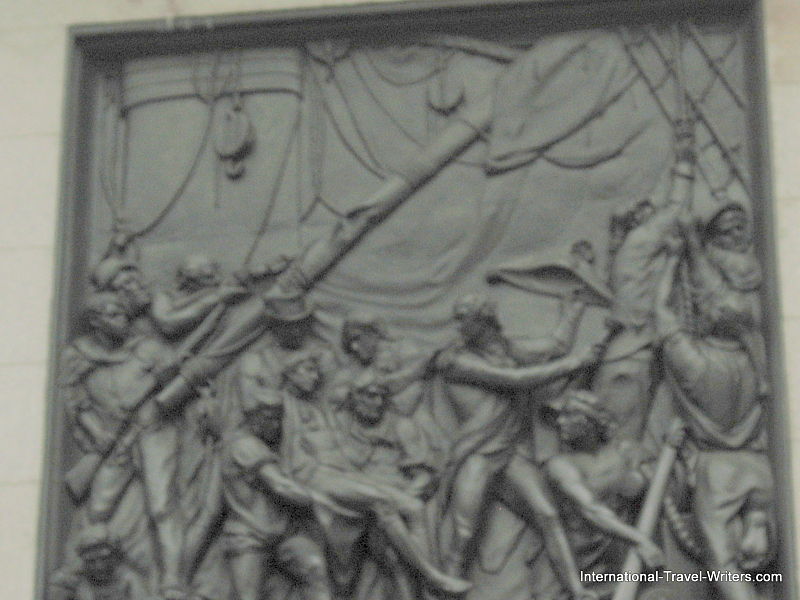 Although it was raised in 1843, the bronze reliefs (cast from the bronze of captured cannons) on the pedestal were not installed until 1854.  They depict the four battles (1797) Cape St. Vincent (1798) Battle if the Nile (1801) Copenhagen, and the one shown above,  (1805) Trafalgar-death of Nelson.  The four lions were added in 1867 to complete the dedication.