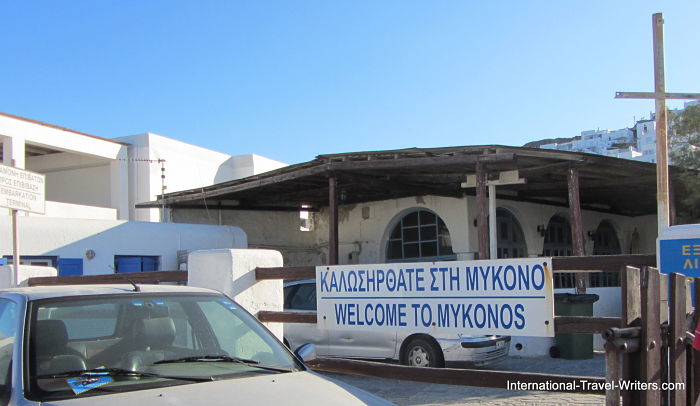 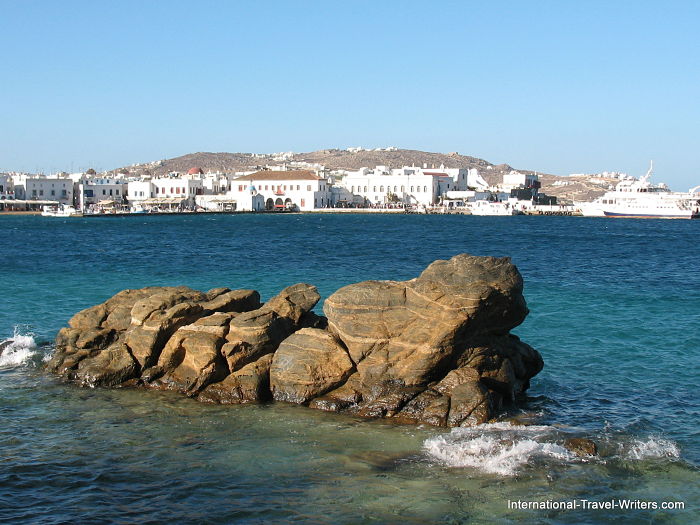 Mykonos is one of the Greek Islands that is high on the list of cruise ship destinations for a multitude of reasons.  It is on Aegean Sea and boasts gorgeous sapphire blue waters, it contains an array of art galleries and designer boutiques, and has a cosmopolitan flair that appeals to both jet-setters and casual sightseers, and it's only 90 miles east of Athens.  Like many of the Greek Islands, the whitewashed buildings are in stark contrast to the deep blue waters of the surrounding seas. 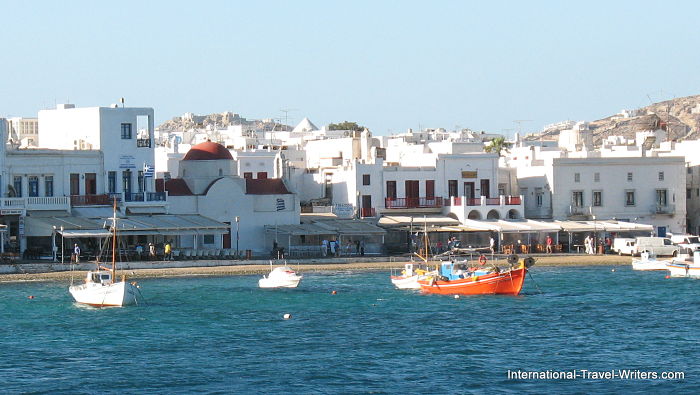 Mykonos is a small island (spans 33 square miles) and is mainly composed of granite.  The highest elevation is around 1100 feet. The population is around 10K.  Mykonos was the site in Greek mythology where the battle between Zeus and the Titans took place.  It is named after Mykons, a grandson of Apollo. 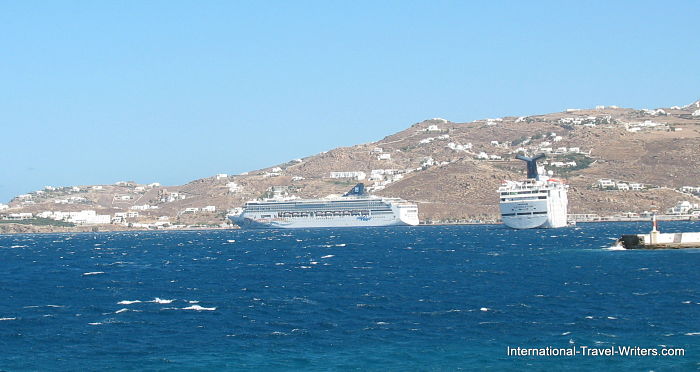 If you are arriving by sea on a cruise ship, double check with the ship's staff and see if you are docking at the new port in Tourlos or at the old port.  If you are arriving at the new port you can make use of the cruise shuttle bus into the town of Mykonos, a 10 minute ride, which will drop you at a parking lot where everything is within walking distance. Of course taxis are available but with the number of persons leaving a ship, there could be a long wait.

If you dock at the old port or are tendering in from a ship at anchor you will disembark really close to the town of Mykonos and won't need a ride because the walk is less than 10 minutes.  If you have opted to take a tour provided by the cruise line then transportation is typically included. 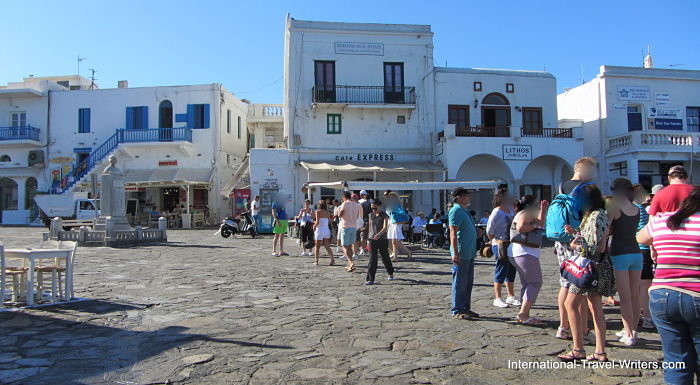 The cobbled streets are easy to maneuver, level and well cared for.  If your intent is just to explore Mykonos then there's no need to book a tour excursion.  However, a quick trip to Delos, a neighboring island with a larger population can be done independently with or without a guide. 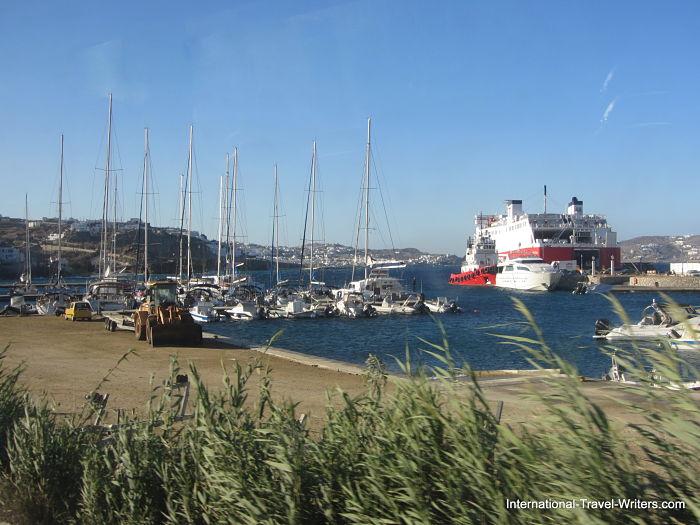 You can walk or grab a cab to the public ferry and hop aboard for the 30 minute ride to Delos.  The ferries depart from in front of Agios Nikolas Church (Tues-thru-Sun.) at 9, 10, and 11 a.m.  There are guides you can hire at this location if you choose to see the ruins in Delos with someone knowledgeable.  The ferry runs under $40 but double check because I'm sure prices will change over time and rates rarely go down...but up...plus exchange rates from dollars to euros vary. 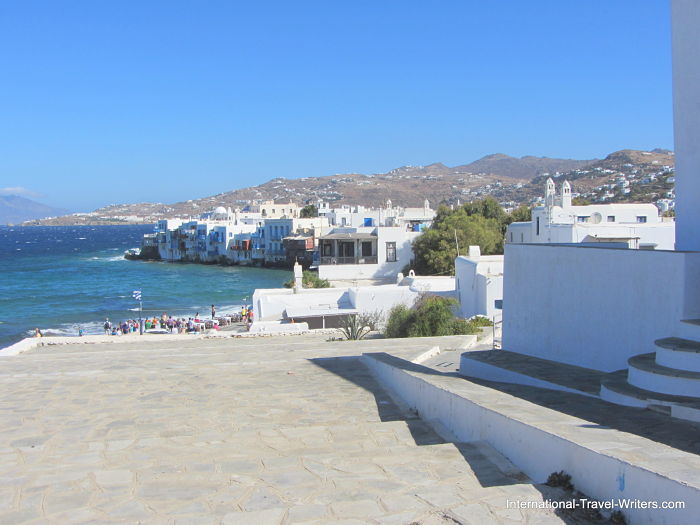 We opted to simply explore the island without any itinerary.  Our first stop was the Mykonos Archeological Museum.  Somehow the thought that the remnants of pottery, arrow tips and jewelery, that have survived through the ages and can be physically seen with our own eyes greatly appeals to us.

We were surprised that such a museum was on this island.  We had been to the huge one in Athens, and although on a much smaller scale of representation, it contained many of the same types of artifacts. Interesting but not a lot new...mainly pottery.  There were enough photos that it's a separate article on this site.

After our escape into history we wound our way through the maze of winding streets, browsing the items in the shops and generally just enjoying the wind break that the buildings offered.  Although a few persons selling excursions on the ship said that the wind today was unusual, in talking with the locals who spoke English, it's pretty much a common event...makes sense to build the town in a manner that cuts down on the wind by having traversing streets. 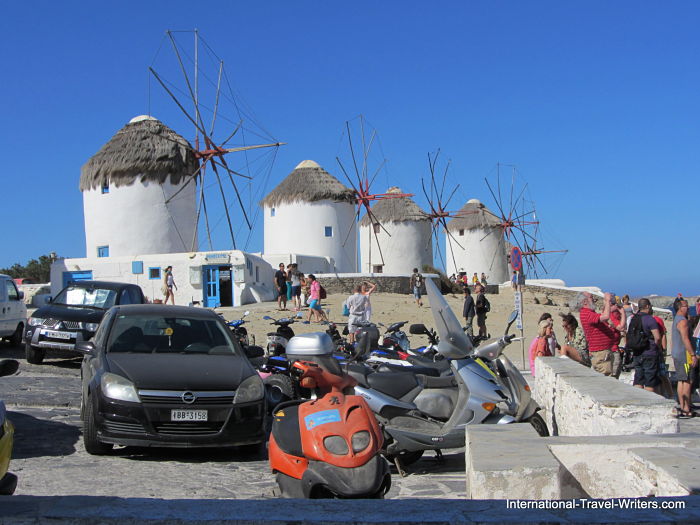 We came upon an area near the top of the winding hill that just blew us away (pun intended).  Windmills!  These windmills were the first thing we saw when cruising into the harbor and they face north towards the strongest winds that originate from that direction most of the year.

There are 16 windmills on Mykonos and 7 are located on the hilltop but we just got a photo of 5 at this site.  The majority were built by the Venetians in the 16th century but they continued to build the rest into the early 20th century.  They were used to mill wheat but production was gradually phased out and ceased in the middle of the 20th century.  Similar windmills are found on most of the Cyclades islands in the region. One of the windmills has been converted into a museum and offers spectaculars views over the harbor.

Whitewashed houses on the hills, small beaches below, the views up high are remarkable.  However, with such high winds we chose to descend to lower areas. 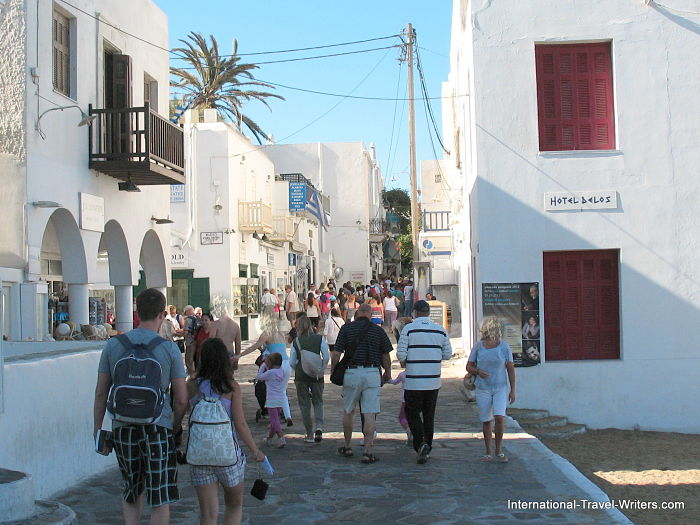 A few of the major streets are straight, not twisting and turning on uphill terrain, and they tended to have hotels and major retail shops lining the perimeter versus the "mom & pop" style smaller venues on the winding streets.

Traditional taverns and bars abound on the island.  This one was rather unique with it's mascot boat and logo perched beside the tables.  The also have gay bars nearby that cater to those who wish to be separate from the masses.  Most bars have snacks and some even have full meals if you want to just drop and rest your feet for a time. 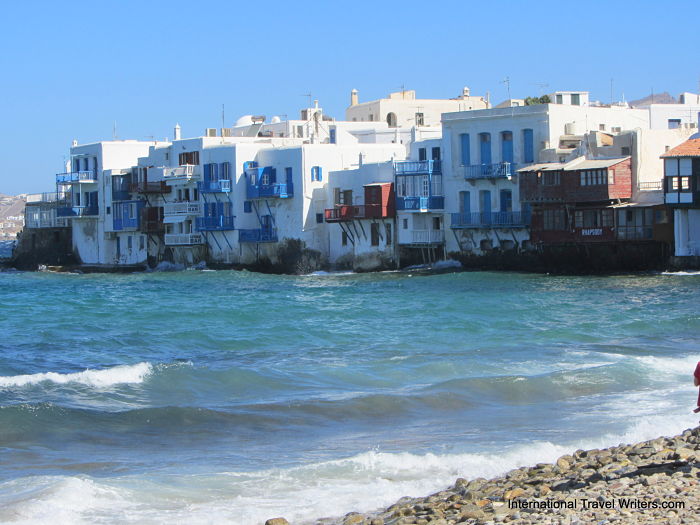 Mykonos has an area called "Little Venice"...obviously named because the buildings have been constructed on the very edge of the water with some balconies even overhanging the sea. But Venice doesn't have the heavy surf to deal with on the canals, only on the major outer sections. On the island, it's a charming and serene vista even with the choppy waters. 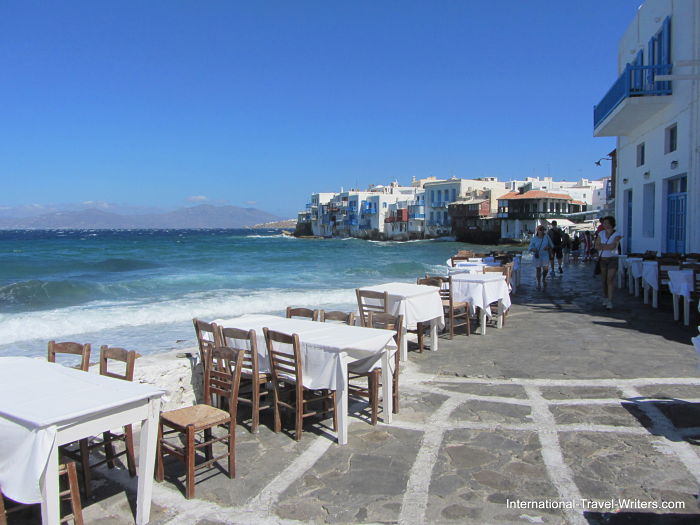 Restaurants in "Little Venice" have small clips that hold the table cloths onto the tables when the wind is threatening to seize them and transport them away.  This day, no one was venturing to eat outside, but you could envision a calm day with a marvelous view while you dined leisurely. 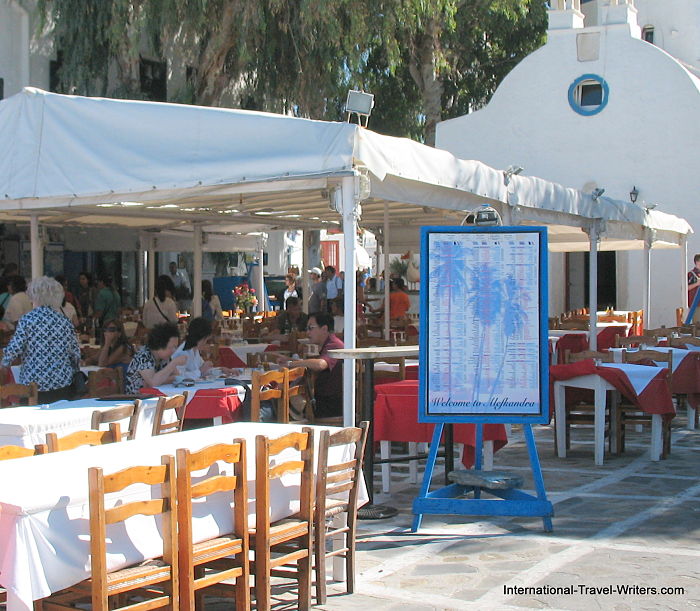 We found a restaurant, Alefkandra's, with a fish tank where you picked out the crab or lobster that you wanted and they would cook it immediately for you.  The main attraction of this particular place (in a square of the same name) was that it was removed from the wind, being inside a corridor of buildings it had protection, plus they had a huge canopy to protect your from the sun if you chose an inner table but still had a sea view on one side.

When we had finally meandered down the hill, after having looked into the numerous shops and stopped for lunch, we arrived at the what you might call the town square.

Above you see the photo of vendors selling fresh vegetables.  Locals as well as tourists with cooking facilities in their accommodations could shop for fresh produce along the waterfront street.  The photo alongside is the statue of Manto Mavroyenous, a hero of the Greek Revolution against the Ottoman's in 1821, also located in the square. 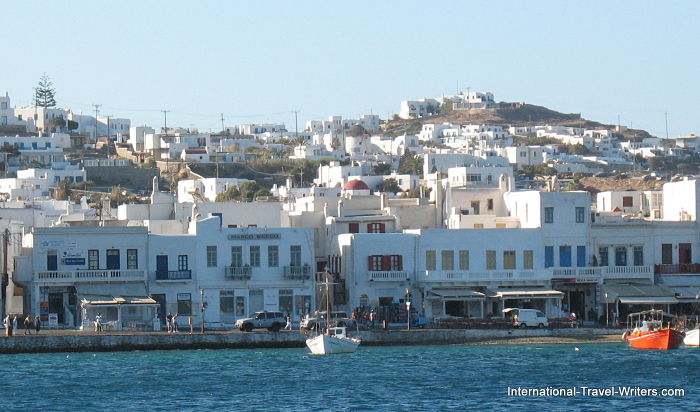 Mykonos is utterly captivating.  Sounds trite...but it has almost anything you could want for a short stay.  For longer stays, unless on a honeymoon or getting that once-in-a-lifetime book written...excitement may wane unless you are an aficionado for one of the famous pastimes  that are popular here.  If you love to party, there is an active nightlife scene with a variety of clubs and bars, numerous restaurants with simple but well-prepared food, and the beaches! 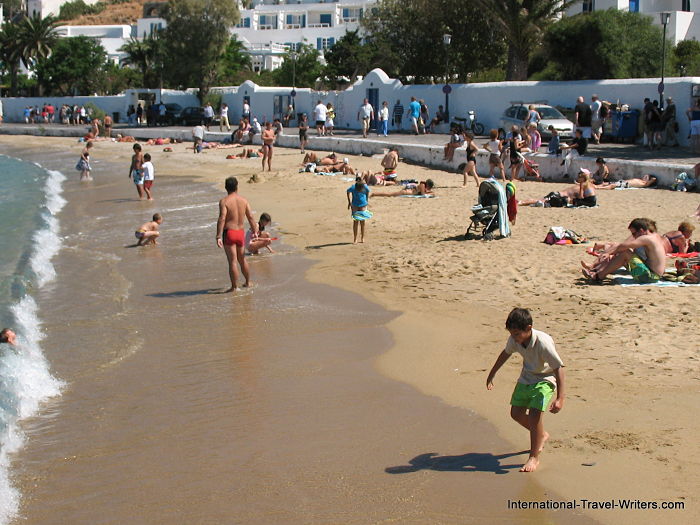 Yes, there are numerous beaches for sun lovers and for younger souls who want to brown thier bodies the beach selections are many...a few decades ago I'd have been first on the sand.  Or, you can take a day to see a lighthouse, visit the Aegean Maritime Museum, or take quick excursions to neighboring islands.

My impression of Mykonos, on this short visit, was that it was a great location to spend a short time, enjoy good food in a variety of cuisine venues, enjoy the beaches, and simply veg and recharge your batteries without any pressures.  A place to hire a boat and feel the spray in your face, a place to relax and reconnect with loved ones, and overall...remember the simpler things in life have their own charm.