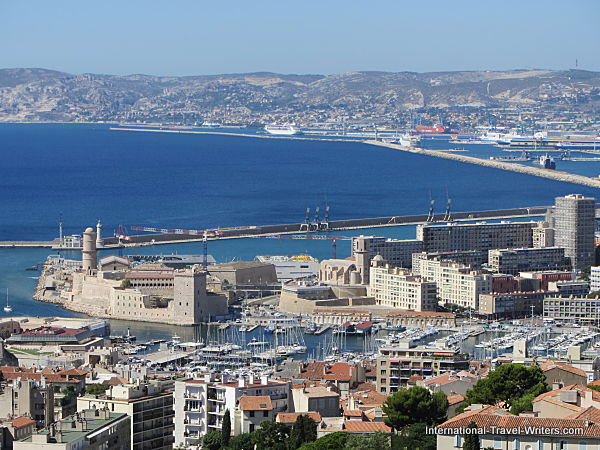 Marseille has been called the oldest city in France because it was founded in 600 B.C. by Greeks from Phocaea as a trading port.  Currently it is the second largest city in France boasting the largest commercial port and over one third of the population can trace their roots back to Italy. 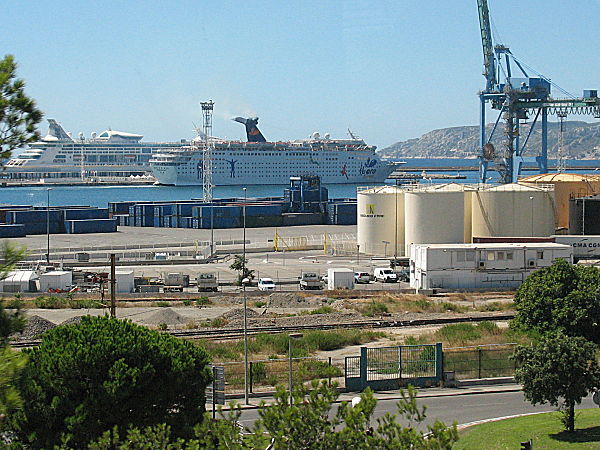 Our cruise ship had chosen Toulon as their landing port and we had been transported by bus for our tour of the larger city.  However, we did see cruise ships in the harbor nearby the commercial docks.  The commercial areas had huge storage containers and cranes that were obviously utilized for this heavily trafficked zone.  There were also ferry terminals.

There is a canal from the commercial port to the Rhone River so that supplies can be shipped to other areas of France making the harbor strategically located.  Although the port has access to the extensive waterway network of France, petroleum is shipped to the Paris basin by pipeline. 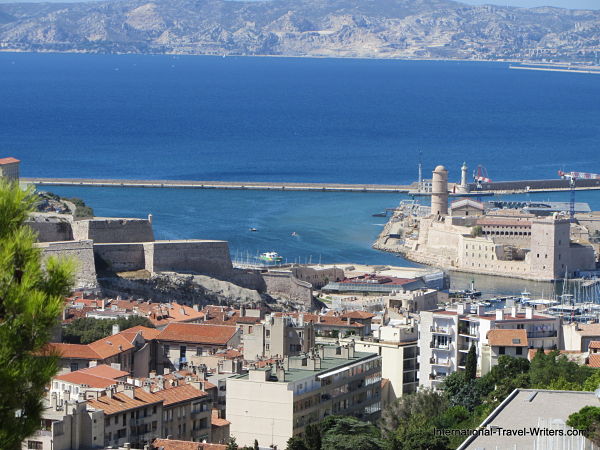 This is a view of the two forts.  On the right (north side) you can see the 17th century Fort Saint-Jean, incorporating the 12th century Commandry of the Knights Hospitaller of St. John.  On the left (south side) is Fort Saint Nicolas.  This was a major area during the Crusades. 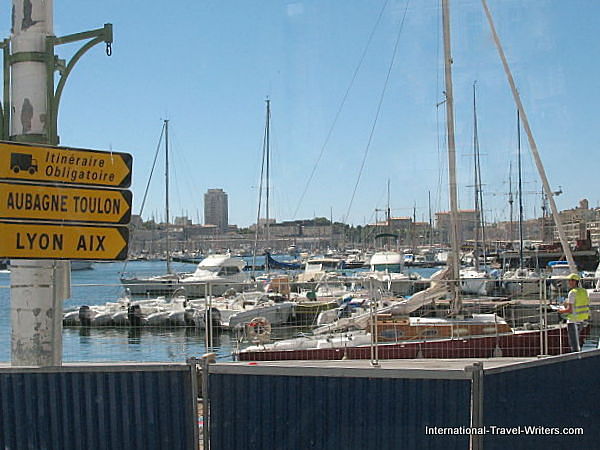 The city boasts numerous marinas but the Vieux Port (old port) is where Greek settlers landed and it's still in use today.  Driving along the Corniche John Kennedy, the waterfront road, you will see  a variety of marinas and marine vistas.

There are boats that leave from Old Port and will take you and drop you off at picnicking spots ( 3 hour trip is about $36 per person) and Bleu Evasion has snorkeling trips with skippers (3 hours are from $65 per person).

Chateau D'If sits out in the Bay of Marseille like Alcatraz does with San Francisco Bay.  Similarly, it was used as an escape proof prison.  Oringinally it was built in 1524 by Francois I as an island fortress to protect against enemy attacks and make sure supplies could arrive by sea.  It was converted to a prison in the 17th century to jail those opposing royal power.  It gained its fame because it was used as the backdrop for the Alexander Dumas book, The Count of Monte Cristo. 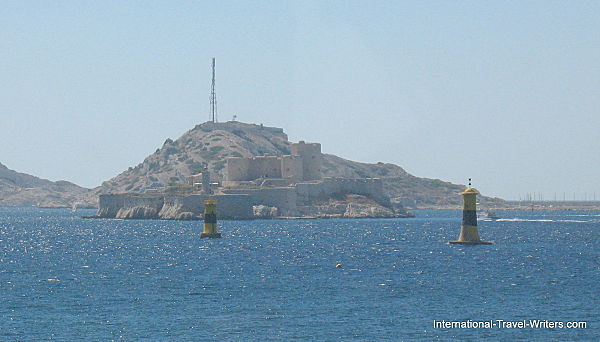 This is Chateau D'If from a different angle with one of the other islands behind it.  There are 4 islands in the Frioul Archipelago and D'If is most famous because of the literary work.  Another thing that Chateau D'If and Alcatraz have in common is that they became too costly to maintain and were closed as prisons.  Both are now just tourist attractions. 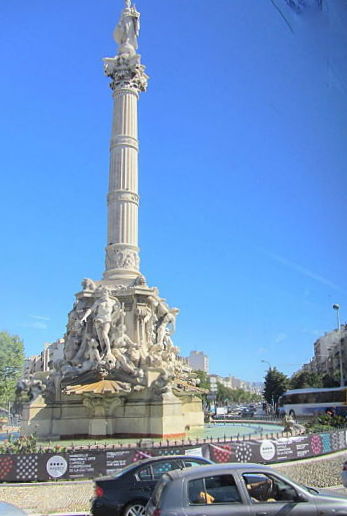 The Fountain of Castellane Place is not far from the center of the city.  It is named after Marquis de Castellane-Majastre who inspired the work and contributed heavily to the project.  Until the 20th century there was an obelisk at the center of the structure which was moved to another location.

Jules Cantini, a patron, offered to build a fountain to the glory of water and replace the obelisk.  The city accepted and the fountain was opened in November of 1911. It is made out of Carrara marble and represents the three important rivers of Provence (Rhone, Durance & Gard).  It is placed at the northern entrance into the city adjacent to the road to Aix. 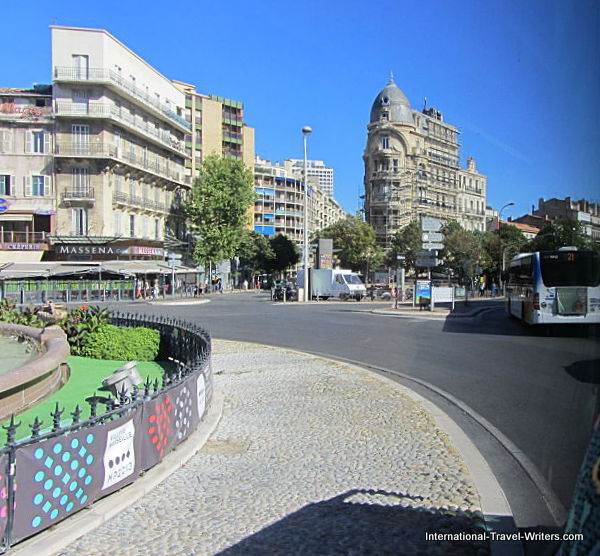 The fountain is now the centerpiece of a large and impressive public square where local people and visitors gather during warm summer months and enjoy watching the activities of a busy square while sitting in a sidewalk cafe sipping wine or other beverages. 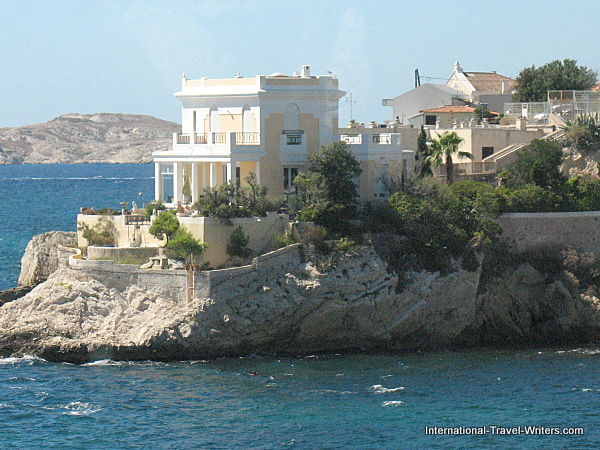 As you drive along the waterfront road you can see magnificent mansions built out on the cliffs overlooking the blue waters.   I couldn't help but think what a wonderful view there was from the upper terrace.  Great place to sit and sip a glass of wine while watching the sunset. 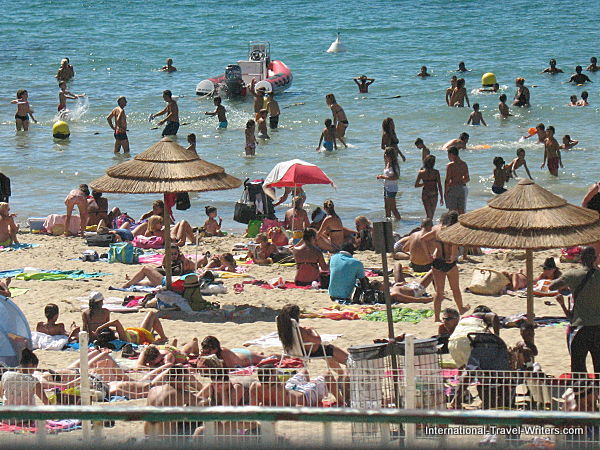 Beaches in the city are not so terrific because oftentimes they are polluted.  Yet there are some small beaches (see photo above) south of the city center between La Pointe Rouge and La Madrague harbor that although they are cleaner are also crowded.  There are some larger, sandy beaches about 20 minutes away by metro bus.  Or, you can swim in Marseille's Calanques (white limestone cliffs) National Park. 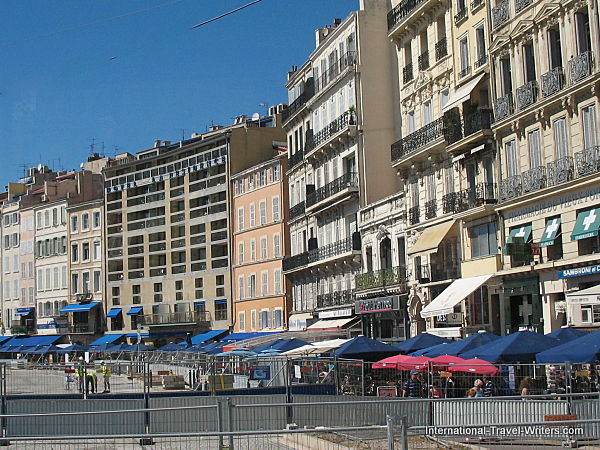 There were a lot of hotels lining the waterfront overlooking the marinas and although there were some road construction barriers in some sections, for the most part it was tranquil and the sidewalk cafes were full.

This is a city with many offerings such as exciting nightclubs, fabulous restaurants that serve the best of French cuisine, plus multiple museums and monuments to top it off and add to your cultural experience. 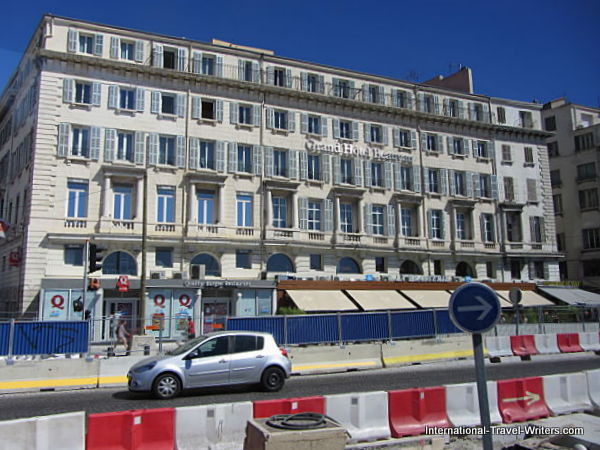 The Grand Hotel Beauvau was built in 1816 and even Chopin stayed there.  It has been redone in Napoleon III and most rooms have port views.  Road construction barriers were also affecting this area.  Double rooms started around $150. 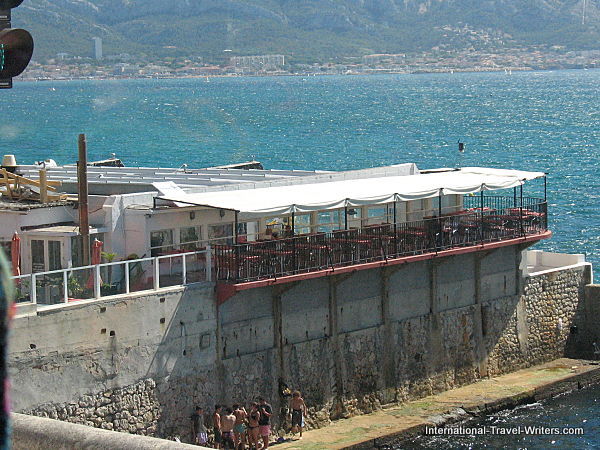 Marseille has the reputation for being the originator and home of Bouillabaisse which is an excellent fish-based soup served with la rouille (a garlic-saffron sauce) and bread similar to crostini.  Sometimes it has grated cheese sprinkled on top.  Their authentic bouillabaisse is not an inexpensive dish but it sure is a full meal with the variety and quantity of seafood it contains.  It is served in some fine restaurants in the city as well as restaurants along the waterfront that also offer spectacular views.

The average price for good bouillabaisse seemed to be around $60 rising to $220 at Le Petit Nice Passedat where Gerald Passedat is the only three star Michelin chef in Provence. 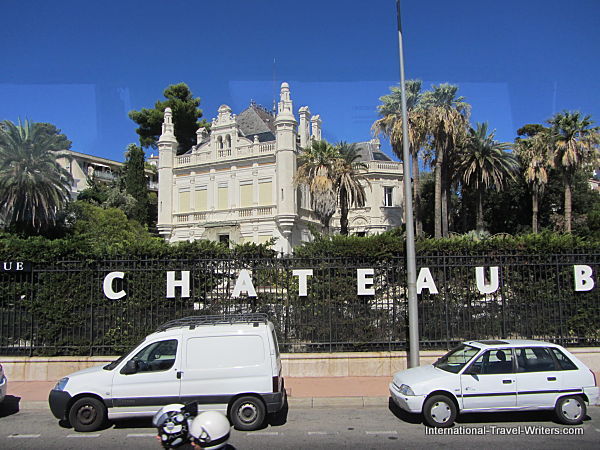 Situated on the Corniche John Kennedy that travels along the waterfront you can also access Berger Castle in a park opposite the Mediterranean.  It houses an exclusive fitness spa facility for the privileged.  They offer sophisticated care with whirlpool baths, jet showers, massages, mud applications, seaweed therapy, paraffin, effusion massage, shiatsu, etc...etc.  They even have couples packages and male programs that encompass week-long stays. 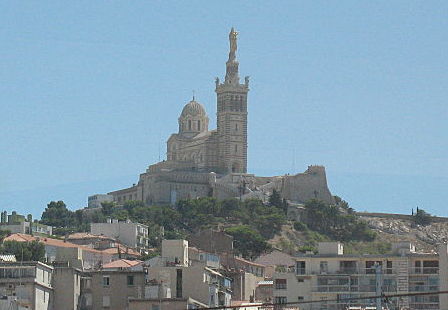 Visible from almost everywhere in Marseille, built on the city's highest point, is the Basilica of Notre Dame de la Garde.   The site served as a look-out post dating back to Roman times. In 1214 a small church was built there and sailors would climb the hill to pray for safe harbors.