Ancient Athens Ruins do Battle with Time and Smog 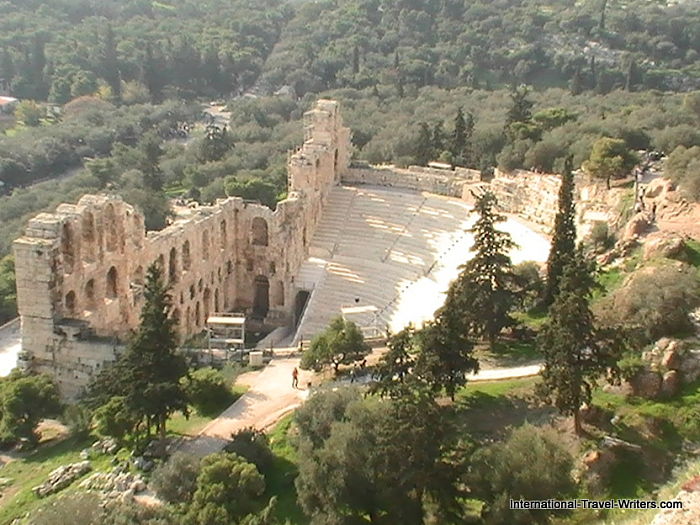 Ancient Athens ruins are somewhat overwhelming at first.  Rome's ruins certainly rival what has survived in Athens but doesn't battle the same atmospheric conditions and smog that make it a constant battle to preserve what is now crumbling in the Athens area.

The photo above shows the Odeon of Herodes Atticus, an ancient theater, and proves that some of the Athens ruins can be restored for current use and yet retain part of their former charm.  But not all of the crumbling structures are salvageable. 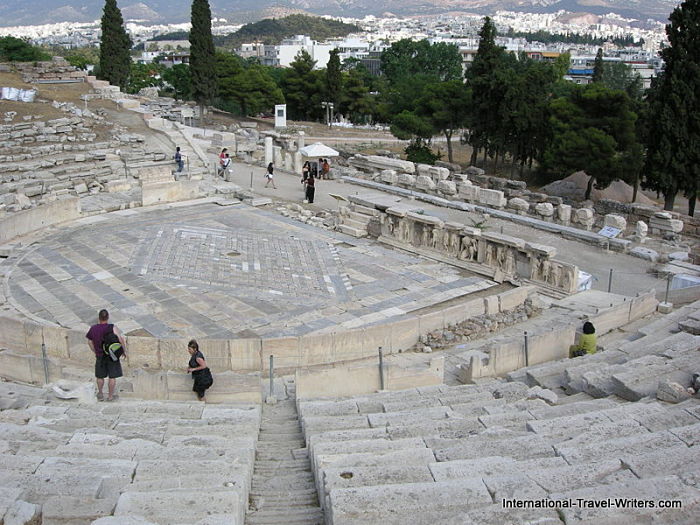 Another of the ancient Athens ruins that exists in viewable form is the Theater of Dionysus.  It was used for festivals to honor Dionysus, the god of wine and revelry.  The site is on the south slope of the Acropolis and nearby on the southwest slope is the Odeon of Herodes Atticus, top photo seen above.

Excavations started in 1838 and continued throughout most of the following century.  It has been dated to the 6th century B.C. They have calculated that 17,000 spectators could be accommodated in this venue. Around the perimeter you can see the stone thrones that were used by the dignitaries of the day. 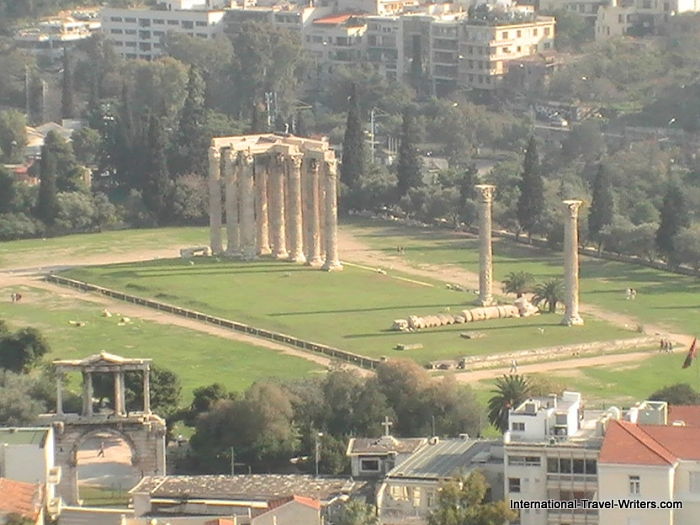 Little remains of the Temple of Olympian Zeus (seen above)  It is a colossal remnant of a temple to Zeus, king of the Olympian gods.  Although construction started in the 6th century B.C. by Athenians who dreamed of building the greatest temple in the ancient world, it wasn't completed until 638 years later.

By this time the 2nd century A.D. Roman Emperor Hadrian was reigning over the area.  During the Roman rule it did gain cult status with its largest temple and statue in Greece at that time.  However, it fell into disuse after being heavily damaged during a barbarian invasion in the 3rd century A.D.  After the fall of the Roman Empire, the temple was ransacked frequently for materials to supply other building projects elsewhere in the city. 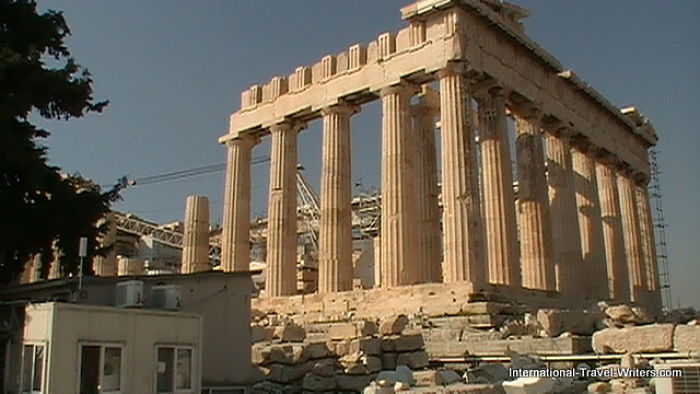 The Parthenon is a temple atop the Acropolis in Athens, Greece.  It was dedicated to their patron deity, the goddess Athena and was built over the older temple of Athena that was destroyed in the Persian invasion of 480 BC. When the Athenian Empire was at its peak construction began.  Started in 447 BC and completed in 438 BC its decoration and finishing touches weren't done until 432 BC.

It is considered the most important building to survive from the Classical Greek period.  Not only was it the culmination of the development of the Doric order but its sculptures achieved high status in the world of Greek Art.  Today the Parthenon is regarded as an enduring symbol of Ancient Greece and a prime example of ancient Athens ruins.

The Parthenon was quite the chameleon over the centuries.  It was used as a temple, then a treasury, in the 5th century AD it was converted into a Christian church and dedicated to the Virgin Mary; it was subsequently turned into a mosque by the conquering Ottomans in the early 1460's, and in 1687, an Ottoman ammunition dump inside was blown up by Venetian bombardment.

The ravages of the smog aren't taken lightly anymore and you can see scaffolding and metal rods to reinforce the structures in many renovation areas of ancient Athens ruins.  We saw this work in evidence in both 2009 and 2012 when we were there. 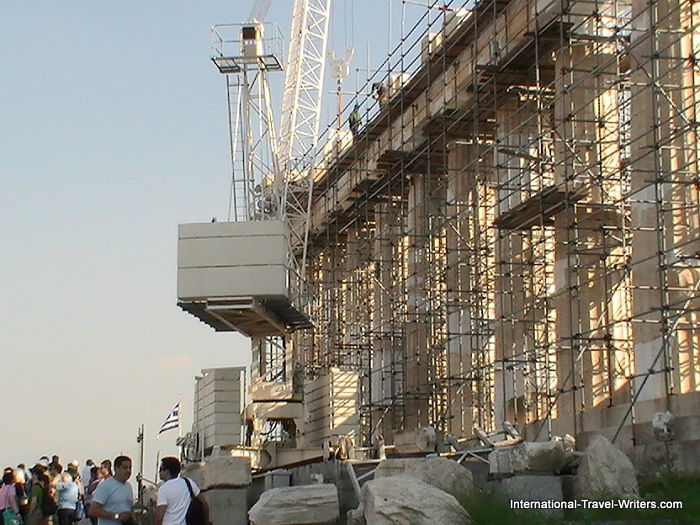 Although the Greek government made a decision to restore the Parthenon and other ancient Athens ruins, it took until 1983 for a committee to be formed to oversee the project.  There were mistakes; errors in materials that would supposedly do the job in prior attempts were discovered.

For instance, originally iron pins were coated in lead which protected the iron from corrosion but stabilizing pins added in the 19th century weren't coated so they corroded.  The corrosion of the rust expanding inside caused cracks in the marble.  Now all new metalwork uses titanium which is resistant to corrosion while still being light and strong.  New Pentelic marble is being used from the original quarry and as it ages it will start to match the weathered remnants. 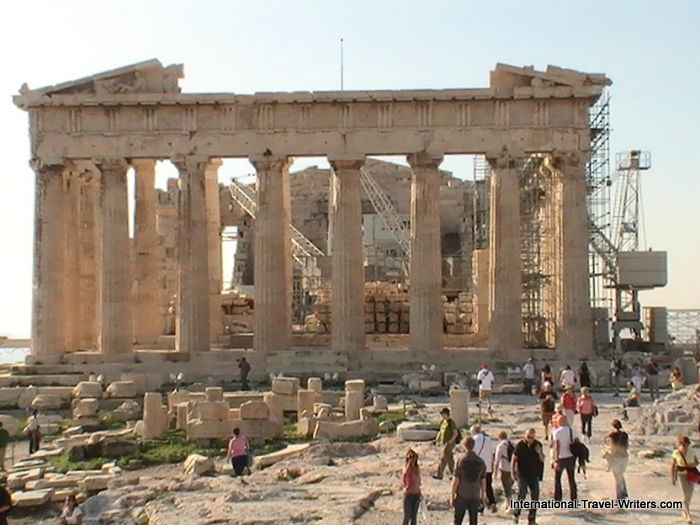 Heavily damaged, in 1806 the British Earl of Elgin removed some of the surviving sculptures (Parthenon Marbles) with the permission of the Ottomans.  Now known as the "Elgin Marbles" they were sold ten years later to the British Museum in London where they are still on display.  Since 1983, when former actress Melina Mecouri started the ball rolling while she was Cultural Minister, the Greek government has been determined to get the sculptures returned to the country.

A few sculptures from the Parthenon are also in the Louvre in Paris, in Copenhagen and other locations but at least 50 percent of them are in the Acropolis Museum in Athens. 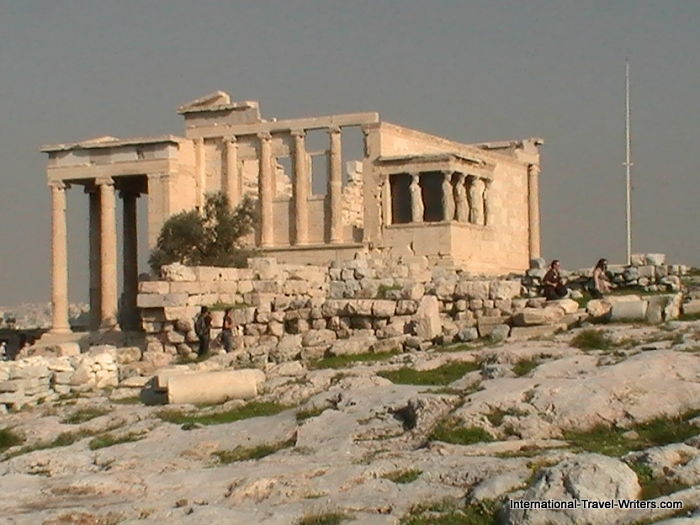 The Erechtheion is located on the north side of the Acropolis.  this temple is dedicated to both Athena and Poseidon and was built between 421 and 406 BC.  It was built of marble from Mount Pentelikon with friezes of black limestone from Eleusis. 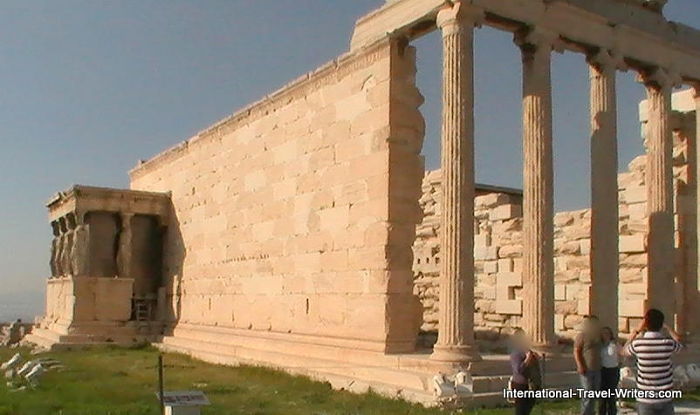 The Porch of the Caryatids has six Ionic columns on the north side and on the south is the renowned "Porch of the Maidens" with six robed female figures (caryatids) that are supporting the columns.  The porch was built to conceal the huge 15 foot beam needed to support the  southwest corner over the metropolis after the Peloponnesian war caused budget cuts. (sound familiar?) 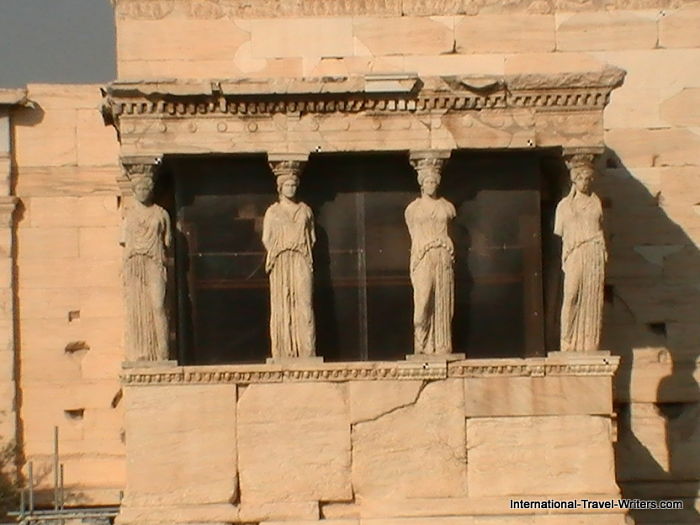 The Erechtheion went through a restoration starting 1977 and in 1979 the five original Caryatids were moved to the Old Acropolis Museum and replaced by exact replicas.  In 2007 the originals were transferred to the New Acropolis Museum.  Restoration work continued until 1988. 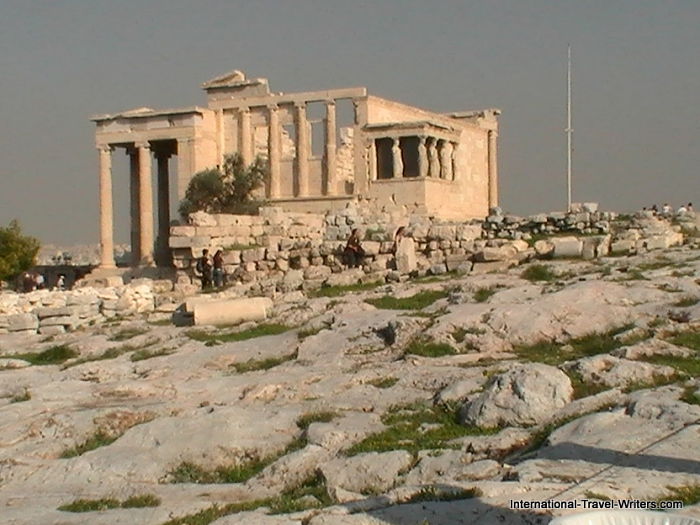 The Erechtheion has had numerous repairs starting in the first century AD after being burned by the Roman general Sulla.  It was altered during the early Byzantine period and transformed into a church honoring the Theometor.

It became a palace under Frankish rule and the Turkish commander's harem was housed there in the Ottoman period.  During the Greek War of Independence it was bombarded by the Ottomans and suffered severe damage. 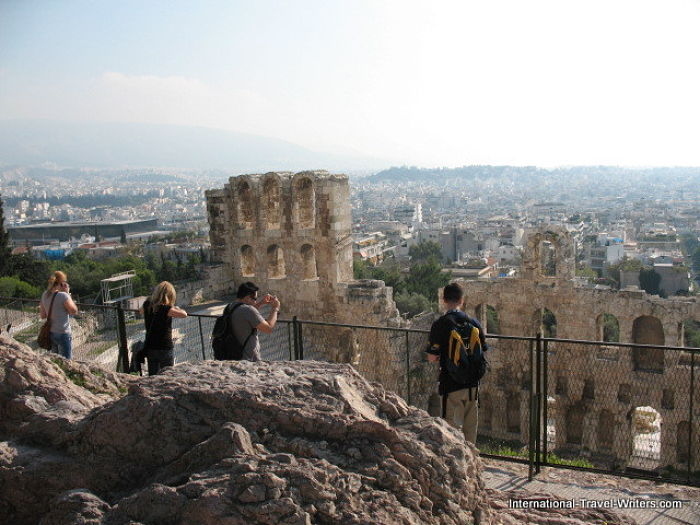 In some of the areas of the ancient Athens ruins there are metal fences to prevent accidental falls while filming or taking snapshots. 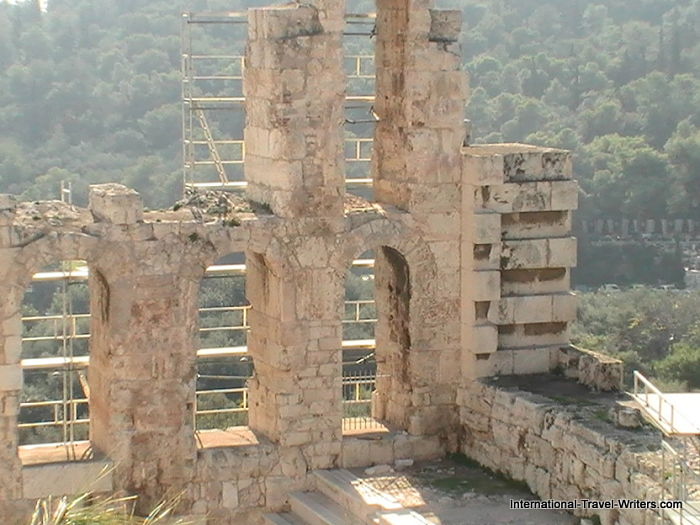 Ancient Athens ruins with scaffolding behind so repairs can continue. 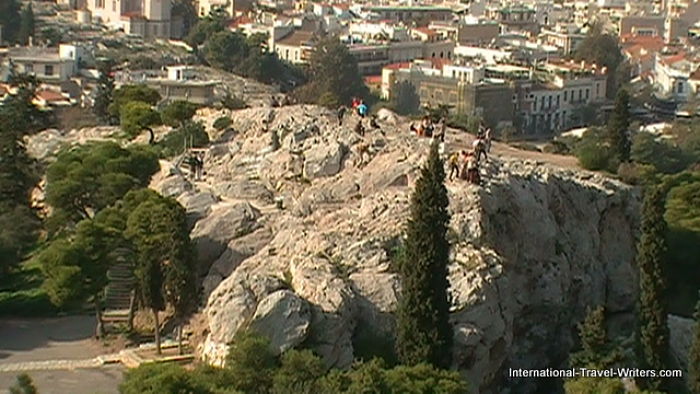 When you are high up on the Acropolis and look down you can see people crawling like ants in the ancient Athens ruins, exploring every crevice. 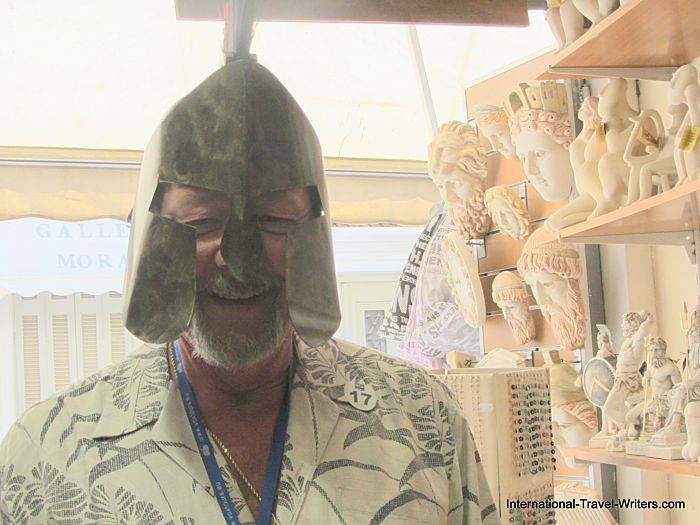 Sparta had been the catalyst in firing up my imagination during the reading of the famous Pass of Thermopylae battle in a history class many (too many) moons ago.

In an old school notebook used in my history class I came across scribbling written years ago when I was 12 years old, inspired by tales of Leonidas and his 300 Spartans doing battle against Xerxes.  I kept the poem I had written and although it's written by a kid and certainly no masterpiece, it expresses my thoughts then and now of Sparta.

T'was the Pass of Thermopylae,

at break of day,

that thundered with yells of dying men,

compelled to fight to the end.

There was not a retreat,

from those brave Spartan men,

although the Persians had them beat.

Others cowardly ran, as winds swept over

of this brave Spartan deed.

died upholding a creed...met their fate.