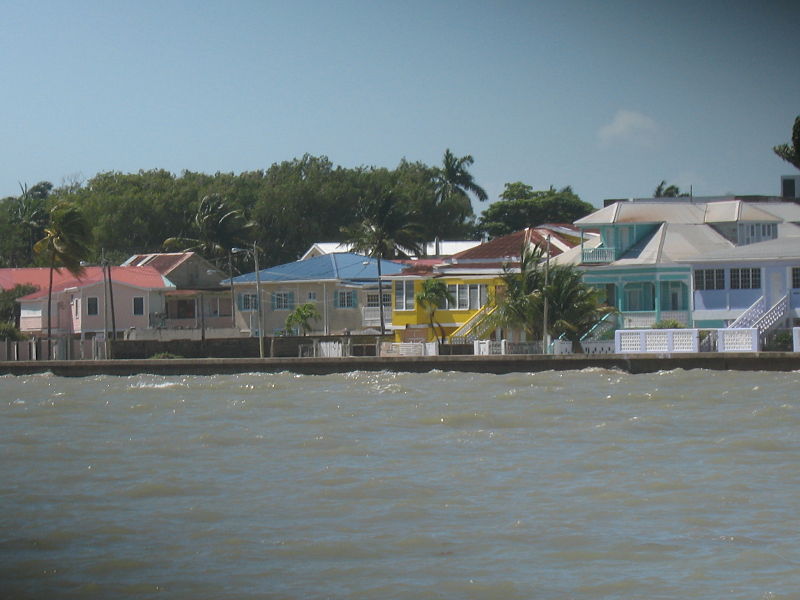 Belize is a country located on the north eastern coast of Central America.  It is the only country in the area where English is the official language.  However, Spanish and Kriol (Creole) are more commonly spoken.  It is bordered to the north by Mexico, to the south and west by Guatemala and to the east...the magnificent Caribbean Sea.

The population is diverse but is the only nation in the region with a British colonial heritage.  It is 8860 square miles of land but only has a population of approx. 315,000.  In 1862 Great Britain declared it a British Crown Colony and named it British Honduras and later, in 1964, Britain granted British Honduras self-government.  In 1973 British Honduras was officially renamed Belize.

Belize attained full independence in 1981 but the British left 1500 troops to protect Belize from a Guatemalan threat.  Guatemala had claimed that Belize was their territory but finally in 1992 the Guatemalan President formally recognized Belize's Independence and Britain kept troops there until 1994.  However, as of February 2012, Guatemala still lays claim to some territories and the matter isn't entirely resolved. 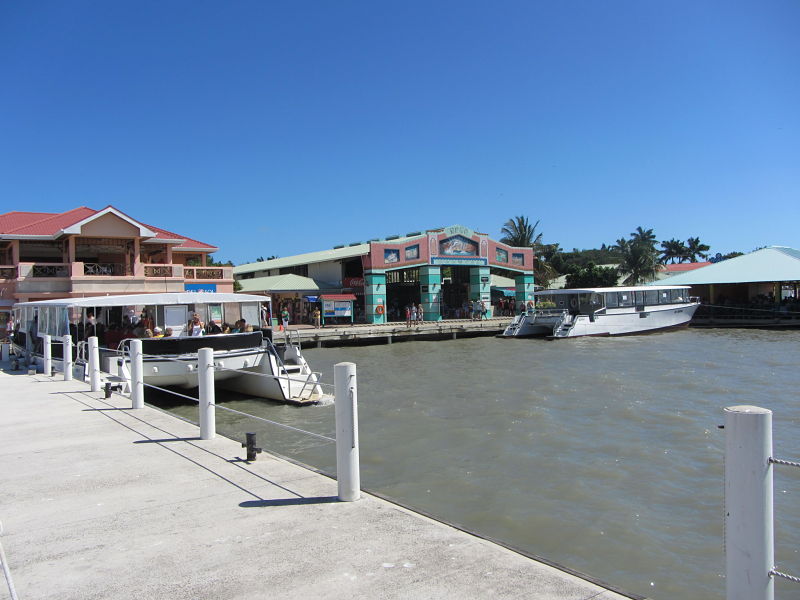 The docks at Belize aren't able to accommodate large cruise ships so the ships are anchored off shore and either small tenders belonging to the ships transport the passengers ashore or larger vessels chartered by the cruise lines perform the task.  Once shore, there are myriads of shops lining the harbor for those visitors that aren't taking tours to other locations away from the city. 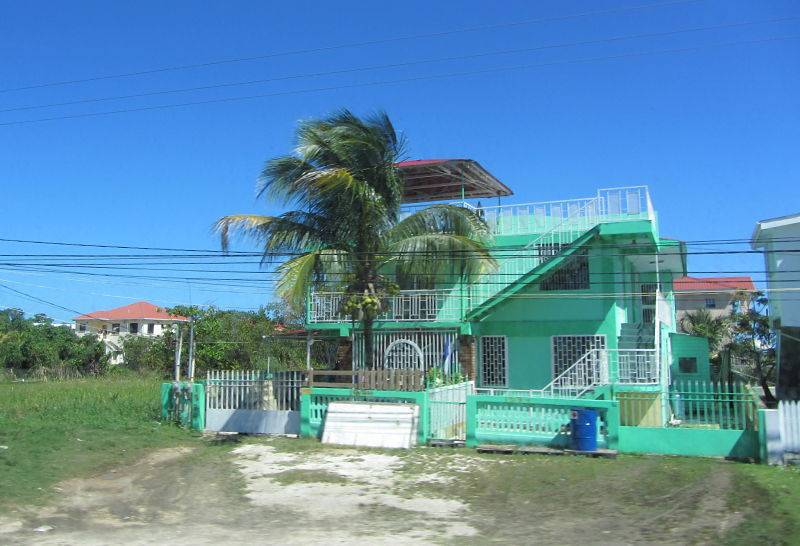 We had chosen to take a tour to the Mayan ruins of Altun Ha.  Although the distance was only around 30 miles, the drive was about an hour from the pier because the roads aren't in great repair.  Along the way we saw colorful homes and buildings lining the "highway".  Turquoise and yellow were the predominant colors but lavender and red were also popular hues.

Although the city areas looked decent, the guide told us that crime is a major concern in the city.  Parts of the inner city also looked pretty rough and uncared for.  Many citizens move outside the city limits for a safer and quieter life.

Altun Ha is the name given the ruins of an ancient Mayan city located in Belize.  The site covers an area of about 5 square miles and excavations weren't started until around 1961.  Numerous jade carvings, discovered by local villagers, attracted attention so interest in their origins ensued. 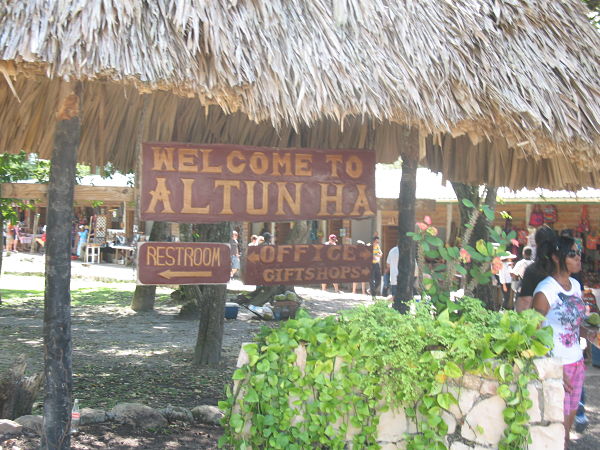 Initially, the Royal Ontario museum was involved in unearthing some of the site and a field season in 1971 involved laboratory analysis of ceramic findings.  It is believed that some of the functions at the site were ceremonial and others were burials.  Some of the objects discovered relate to an association to Teotihuacan. 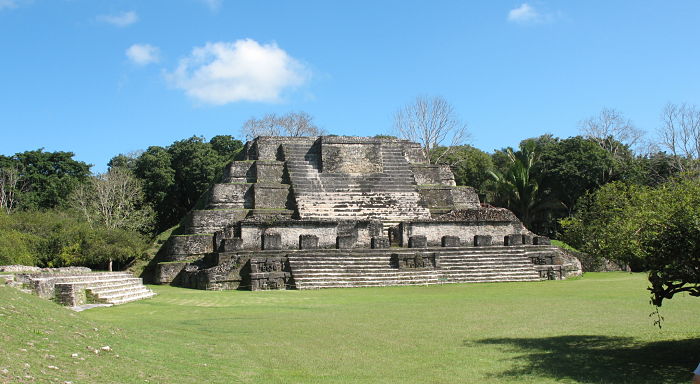 The main structure, called the "Temple of the Masonry Altars", is nicknamed "The Sun God's Tomb".  The Tomb contained the skeleton of an adult male with many offerings.  A 6 inch high jade head of the Mayan Sun God, Kinich Ahau, weighing nearly 10 pounds,  was found here.

It is believed that the area was first settled around 250 B.C.  and construction of the buildings started in 100 A.D. and continued until the 10th century.  It is thought that it was also a trading center.

Altun Ha is made up of two central plazas surrounded by temples that enclose the area.  The larger plaza is the site of a tomb discovered beneath one of the temples called Temple of the Green Tomb. 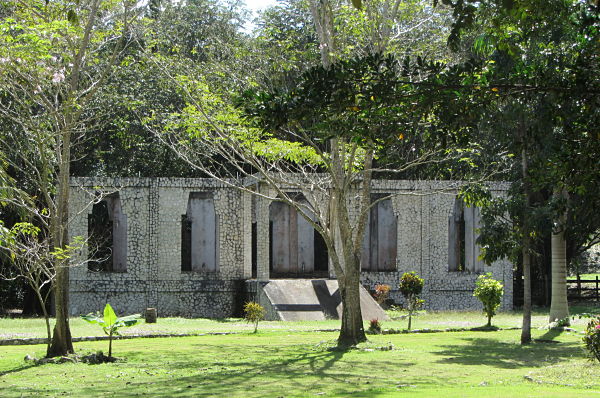 The area is extremely clean and well maintained.  Even the restrooms are spotless both inside and out.  This was certainly a bonus that was unexpected. 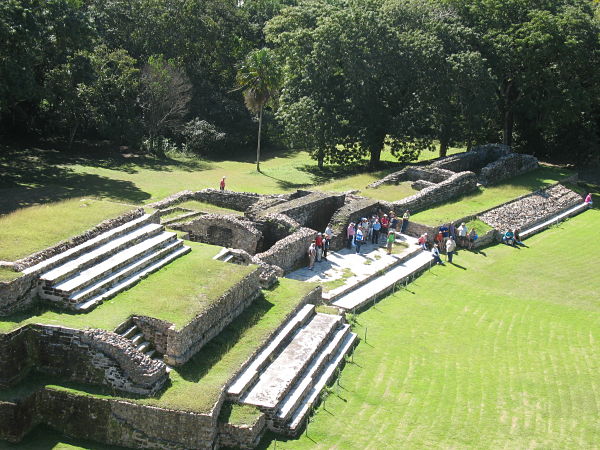 My husband climbed to the top of the main pyramid and was able to get a photograph with a different perspective from up there. 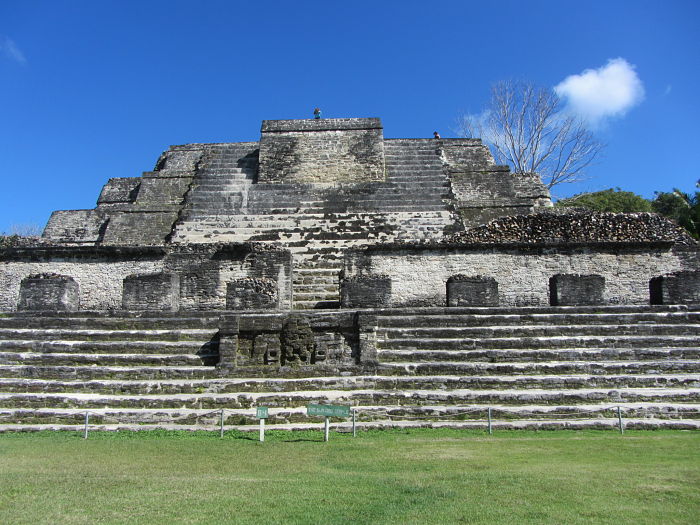 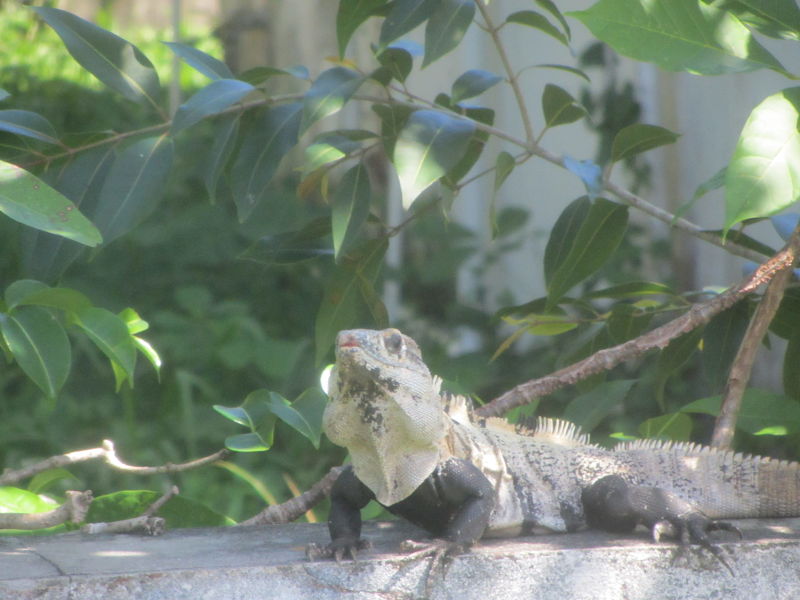 Driving through the rain forest areas as well as alongside residential homes we saw iguanas watching us.  There were small ones and large ones...lots of the critters were visible.