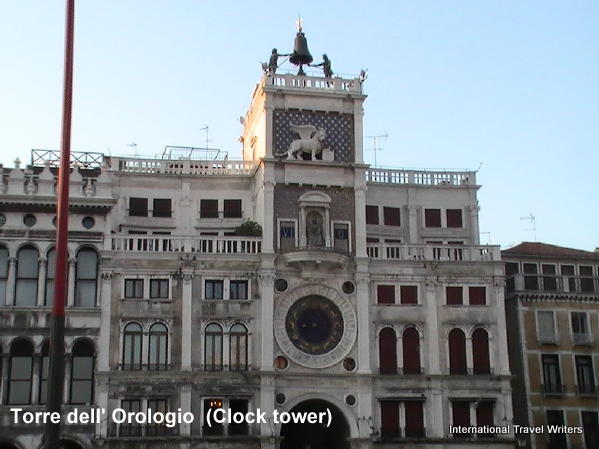 Many Venice landmarks reside in the Piazza San Marco such as the Basilica di San Marco, the Campanile & Palazzo Ducale that are shown on the Venice-San Marco page. However, there are many more.

Torre dell’Orologio (clock tower) is an early renaissance structure which is a tower with a clock and lower buildings on each side. The tower as well as the clock date from the last decade of the 15th century but as can be expected, the mechanisms have been altered and repaired numerous times over the years.

On the terrace at the top of the tower are two huge bronze figures, hinged at the waist, which strike the hour on a bell. They are always known as “the Moors” because of the dark hue the bronze has acquired.

Below this level is the winged Lion of Venice with an open book, before a blue background with gold stars. Originally there was a statue of the Doge kneeling before the lion, but in 1797 after the city had surrendered to Napoleon, this was removed by the French.

Continuing downward is a semi-circle balcony with statues of the Virgin and Child seated. On either side are two large blue panels shoing the time: the hour on the left in Roman numerals and the minutes on the right in Arabic numerals.

Twice a year, at Epiphany (Jan. 6th) and on Ascension Day (the Thursday 40 days after Easter) the three Magi led by an angel with a trumpet emerge from one of the doorways normally taken up by these numbers and pass in procession round the gallery, bowing to the Virgin and child, before disappearing through the other door. 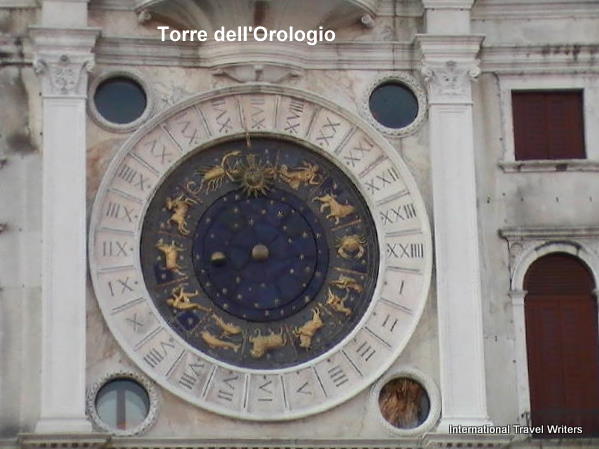 Below the Virgin is the great clock face in blue and gold inside a fixed circle of marble engraved with the 25 hours of the day in roman numerals. The golden pointer with an image of the sun moves around this circle and shows the hour of the day. Within the marble circle beneath the sun pointer are the signs of the zodiac in gold ( these are original and date from the 1490’s but were restored in 2006).

These revolve slightly more slowly than the pointer to show the position of the sun in the zodiac. In the middle of the clock face is the earth and the moon revolving to show its phases surrounded by starts which are fixed in position. There is a blue enamel background.

Below the clock is a two storey high archway. It is through this archway, another Venice landmark, that the street known as the Merceria leaves the Piazza on its way to the Rialto. In keeping with the efficiency that they had in those days, there is a clock on the back side of the archway for those returning from the Rialto to San Marcos Square.

However, it is less elaborate. Tours to the terrace on the roof, using the steep and narrow stairways inside the building, are available in English, Italian and French. You have to book well in advance. You will pass the clock mechanism on the way. The buildings on both sides of the tower have been privately sold off or leased since the 18th century.

Another of the Venice landmarks is the Rialto Bridge. The archway under the clock-tower mentioned above, starts the street known as the Merceria which leads from the seat government areas of courts and offices to the shopping and restaurant section known as the Rialto.

The Rialto Bridge had humble beginnings of being a simple pontoon bridge in 1181 and was replaced by a wooden bridge in 1255. After fires and several collapses there were numerous proposals for a bridge in stone but it took until 1591 before the present stone bridge was finally completed.

It actually remained the only way to cross the Grand Canal on foot until the Accademia Bridge was built in 1854. The arch was high enough to allow boats to pass under it. 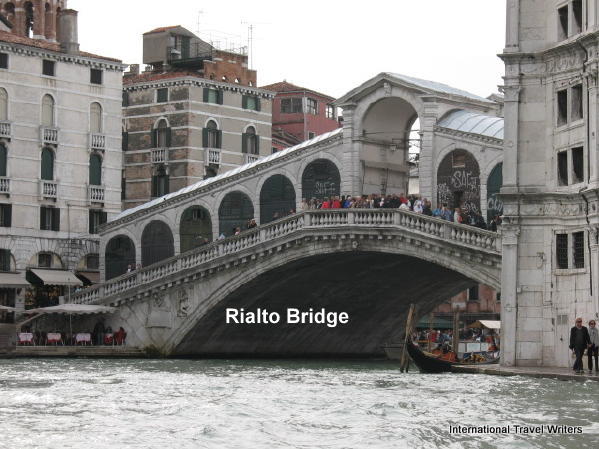 Two inclined ramps lead up to a central portico and on either side of the portico the covered ramps carry rows of shops ( a little cramped) which sell linens, Murano glass and even jewelry. There are of course numerous other items for the tourist market. On either end of the bridge there are restaurants which offer fine dining and bars for the casual stop to people watch. 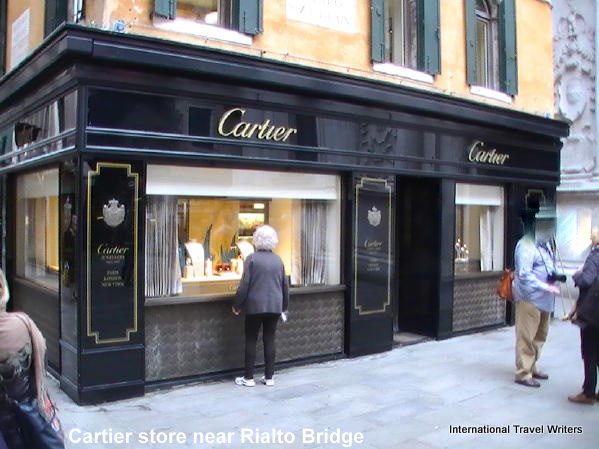 We were staying at the Hotel Colombina which is 3 bridges up the canal from the Venice landmark Bridge of Sighs so we decided to walk. Piazza San Marco was close to us so when we were near the clock tower we went through the arched passage under the clock and followed the upscale shopping streets known as the Mercerie.

It was like Rodeo Drive in Los Angeles, California and had Cartier amongst their choices. When we got to the Grand Canal we simply turned right and walked two blocks to the Venice landmark, the Rialto Bridge