Athens ...a timeless city of classical and historical significance 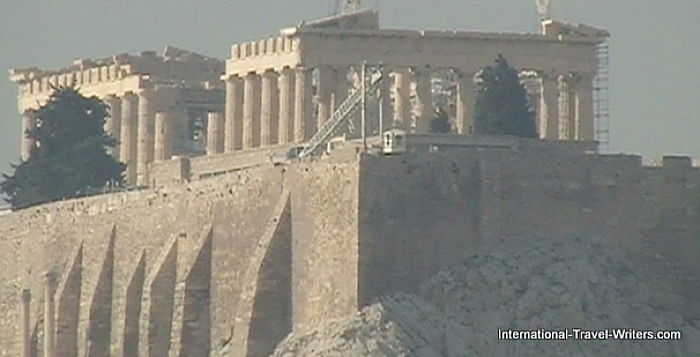 First, let me say that Athens is not a favorite city of mine even though the Acropolis and the Parthenon are breathtaking. I found it disconcerting to see all of the graffiti in the city. It was definitely a distraction and I wondered why it hadn’t been cleaned up considering how much Greece relies on tourism.

The fact that any Greek person, young or old, would defile their wonderful heritage and spoil a tourist’s memories of Athens…was beyond my thinking. Tourists are such a major industry (millions visit each year) it really is a shame to have people leave with that bad aftertaste…even the Acropolis doesn’t entirely overcome those lasting images. Thankfully however, the Greek Islands haven't been blemished in this manner.

With that being said, the natural beauty of the city, with such a grand location and its monolithic ruins is still something to be seen at least once. 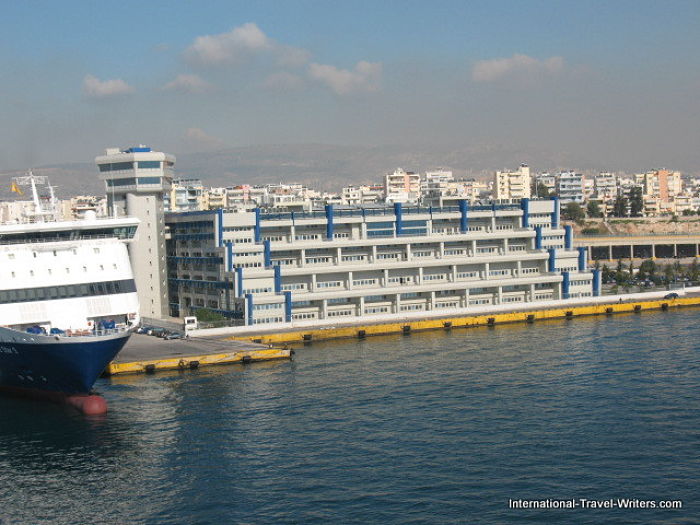 The port of entry for our ship was in Piraeus which is the port city located within the Athens urban area.  It lies along the east coast of the Saronic Gulf and dates back to the early 5th century B.C. In this modern era it has become the country's biggest harbor and the largest passenger port in Europe. 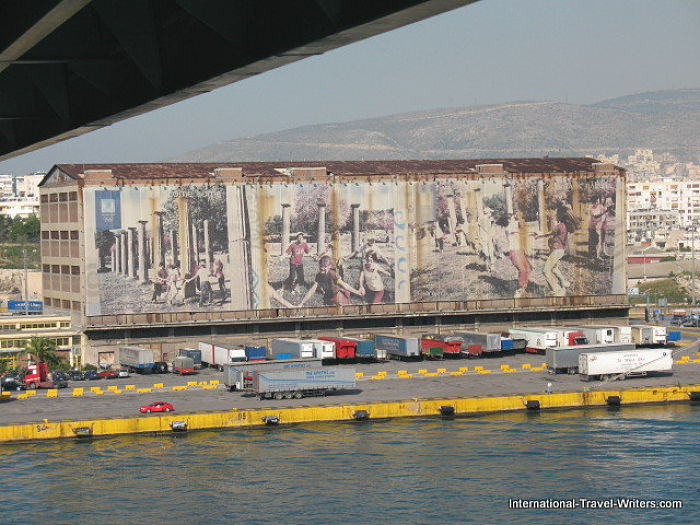 Active and bustling, this busy port displayed large murals along some of the otherwise plain buildings that lined the port area.  Also, there were Greek boys along the piers fishing so the assumption is that there is something to be caught in this vicinity. 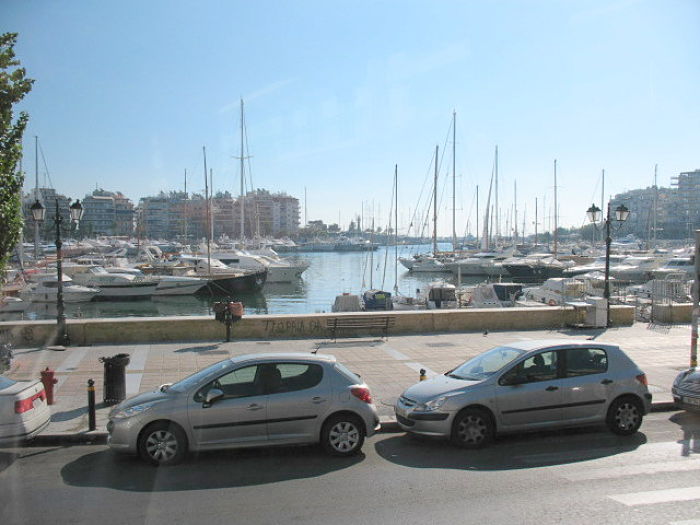 We were taken by motor coach through the picturesque marinas of Zea and Microlimino harbors while en-route to the center of Athens.  Zea is in the center of Piraeus and the marina's quayside is lined with bars, cafes and restaurants. 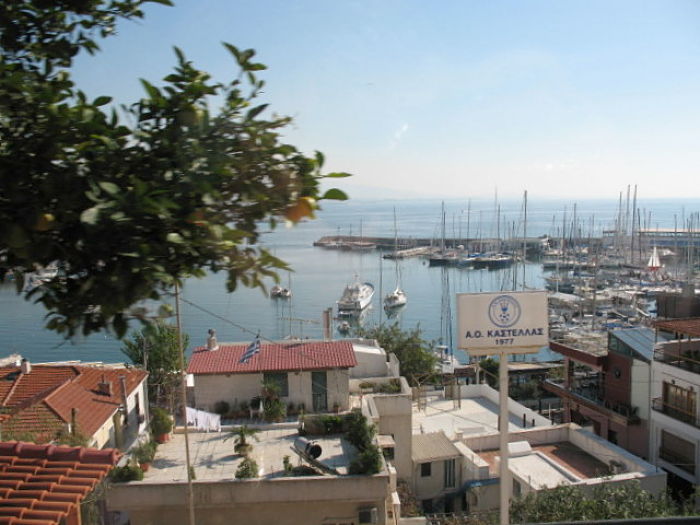 The marinas were bustling with activity because the weather was still warm and comfortable. The air was reasonably clean and fresh, unlike the experience that awaited us further up the road in the city metro area. 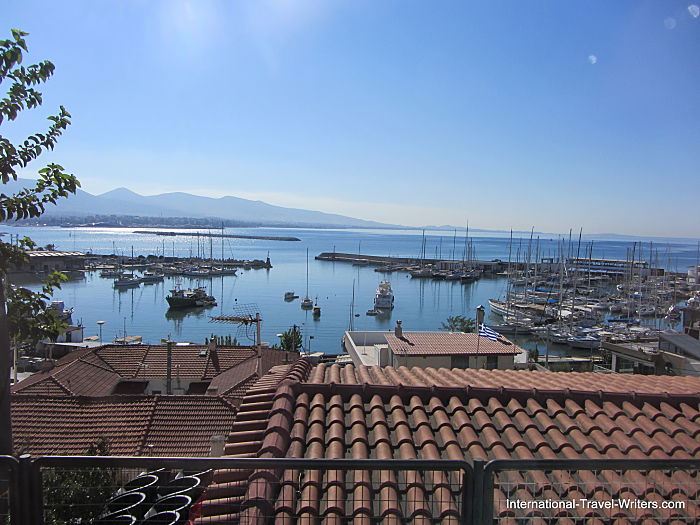 The vistas as we climbed the hill out of Piraeus were spectacular and the waters were serene and calm.  Trying to take photos of the marinas from a moving bus proved challenging. 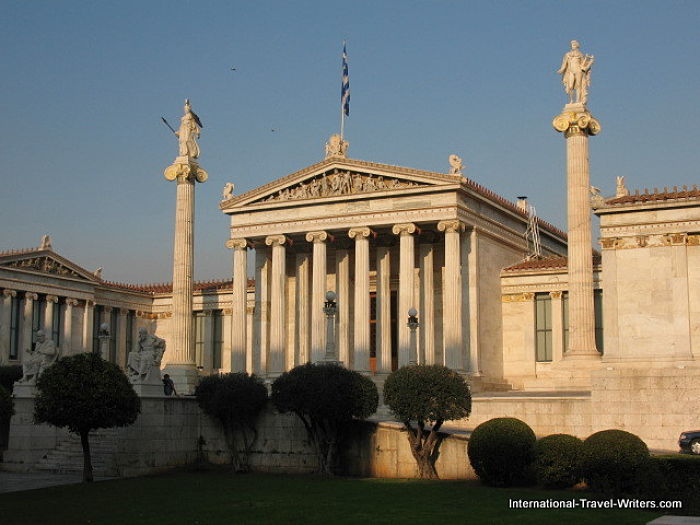 Landmarks of the modern era, dating back to the city becoming the capital of the independent Greek state in 1833, include the Hellenic Parliament (19th century) and the Athens Trilogy consisting of the National Library of Greece, the Athens University and the Academy of Athens.

The Academy of Athens is the highest research establishment in the country. It was established in 1926 and is one of the major landmarks. The organization of the Academy of Athens, whose title dates back to the ancient Academy of Plato, is divided into three Orders: Natural Sciences, Letters and Arts, Moral and Political Sciences. The building was designed as part of an architectural “trilogy” in 1859, along with the University and the national Library.

The Helenic Parliament (photo below) was also the former Royal Palace.

The timeless, classical city of Athens was a powerful city-state in the 5th century BC. For us, it conjured up visions of what living in that era would be like. It was a center for the arts, learning and philosophy, and home to Plato’s Academy and Aristotle’s Lyceum.

It is widely referred to as the cradle of Western civilization and the birthplace of democracy, largely due to the impact of its cultural and political achievements during the 5th and 4th centuries BC on the rest of the then known world. It was eventually overcome by its rival city-state Sparta. 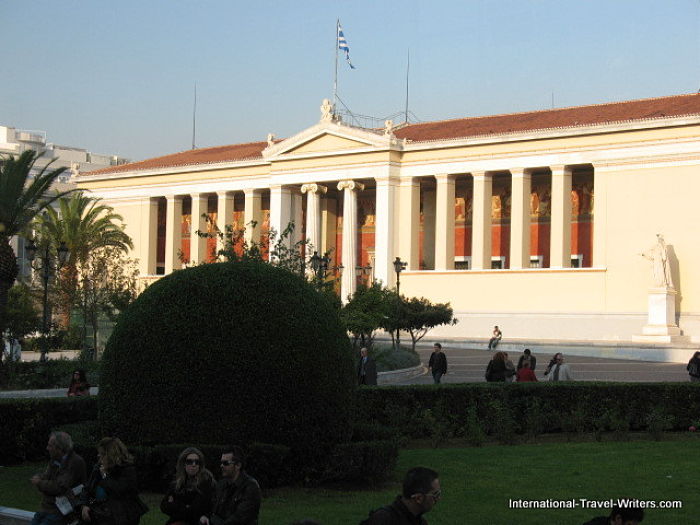 Athens experienced a decline followed by recovery in the second half of the Middle Byzantine Period (9th-10th centuries AD), and was relatively prosperous during the Crusades, benefiting from Italian trade. In 1453 it was conquered by the Ottoman Empire and entered a long period of decline.

After the Greek War of Independence, Athens was chosen as the capital of the newly independent Greek State in 1834, largely due to historical and sentimental reasons. These all join together to paint a vivid picture of the city’s long and colorful history across the centuries. 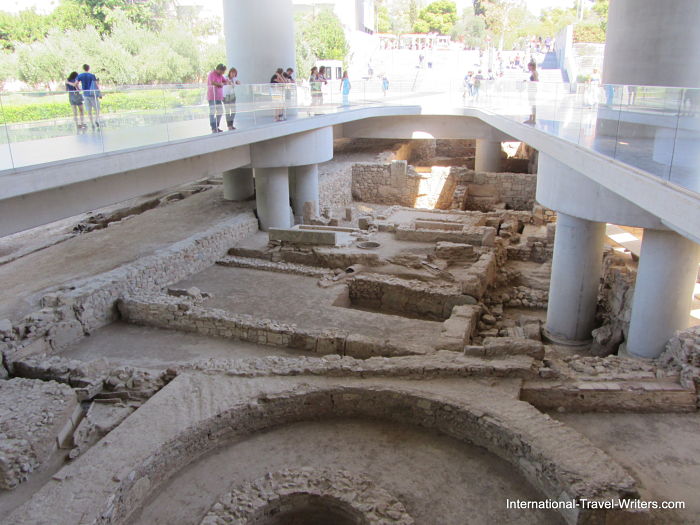 Athens is home to the Acropolis Museum and also the National Archeological Museum featuring the world's largest collection of ancient Greek antiquities.   We had the opportunity to visit the Acropolis Museum in 2012.  It was newly opened during our prior visit to Athens in 2009 but we didn't have time to see it then.

What makes this museum rather unique is that it is built over the top of some ruins of ancient Athens and you could look below prior to entering the building. 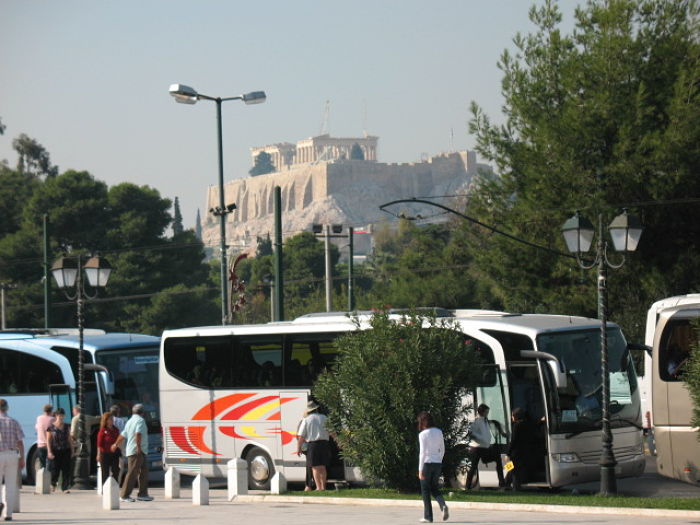 Athens is home to two UNESCO World Heritage sites, the Acropolis and the medieval Daphni Monastery.  The heritage of this Greek city is mind-boggling and the classical evidence is easily viewed by gazing at the monuments and works of art and volumes of ancient literature.

The most famous is the Parthenon which is perched atop the Acropolis.  Our tour bus stopped for us to view a different landmark and in the distance we could see where we were headed. 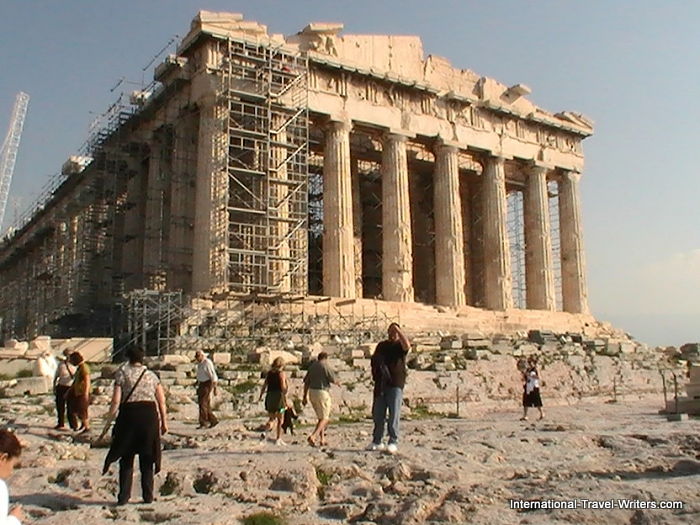 The Acropolis is a flat-topped rock that rises 490 feet above sea level and has a surface area of approximately 7 miles. The Parthenon is widely considered a key landmark of early Western civilization. Athens also retains a vast variety of Roman and Byzantine monuments, as well as a collection of remaining Ottoman monuments. 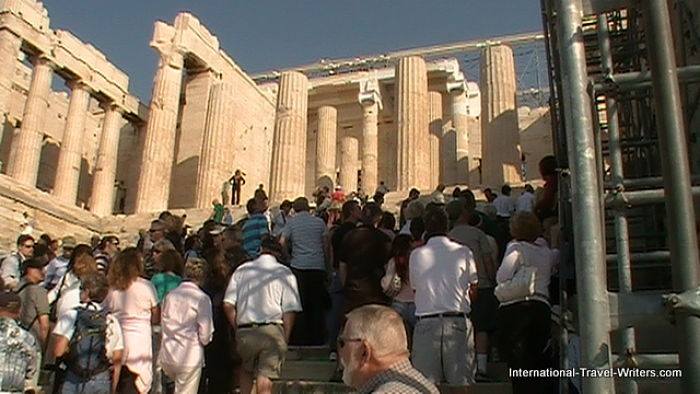 The crowds were gathering as the buses disembarked each new group arriving to climb the staircase of the Acropolis which is long and winding. My husband handled it easily but it was more difficult for me to ascend that many stairs. At least I had the company of a few other ladies that were taking it slow also.

A World War 2 Monument has a plaque dedicating the bunker-like structure to Allied forces during the war years.  This is on the top of the Acropolis. 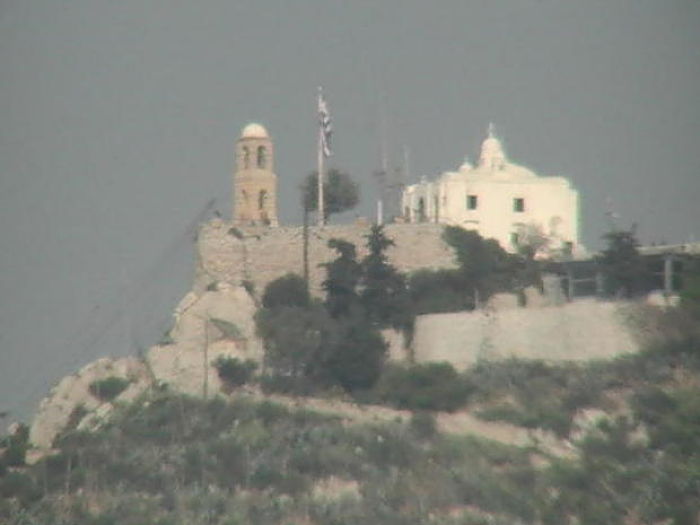 We were told that the highest hill in Athens is Mount Lycabettus which is well over 900 feet above sea level. This is a popular tourist destination and can be ascended by the Lycabettus Funicular which climbs the hill from a lower terminus at Kolonaki. Or, if you're young and energetic, you can climb a zigzag path through the foliage to arrive at the top. Hiking up hills doesn't fire up my engine, but it might for you.

At the top you will be rewarded by finding a small, white, 19th century Orthodox Church called Chapel of St. George. A selection of stone terraces allow you to have panoramic views of the city, the sea and surrounding mountains...it's a captivating, all encompassing vista spread out before you like a masterful painting sprawled on a canvas. The smog was so thick it was difficult to get a clear photo.

Since the city is nestled in the mountains and has the Saronic Gulf on one of its sides, it causes a temperature inversion phenomenon which, along with the failure of the Greek Government to control industrial pollution …causes horrific smog that can sting the eyes if there isn’t a breeze.

This has been doing tremendous damage to cultural sites such as the Acropolis and Parthenon and work to restore the monuments and prevent further damage is a Herculean task.

On the top of a hill called The Hill of the Nymphs is the new Athens Observatory which is a landmark in this historical city that is facing the Parthenon. The original part of the Observatory was built in 1842 and because the Hill was famous from antiquity, the decision to place it there was deemed to be expedient.

Today it operates five Research Institutes, providing facilities for graduate student training in collaboration with both Greek and foreign Universities. It not only hosts the UNESCO Chair for Natural Disasters but also operates the National Seismological Network.

It houses clocks, telescopes and other instruments of the 19th century in its Astrogeophyics Museum. We assumed that they had sophisticated equipment that could handle the less than perfect conditions with all of the smog.

Widespread measures were taken throughout the 1990’s to improve the quality of air over the Attica Basin but it’s still a problem since the transition of Greece from an agricultural to an industrial nation. We found that it stung the eyes a bit and reminded us of Los Angeles, California on a smoggy day. 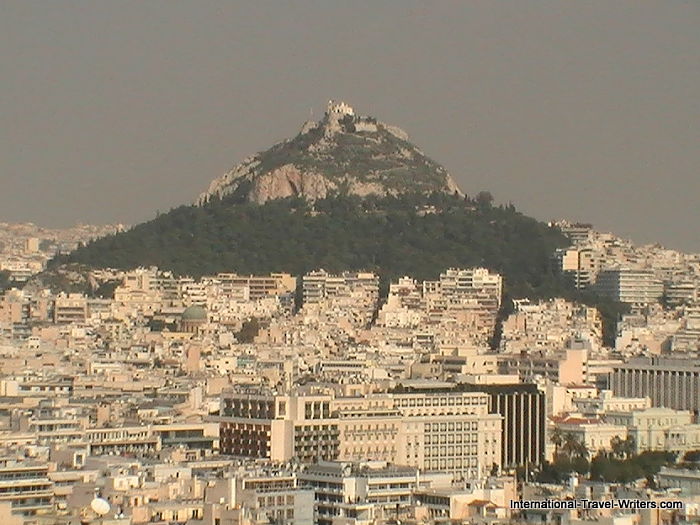 Plaka is a district lying just beneath the Acropolis. It’s famous for its plentiful neoclassical architecture. It remains a traditionally prime tourist destination with a number of tavernas. You can see Mount Lycabettus dominating the background.

Another district nearby is Monastiraki which is known for its string of small shops and market stalls that are brimming with the products of the season as well as tavernas specializing in souvlaki.

Lying just west of Monastiraki is Thission which is home to the ancient Temple of Hephaestus standing atop a small hill. This area also has a picturesque 11th Century Byzantine church, as well as a 15th Century Ottoman mosque.

The Temple of Hephaestus is the most complete surviving example of a Doric order temple while the Parthenon, in its day was regarded as the finest. The Parthenon is undergoing massive restoration and cranes, scaffolding and workers are visible throughout the area.

These charming historic districts at the foot of the Acropolis still have picturesque ruins from the city’s Roman era. We did a bit of shopping here and found a lot of items that had the Greek designs that we found attractive.

We walked past and browsed a lot of wonderful outdoor cafes, a few had stairs leading under the pavement to a larger, basement dining room. We found a café that looked interesting and stopped to rest, also stopping the hunger pangs.

There is a pedestrian-only promenade with wide paths that leads from the bottom of the Acropolis to other top attractions such as the Agora (marketplace), Theater of Dionysus and the Temple of Olympian Zeus. You can meander leisurely on foot...the same as centuries of Greeks have done. 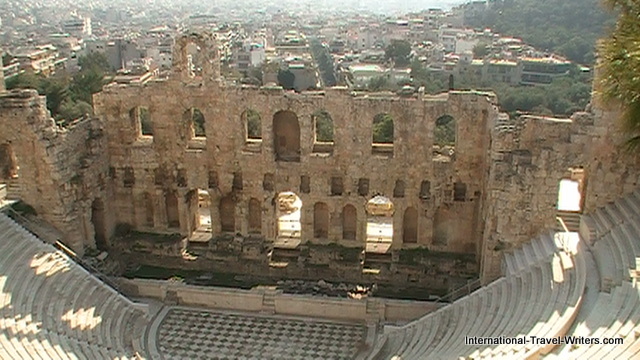 The Odeon of Herodes Atticus is a stone theatre structure located on the south slope of the Acropolis. It was built in 161 AD by Herodes Atticus in memory of his wife. It was originally a steep-sloped amphitheater with a three-story stone front wall and a wooden roof, and was used as a venue for music concerts with a capacity of 5,000. 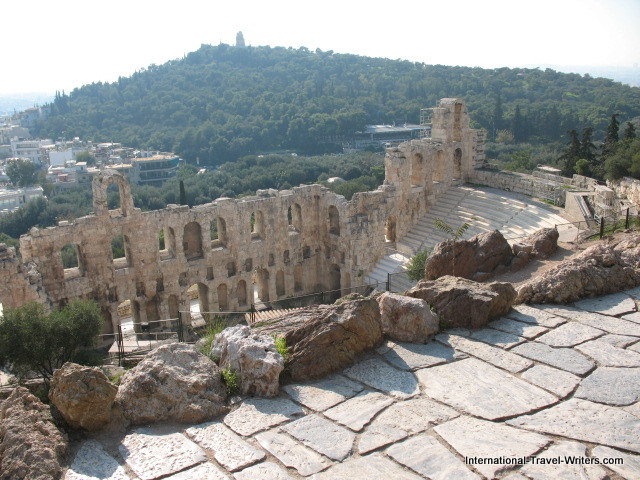 The seating and the stage were restored using pentelic marble in the 1950s. Since then it has been one of the main venues of the Athens Festival, which runs from May through October each year. The Odeon has hosted such performers as Maria Callas, Sting, Nana Mouskouri and even Elton John. They also had the televised concert by Yanni in 1993 which I was fortunate to see when it was broadcast on public television. 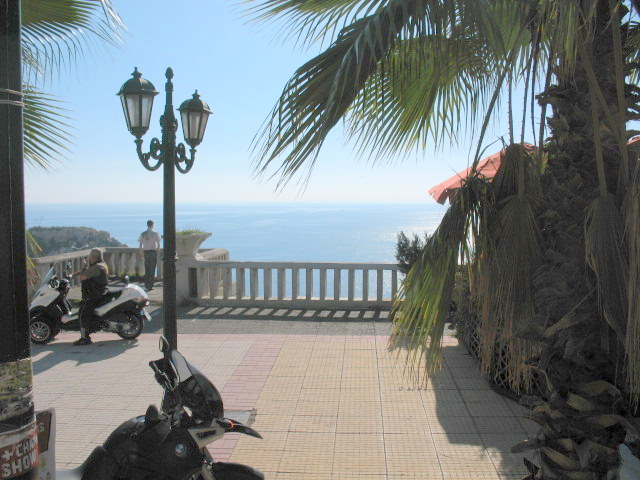 We had been busy with the sightseeing, and we were tired from the walking but we had taken time for an interesting lunch when we were in the Plaka district. The gyro was as authentic as we'd ever had.

The day was ending and the drive back to Piraeus was still interesting although we looked forward to returning to the ship which would set sail in a few hours. Tomorrow was Ephesus(Izmir), Turkey with a different selection of historical sites.